ToolGuyd > DealGuyd > Deal: Rockwell Jawhorse Work Clamp & Support for $99
If you buy something through our links, ToolGuyd might earn an affiliate commission. 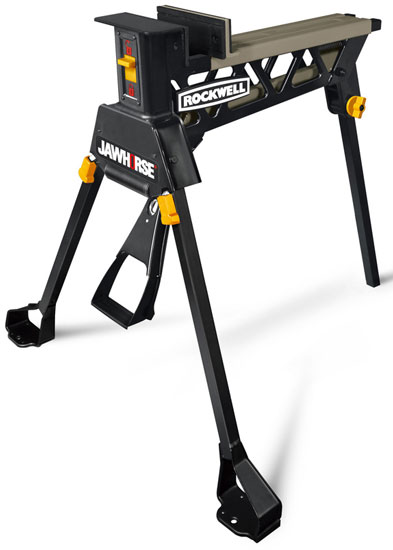 Father’s Day is just weeks away. How can I tell? Because Rockwell’s Jawhorse work clamp and support has dropped in price to $99 on Amazon. It’s normally priced at $140-150.

I tested an older version of the Jawhorse once, and for the most part it worked great. Then I tested the larger Sheetmaster Jawhorse, and that one was great too. I have since revised my feelings on its mobility – roll it too fast and it’ll rock – but for the most part it’s a handy device.

The Rockwell Jawhorse, with this version being model RK9003, is a hands-free 3-legged work clamp that can support up to 600 pounds. Its clamping jaws can be opened as wide as 37″, and it can exert up to 2,200 pounds of clamping force. The Jawhorse folds up for easy transport and storage, and weighs just 43 pounds.

Rockwell offers quite a few optional accessories that enhance the Jawhorse’s functionality, such as plywood sheet and log-gripping jaws,  a tool tray, a saddle bag for out-of-the-way tool storage, as well as miter saw station and mini work table drop-ins that both look to have been discontinued.

We don’t know when the promo pricing will end, but it might be after Father’s Day or when a certain number of units have sold.