ToolGuyd > Power Tools > Cordless > Ryobi Auto Hammer Hands-on Review
If you buy something through our links, ToolGuyd might earn an affiliate commission. 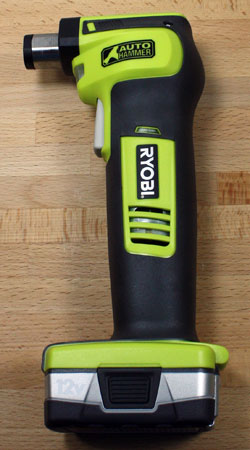 Ryobi’s cordless Auto Hammer is designed to drive nails up to 3-1/2″ long, operate in tight spaces, and eliminate manual hammering entirely. In fact, Ryobi claims that with their new Auto Hammer, hammering has never been easier. With claims like these, we just had to put the tool to the test!

For a detailed overview of the Ryobi Auto Hammer, check out our preview post from when it was first released. Keep reading for the full review, or skip ahead to see our conclusions. 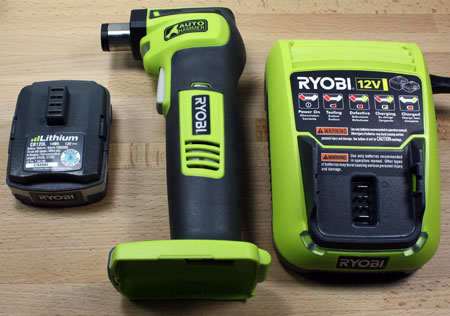 Upon opening the Auto Hammer’s box, we found a very nice soft case with velcro straps and mesh pockets, similar to the case included with the previously reviewed Milwaukee M12 drill. Ryobi includes a single 12V lithium ion battery and a dual chemistry charger with the tool.

Although the Auto Hammer is mostly composed of plastic, it feels very solidly built. There are a few smooth surfaces, but the majority of the tool is covered with a soft rubbery texture that allows for a comfortable and secure grip. Overall, based on appearances and feel alone, the Auto Hammer’s review was off to a great start. 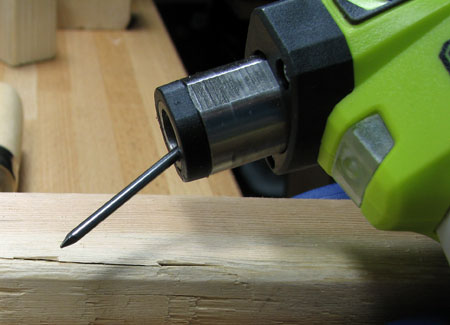 Before we get to talking about the actual operation of the tool, we wanted to point out a few key features, mainly the magnetic nail guide and retractable sleeve. 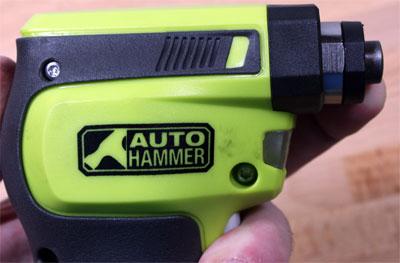 The retractable sleeve moves in and out relatively smoothly, and retracts beyond the operating position of the hammer’s anvil to ensure that nails can be driven flush to the work surface.

There is also a white LED above the trigger and below the anvil that helps illuminate work areas. The LED emits a fairly bright and broad beam, but it won’t be mistaken for a standalone work light or headlamp. 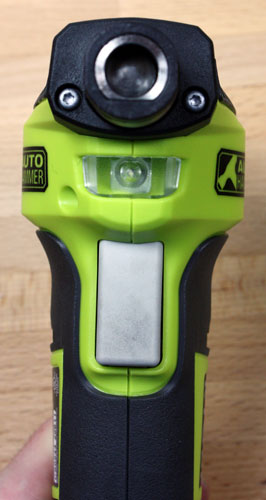 The absolute first thing that we noticed is that there is no safety switch, only the trigger. However, after a few squeezes of the trigger, we realized that the hammer’s anvil will not engage unless it is in physical contact with and pushing down on a nail. This internal safety feature, combined with the fact that the Auto Hammer’s anvil is recessed within the retractable sleeve, ensures that there shouldn’t be any accidental hammerings under normal circumstances.

As soon as the battery was charged and ready to go, we decided to push the Auto Hammer to its limits and attempted to drive 16D 3-1/2″ bright common nails into a 2×4 stud.

The first thing we noticed was that the Auto Hammer is very loud, well beyond the point at which hearing protection is optional. It is important to note, however, that individual strikes by the Auto Hammer do not seem to be substantionally louder than those by a manual hammer. Instead,  it is the rapid succession of impacts that is almost intolerable without hearing protection. The Auto Hammer is rated at 3600 BPM, but we could not verify if this actually translated to 60 strikes per second. 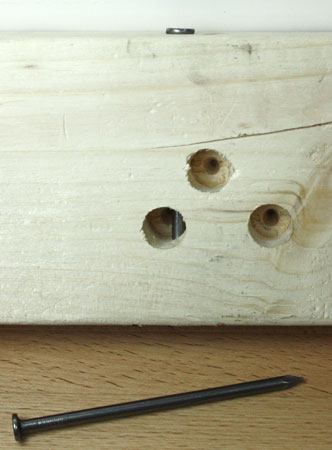 We averaged the time it took us to drive a handful of 3-1/2″ bright common nails, and it came down to about 40 seconds per nail. Trust us when we say that you probably won’t want to drive many 3-1/2″ nails consecutively. The Auto Hammer is relatively lightweight, so when the workpiece starts to strongly resist a large nails’ inward progression, you’re going to feel vibrations and counter forces in your hands. If you’ve ever used a hammer drill, these vibrations are stronger and more exhausting.

If given the choice between the Auto Hammer and a nice sized framing hammer to drive large nails, we’re going to go with the manual framing hammer. Yes, this would require greater physical exertion, but at least then we’d be able to work at a more comfortable pace. Our choice might change if the Auto Hammer version 2.0 features a variable speed trigger.

When driving smaller nails, though, the Auto Hammer works beautifully well, and is almost a pleasure to use. The tool is still quite loud, and we still feel vibrations transmitted to our hands, but to a much lesser extent.

The video above shows the Auto Hammer being used to drive a few smaller sized nails. The 2×4 wood stud was clamped on one end, but really should have been better clamped. In further tests with a better clamped workpiece and while testing larger nails, the vibrations were transmitted to and throughout the supporting table, and when tested indoors the vibrations were felt in the next room.

There were many things that we liked about the Auto Hammer’s look, feel, and overall quality. It had great ergonomics, and there a few minor touches that we appreciated: the included soft tool bag, the 12V charger with indicator LEDs  and a legend to help diagnose charging issues, and the slim lightweight 12V battery with its nice grippy bottom. 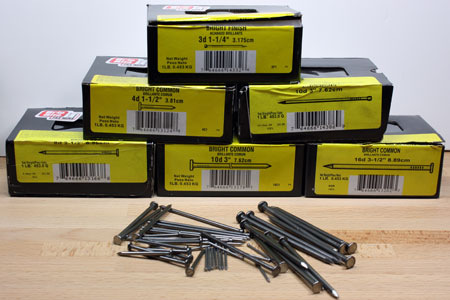 Ryobi’s Auto Hammer is a well built tool with subtle details and features that make it very user friendly, or at least until one tries to hammer in some large nails. We tested the Auto Hammer on bright common and finish nails from 3D (1-1/4″), to 16D (3-1/2″) in size. Logically, smaller or thinner nails proved to be much easier for the Auto Hammer to drive than the larger ones.

Although we validated Ryobi’s claim that the Auto Hammer can be used to drive 16D (3-1/2″) common nails, that’s not something that anyone will enjoy doing. Attempts to drive 16D common nails resulted in extreme tool and hand vibration that cannot be comfortably sustained for too long. This usually started happening during the final 3/4″ or so with vibrations getting worse as the nails were driven even deeper.

We would recommend Ryobi’s Auto Hammer as a considerable option for those looking to primarily drive finish nails or smaller common nails in tight spaces. For those looking to drive many larger nails, we would instead recommend alternative options, such as pneumatic palm nailers or nail guns, or hose-less electric and powder actuated nailers.

By no means is the Auto Hammer a bad tool, but it is of more limited realistic use than we would have liked to have seen.

At $59, Ryobi’s Auto Hammer will definitely be more appealing to potential customers than it was at $90, and this should also give it an edge against the nearly identical Craftsman Auto Hammer.

Ryobi’s Auto Hammer is typically priced at $90 at The Home Depot, but it appears to have dropped in price recently to $59.

We would like to thank Ryobi for providing the sample Auto Hammer for this review.