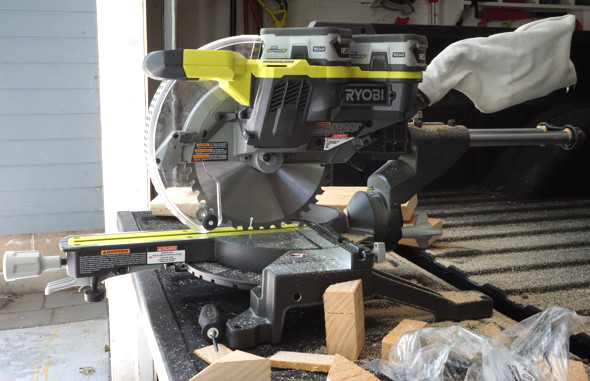 I received a test sample of the new Ryobi ONE+ONE cordless 10″ sliding compound miter saw last Summer (2017). As I started my initial testing, I ran into problems with the saw not being calibrated properly, and found some other annoying quirks.

Most of the issues I encountered can be corrected, with a little knowledge of how to calibrate a miter saw, but after you read my review you’ll have to ask yourself if this saw worth the trouble. To give you a little preview, I think it could be, in the right situation.

Since I needed to calibrate the saw, a portion of this review will also show the calibration process I used, but before I go into the calibration and other issues, let’s start out by reviewing some of the specs:

The miter saw is available at Home Depot as a bare tool for $299, and includes a 10″ 40-tooth carbide blade, dust bag, work clamp, and blade wrench. If you don’t already own any Ryobi 18V batteries or a charger, you’ll have to spend at least another $100.

You’ll also probably have to order it online. At the time of this post (almost a year after the saw was released), it’s only available at one out of the 20-some Home Depots within a 100 miles of me, and that store is 86 miles away.

One nice feature of the saw is that just about everything can be adjusted with the on-board wrench/screwdriver. It is stored behind the fence, through a rubber grommet that keeps it in place and prevents it from rattling.

This 5mm/#2 Phillips tool is what you use to move the blade guard, change the blade, adjust the laser, square the fence, and calibrate the scales. It can adjust everything except the bevel angle zero stop; for some reason, that requires a different sized hex key. 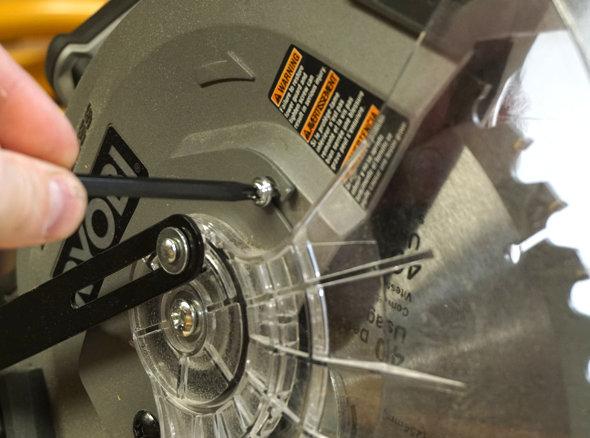 Once you get the blade guard out of the way, changing the blade is easy. You just push in the arbor lock and turn the blade until it engages. Then you remove the arbor screw clockwise because it is a left-handedf screw (this confuses me for a second on every miter saw). 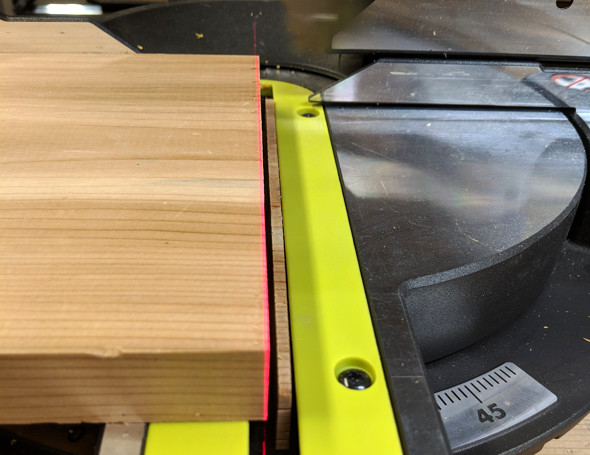 Right out of the box I noticed that the laser cut line wasn’t accurate. You can see above how it isn’t quite square to the cut line. The laser is split by the front of the board, but is well to the left of the kerf at the rear of the board.

It’s easy enough to adjust the laser, you just take the handy dandy screwdriver/hex key L-wrench and stick the screwdriver into the laser adjustment hole on top of the blade.

I played with the laser adjustment for quite some time, and I was able to straighten out the laser so it was parallel with the kerf, but I was never able to move it so it overlapped the edge of the kerf exactly.

To be honest I’ve never really found a shadow line or laser cut line that was perfect, so when I’m trying to make a precise cut, I’ll always line up the pencil mark with the teeth on the blade.

After the first few cuts I noticed that the saw wasn’t cutting straight up and down. The bevel indicator was showing 0°, but the bevel angle was clearly not 0°. 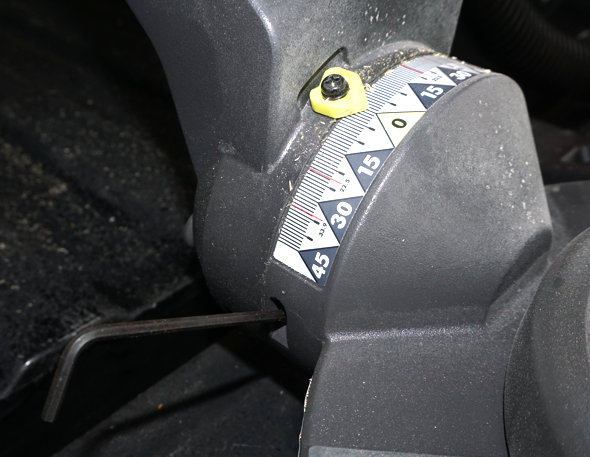 There’s a 3mm hex set screw on the side of the saw that you can adjust the 0° angle stop. There’s also a 45° stop adjustment screw that is out of sight. It’s a little frustrating that I had to go grab a different wrench. 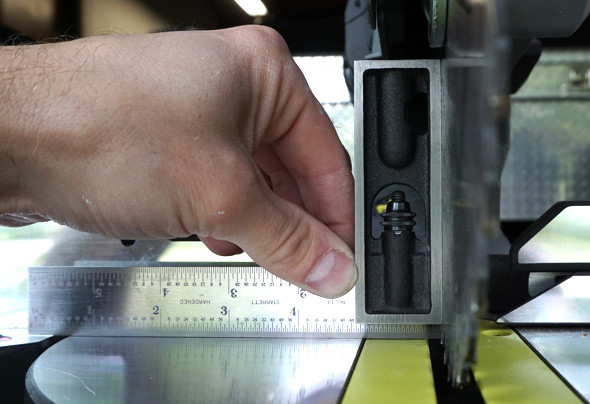 I used a square to check the angle between the table and the blade. I thought I had the bevel angle adjusted perfectly, but my cuts were telling me differently. 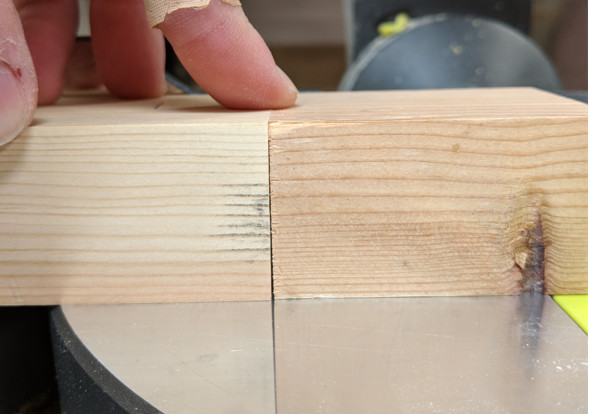 A good way to check whether a cut is square, is to make a cut with the saw and then flip the waste piece over. This will double the error and you’ll see an exaggerated gap. I just couldn’t figure it out – my square was telling me the blade was square to the table, but my cuts were still off. That’s when I started looking at the table itself and found the first real problem. 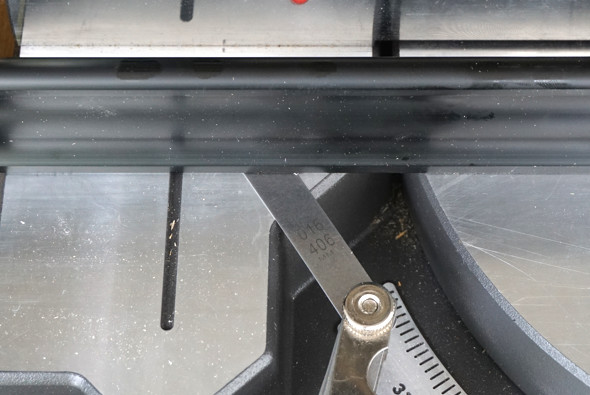 I checked out my Dewalt miter saw and a test sample I have from Milwaukee, and the tables on those saws weren’t perfectly flat either, but they were better than the Ryobi saw.

At this point I could either try to grind the table flat, shim the table, or just get on with the testing because it’s close enough. I’d already wasted a bunch of time on this, so I decided to move on. 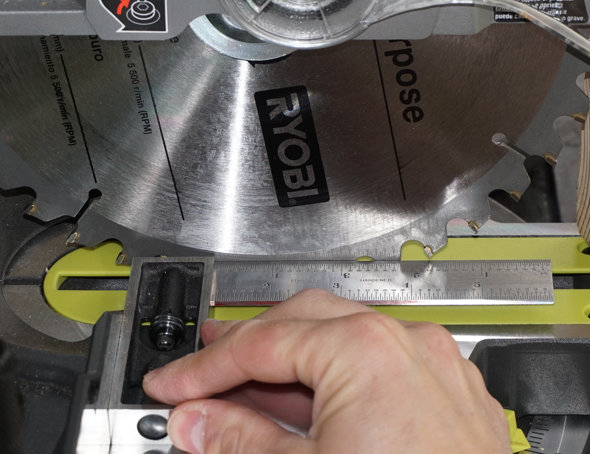 Once I fixed the bevel angle issue, I started noticing another issue. The blade was square with respect to one side of the fence, but if I checked the blade against the other side, it wasn’t. This means that the two sides of the fence weren’t parallel with each other.

Since one side was already square to the blade, I loosened the two bolts on the opposite side just enough to where I could move the fence if I pushed or pulled hard. Then I used the blade as a reference and set the fence to 90° with with my square and tightened the bolts. Alternatively you could use a straightedge across the back of the fence. 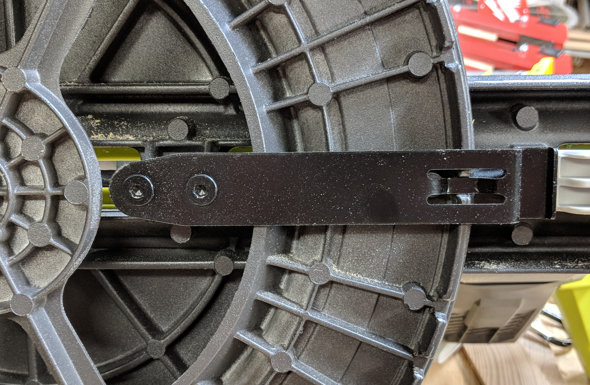 If  both sides of the fence aren’t square to the blade, you should probably adjust your miter stops first. At first I couldn’t find any miter stop adjustment because the stops are cast into the rotating table itself, but if you flip the saw over there are two 4mm head screws holding the stop. You’d loosen those, flip the saw back over and square the blade to the fence and tighten the knob. Then go back under the saw and tighten those screws. Just be sure to adjust your miter scale when you are done. 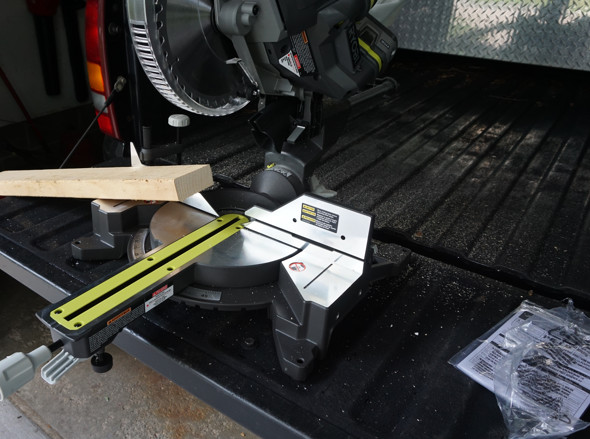 After the sawdust explosion that is the Milwaukee 10″ cordless miter saw, one of the things I’ve been really watching for is dust collection. So it’s pretty much the first thing I tried when I unpacked the Ryobi One+One miter saw.

Above you’ll see how much dust the saw spits out while cutting a single 2×4 with just the dust bag attached. The bag alone didn’t perform too badly. Most of the sawdust ended up behind the saw with only a little in front or off to the side. 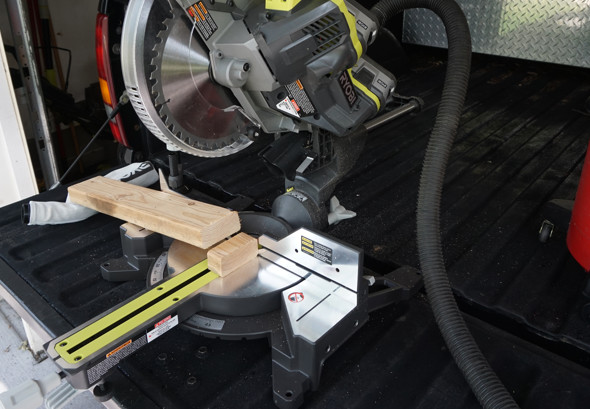 The dust port on the back fits a 1-1/4″ hose, so I pulled out my little shop vac to compare the results. After cleaning up all the sawdust from the saw and my truck bed, I attached the vacuum to the dust port and cut another 2×4.

The difference is marked. While there is a little bit of dust that you can’t see because of the small photo size, you can still tell the difference made by attaching a vacuum. 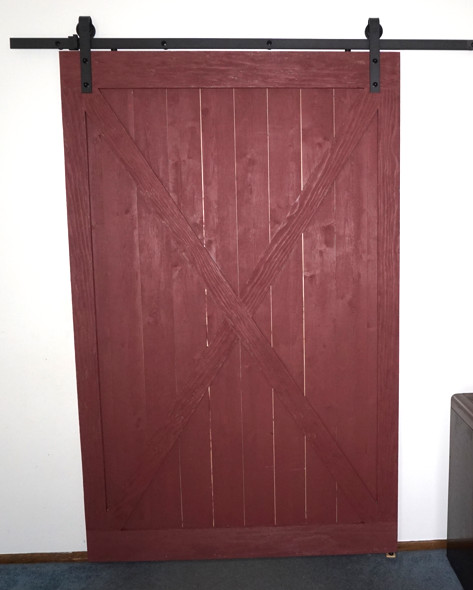 Once I had fixed all the calibration issues with the miter saw, it was cutting accurate enough to tackle my first project: making a sliding barn door for my son’s room.

The saw worked well for this project and the cuts were accurate enough that I didn’t have any problems with pieces being out of line when I put it together.

When I started using the Ryobi saw for finishing the trim in my hallway, I got frustrated with the fit of my miters. The bevel error was preventing the joints from closing. So I started using my old 12″ Dewalt miter saw. Things went much better after that.

I did spend quite a bit of time fiddling with the saw, trying to shim the table so it was flat, but I gave up and decided only to use it for rougher work.

The most challenging test I put to the saw was cutting a piece of  8/4 ash that was 7″ wide. It’s no wet 4×6, but it’s probably more than most people will cut with the saw. In my quick demo video, you can hear the saw growl a little as I get into the meat of the wood, but at no time does it really seem to have difficulty.

I had already already swapped the included 40- tooth blade for a 60-tooth blade, because the 40 tooth was leaving quite a bit of tearout. This test wasn’t on fresh batteries either. I had made quite a few cuts already and the 4.0Ah P108  batteries’ fuel gauges were showing 3 out of 4 bars remaining.

Can you expect a lower cost, consumer grade miter saw to be calibrated perfectly out of the box? I don’t know, but if you want to get the best performance out of any miter saw, you’re going to want to check its calibration every once in a while, as even the best saws can go out of square.

Before I summarize the issues I had with this saw, lets look at what I liked about it:

Here are the problems I had with the saw:

I didn’t get a chance to mention it above, but the head sliding on the rails is a little stiff. It takes more effort than I would like to get it moving, and when you do it isn’t as smooth as I think it should be.

Now here’s the hard part, would I recommend this saw? If you are doing indoor trim work or fine furniture, it might be possible to set up this saw to do a good job, but you’re probably going to be better off with another saw.

If you are framing, building a deck, or even making some patio furniture, and you don’t mind spending some time to set the saw up properly — it’s light, powerful, and it’s inexpensive compared to other saws in it’s class.

Would I buy this saw? Not if it was to be my only miter saw. Despite not trusting it for trim work, I find myself using it for small jobs, like cutting a few 2x4s or making larger cuts that are awkward on a table saw or a non-sliding miter saw. It is really nice to be able to carry a 10″ sliding miter saw where I need it without straining or bruising myself in the process

Thank you to Ryobi for supplying the review sample unconditionally.