ToolGuyd > Power Tools > Chargers > Has Ryobi Given up on Wireless Cordless Power Tool Charging Tech?
If you buy something through our links, ToolGuyd might earn an affiliate commission. 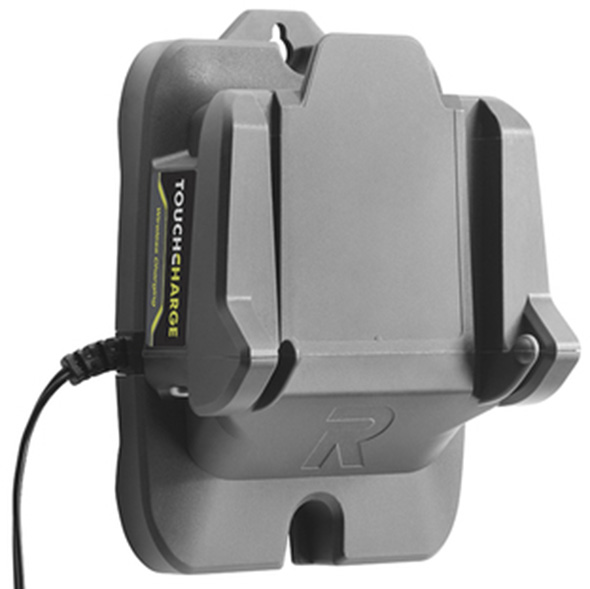 Nearly two years ago, I posted about Ryobi TouchCharge wireless charging tech, and wondered about what other cordless power tools it might work with.

At the time, Ryobi introduced their TouchCharge wireless tool/battery charging tech with their cordless underwater vacuum, and I found a trademark application that included a wide range of other types of tools.

Naturally, this led me to assume that Ryobi had a roadmap for their TouchCharge tech.

Bosch had previously come out with a wireless charger, charging cradle for certain drills and drivers, and compatible batteries.

Ryobi’s approach was a very different one, with the wirelessly-charging tech built into the tool itself. Their TouchCharge vacuum has a sealed battery compartment, and so you can charge the battery while it’s attached to the tool, or it could be removed for charging on a traditional Ryobi 18V One+ charger.

But, the TouchCharge vacuum is also a $189 tool.

It is a neat concept, being able to charge the battery in-tool, or via traditional means. I can definitely see this being useful for some tools, but is it a system that customers will buy? Is it practical?

Two years have passed and we have not seen any new TouchCharge tools or accessories from Ryobi. Does this mean they’ve given up on the idea? Perhaps they’re still refining it?

I’ve been trying to think about what types of tools this would work best with. Lawn and garden tools? Woodworking or construction-focused tools? Or only portable hand-vacs?

The fact that wireless charging tech has to be built into the tools complicates things, and also drives up the price.

It is also possible that Ryobi’s TouchCharge system, at least as spelled out in their trademark application, could take different shapes and forms.

I was fixed on what we had seen so far – the pool vac’s wall-mounted wireless charger, but could there be other forms?

Ryobi has had small cordless tool and equipment systems before; perhaps a new TouchCharge platform would be similar, with small tools that can all be recharged on a Ryobi wireless charging pad?

A hypothetical TouchCharge charging pad might be large enough to recharge several devices at once, or devices of several sizes, as well as smartphones equipped with compatible tech.

Hmm, that would actually be convenient, and it might not necessarily lock users into only being able to use the Ryobi charger. So if you have a favorite worklight, for example, you can charge it at your workbench (or the tool cart idea referenced in the trademark application), or a standard wireless charger at a different location.

Yes, that makes more sense. Ryobi’s trademark application also referenced headphones. Things like headphones, infrared thermometers, laser distance meters, and the such – these don’t seem like they’re the right size for the wall-mounted TouchCharge adapter that was introduced with Ryobi’s pool vacuum. A bench, shelf, or cart-mounted charging pad seems like a better idea for tools like that, and where the battery being charged is small and built-in, as opposed to being an 18V One+ battery as with the pool vac.

Ryobi’s last attempt at measuring tools and tool-related devices (for lack of a better way to put it) was somewhat short-lived. Things are very different today though, such as with Bluetooth being used for smartphone device connectivity instead of wired tethers. Perhaps TouchCharge will be featured in the next-generation of Ryobi compact tools, instruments, and accessories?

Has Ryobi given up on wireless tool charging tech? Hopefully not, but time will tell what they’re planning, if anything. It’s possible the trademark application was broad and wide-reaching and not reflective of Ryobi’s real product roadmap or plans.

What do you think about a hypothetical new Ryobi small tool and equipment system where everything is recharged via wireless charging pad?