ToolGuyd > Hand Tools > Layout & Measuring > Ryobi’s New Whole Stud Detector
If you buy something through our links, ToolGuyd might earn an affiliate commission. 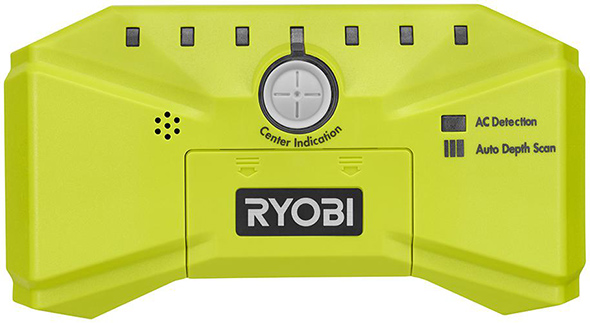 Ryobi recently announced a new “whole” stud detector, model ESF5000. Like the Precision Sensors Profinder 5000 I reviewed 2 years ago, the EFS 5000 uses a series of LED’s along the top to show you where the entire stud is.

This stud detector also determines the drywall thickness, to better ascertain what’s behind it. The device can detect non-ferrous metal, wood, and AC wires behind drywall. 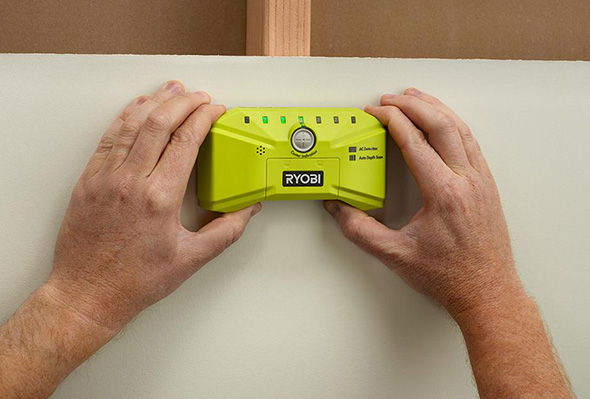 Unlike the Profinder, and like other stud detectors, this unit has to be calibrated every time you turn it on. You press both the button on the bottom and hold it over an area between studs until the LEDs light up in sequence and flash. The manual specifically says not to hold the stud detector over a stud while calibrating.

Interestingly, this stud finder uses only a single AA battery, which is installed under the battery cover on the front of the device.

Ryobi’s EFS 5000 whole stud detector is available online and in some stores. If you order online, spend $45+ to get free shipping, or you can also opt for in-store pickup.

Why Ryobi designed it to work like this, requiring “two hands on the wheel at all times,” is confusing. Why not just one button activation? I can see no advantage and a number of disadvantages.

I also can’t tell if this device can detect multiple studs in different locations like the Profinder 5000 can. I suspect it can’t, otherwise they would have touted it.

The engineer in me is excited to see they are using only a single AA battery. This tells me two things: this is a low drain device, and they actually spent a few cents extra to implement a boost converter rather than forcing you to buy expensive 9V batteries.