ToolGuyd > Power Tools > Cordless > Ryobi Tek4 5pc Combo Kit With Screwdriver & Snips
If you buy something through our links, ToolGuyd might earn an affiliate commission. 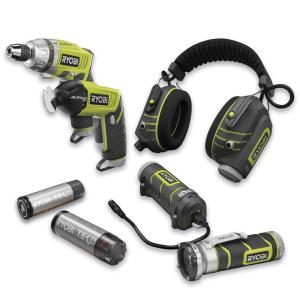 When I first wrote about Ryobi’s Tek4 4V Li-ion tools and accessories a few months ago, I had considered the Tek4 system in a neutral if not somewhat positive light. Still, at the time it had seemed unlikely that the Tek4 system would enjoy widespread popularity.

Well, this 5pc set could very well be what Ryobi needs to springboard the Tek4 system to mainstream popularity. This set is well configured, the tools are feautureful, and it’s priced at a real bargain.

The new screwdriver and snips included in this combo kit deserve much more attention than we could afford today, and so they will be discussed in much more detail later in the week, so don’t forget to check back.

This 5pc combo will set you back a very reasonable $99 at The Home Depot.