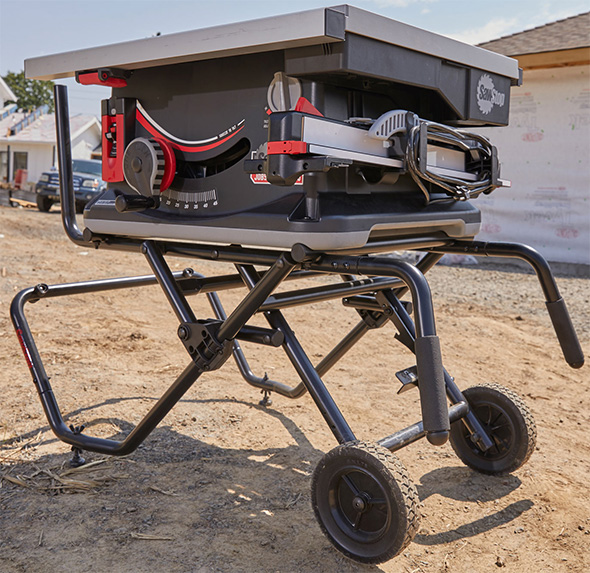 SawStop, now owned by Festool’s parent company, has launched a new portable table saw, model JSS-120A60. The new SawStop Jobsite Saw Pro has popped up on some retailers’ websites and is described as featuring several improvements.

To summarize the changes, at least those that are obvious to us, the new SawStop Jobsite Saw Pro has a 2″ deeper tabletop, an updated fence, and an improved guard with dust collection port. 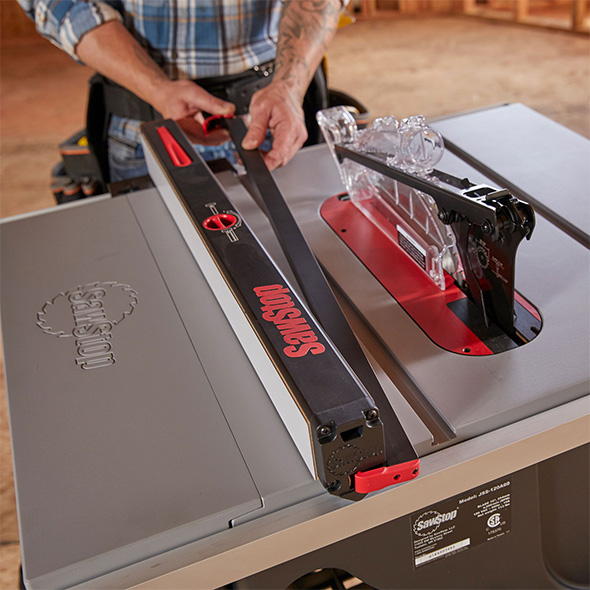 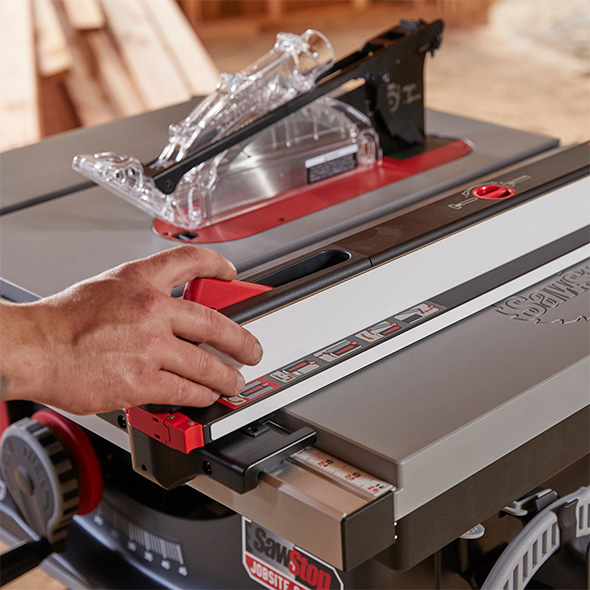 While there was an optional replacement guard for the “legacy” SawStop Jobsite Saw with built-in dust collection, it was a separate accessory purchase and also quite large. SawStop is equipping the new Jobsite Saw Pro with a dust collection blade guard, and one with a more compact design.

Other standard features are also included, such as a riving knife and anti-kickback pawls.

SawStop kept a lot of features from their previous Jobsite Table Saw, including the unique blade elevation system that allows users to raise or lower the blade in just one turn of the handwheel. They also kept the built-in storage drawer that is uncovered when you extend the table top surface.

Aside from the slightly deeper tabletop, most of the new table saw’s specifications seem to match those of the previous model.

SawStop no longer lists the previous JSS model on their website, only the new SS-120A60. On social media, they are saying that the legacy model will NOT be dropping in price, and will remain at its current price point $100 lower than the new model.

I have used SawStop’s Jobsite table saw before, and it’s a well-polished machine. It wasn’t perfect, but they got a lot of things right.

The new SawStop is two inches deeper, which should provide a little extra workpiece support. One thing to realize, however, is that the JSS is a substantially-sized portable table saw. Even compared to other jobsite table saws with rolling stands, such as the Dewalt DWE7491RS, the SawStop has a larger footprint. An extra two inches will likely provide some support benefits, but I’d guess it’s not likely to be “felt” by users, at least not in a bad way.

SawStop seems to have added a beefy low profile work support, for use with smaller workpieces. Beyond that, the fence looks very similar to the one on the “legacy” JSS table saw. The fence on the SawStop Jobsite table saw is very polarizing, since it’s secured at the front but not at the rear, where it rolls along a flat surface that cannot quite be described as a track. Push hard at the rear, and it’ll deflect. However, where you’re most likely to apply pressure against the fence, mainly in front of the saw blade, the fence is quite secure.

Given that the new SawStop Jobsite Saw Pro has a deeper tabletop, users probably won’t be able to upgrade the fence of their legacy model JSS.

One change that stood out to me right away is the new dust collection guard. There’s an optional dust collection accessory that works with the legacy model Jobsite Saw, but it doesn’t stow away in the built-in storage compartment.

Frankly, I’m not sure what they mean by calling the new guard an “active” dust collection guard. Connecting a shop vacuum or dust collector to portable table saws can be problematic. Most vacs will usually do a good job of collecting above-table sawdust through an equipped guard’s dust port, or most of the dust from the lower/rear dust chute. Connect a Y-adapter, and it’ll do a mediocre job of collecting dust from both ports since the suction power is reduced too much.

A built-in fan might help with dust collection. But blade turbulence? Well, at least the new dust collection guard is smaller and presumably compact enough to fit inside the storage compartment.

SawStop’s new Jobsite Saw Pro also features their well-regarded active injury mitigation safety mechanism. The flesh-detection sensor can be bypassed if needed. If you should activate the built-in blade brake, you’ll need a new cartridge and saw blade to reset the machine and get it working again. But, having to buy a new brake cartridge and 10″ saw blade is better than the alternative. Table saw injuries often lead to irreversible bodily harm. SawStop also has a “report a save” program where users might be eligible for a free replacement cartridge.

The price of the original JSS was steep, and this new model is even higher. $1399 plus shipping? $1500 is a lot for a jobsite saw.

What happened to the $400 saw that SawStop was rumored to be working on? In an interview, SawStop’s Steven Gass said that they were “about to come out with a $400 saw with his injury prevention system.” That was two years ago.

One thing I can say about the legacy JSS is that there’s no other saw like it, or at least there wasn’t until the JSS Pro.

If you’re looking for a portable jobsite-style table saw that offers flesh detection and active injury-mitigation technology, the SawStop JSS-series saws are the only players in the market. Bosch did introduce the Reaxx, but they lost a patent infringement suit and had to take it off the market.

I would guess that the legacy model will continue to be available until it sells out, after which the JSS Pro will likely be the only option. A deeper table, added fence features, and dust collection guard? At least you’re getting some good-sounding upgrades for the extra $100.

It’s unfortunate that users have to “sell an organ” to buy a table saw that might save their fingers or hand.