ToolGuyd > DIY & Home > Schlage Keypad Door Lock for Securing the Basement Door?
If you buy something through our links, ToolGuyd might earn an affiliate commission. 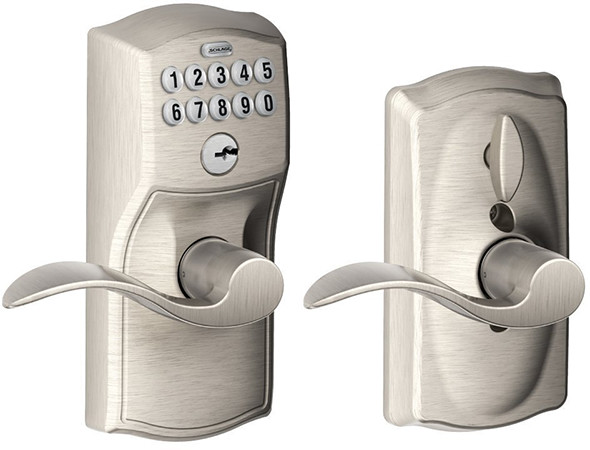 I replaced the knobs to the basement door last night with a privacy lock set. Previously, it had non-locking lever knobs, which my toddler son can easily open. I also bought a hook for the top of the door, but I think there’s a good chance my son can yank it out somehow.

I don’t quite like the idea of having to use the Kwikset emergency screwdriver key to open the door every time I want to go to the basement. So I thought about maybe a keyed Schlage lock, since I like how their keyed locks unlock when you open a door.

Or maybe a pushbutton-style privacy lock, with its simpler “push the stiff pin” outside override?

I need to replace the door soon anyways, since there’s a sizable gap between door and door frame, leaving maybe just 1/32″ engagement between latch and strike. Even with the knob locked, a slight wiggle can allow the door to open. But that’s another project. Even with a new, properly sized door, I’m going to need a good locking method.

But then I came across Schlage’s keypad locks.

I was talking to the locksmith the other day, when he was installing new hardware to the front and back doors, and he said something I’ve heard before, that electronic locks are not quite at their best yet. He didn’t recommend them for exterior door use.

But how about for interior use? I could install something like the above Schlage keypad lock to the basement door, and I wouldn’t have to worry about needing a key or emergency unlock doohickey.

Aside from costing 3-5X as much as a regular internal knob set, and the larger size, are there any downsides?

Schlage offers 2 versions, one which that automatically relocks itself 5 seconds after being opened, and a Flex-Lock style that can be switched between auto lock and unlocked modes. There are a few handle styles and color finishes.

I think the Flex-Lock might be best for my needs.

A keypad lock isn’t something I would have considered before, and I don’t recall what triggered the idea now, but it seems like the perfect way to secure the basement door from my gorilla-strengthed toddler, and without the inconvenience of having to keep track of regular keys or emergency override keys. We’ll still need to keep a key in the kitchen junk drawer, but with a keypad lock, basement access should be near effortless.

I might even buy something similar for my office/electronics workshop/photo room.

If you’ve used something like this before, whether by Schlage or another brand, would you recommend them in general?