ToolGuyd > News > Sears CEO Bashes and Sues TTI, Maker of Milwaukee, Ridgid, and Ryobi Power Tools, over Craftsman Supply Contract Dispute
If you buy something through our links, ToolGuyd might earn an affiliate commission. 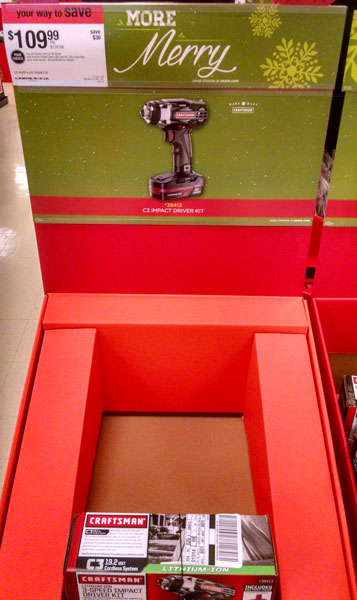 A reader wrote in yesterday (thanks, Devin!), with a link to a story about Sears’ Eddie Lampert’s rant against One World Technologies, a TTI-owned company through which many Craftsman cordless power tools are designed and manufactured.

Here’s his blog post. I’ve read in the past about Sears’ suppliers being nervous about the retailer’s ability to pay for merchandise. This past holiday season, I couldn’t help but notice a lack of brand variety among Sears’ seasonal displays, compared to past years’ selections and compared to Home Depot and Lowes’ offerings, and thought this was a direct result of supplier hesitations.

Sears has had public disagreements with suppliers in the past. A conflict with Loggerhead Tools comes to mind, where Sears developed a similar tool to Loggerhead Tools’ Bionic Wrench after deciding to stop ordering large quantities for seasonal displays.

In his blog post, Sears’ CEO complains that One World is seeking to renegotiate their contract with Sears:

One World…  has threatened to refuse to perform under their Supply Agreement unless we agree to what we believe are unreasonable demands.

One World has informed us of their intention to take the very aggressive step of filing a lawsuit against us as they seek to embarrass us in the media to force us to let them out of their contract.

He complains that One World and several other suppliers want to make better deals for themselves that are unilaterally in their interests.

Um… hasn’t Sears done exactly that to Loggerhead Tools and other suppliers?

What about all those Craftsman Professional tools that were made in the USA? Or the USA-made pliers?

Did Sears and Craftsman not act unilaterally when they did things like that? Apex Tool Group still supplies a lot of tools to Sears and other brands outside their own, but have closed down USA manufacturing facilities and eliminated 2 long-time brands.

Would that Armstrong facility have closed down if Sears had been keeping their Craftsman Pro tool lines alive, instead of switching to imported versions?

What new is coming out of Sears’ Craftsman brand? Their Nextec lineup is still kicking, but there have been no new tools in years and the current lineup has been greatly reduced to a handful of SKUs.

I haven’t seen anything new from the TTI-made Craftsman power tools either.

A few years ago I was told that they were working on several benchtop tool improvements, but nothing ever came from that.

Lampert says that TTI wants to free up their manufacturing resources, to make tools for other brands without having to expand their capacity.

Financial media has talked about suppliers being hesitant about Sears’ ability to pay for new inventory. I think that’s a valid concern.

Should Lampert have openly criticized One World/TTI? Probably not. Later in the day, it was reported that Sears filed a lawsuit against One World.

Sears’ deal with TTI must be huge if a breach of contract lawsuit is a better path for them than mid-contract negotiations.

I’ve tried not to talk about Sears too much recently, because it just upsets me to think about what has happened to them. Their website is unfriendly and at times unusable. Seriously – I wanted to see the final price of something in recent months, and it didn’t let me go to checkout.

Sears’ stores aren’t barren, but they’re just not enjoyable for me to visit anymore. There’s almost nothing I want to buy. It used to be that I would never leave empty-handed.

I get ridiculous emails about “SURPRISE POINTS!!” that are set to expire. Oh, no, my $5 in surprise points off a $25 order are going to “disappear?” Hey Sears, just call it a coupon. The emails are at times quite obnoxious, starting with sensationalist subject lines that annoy me.

In defending the company, Sears’ CEO always points to their Shop Your Way members program. From a March blog post:

We saw the disruption of retail coming more than a decade ago and built a differentiated online shopping and membership platform – Shop Your Way – to ensure our participation in the next wave of retail.

They can tout “Shop Your Way” all day long, the bottom line comes down to this – Sears has become an undesirable place for me to buy tools from, and I’m not alone in this.

Five and a half years ago, a reader asked me about the future of Craftsman’s C3 lineup. I started by saying Craftsman C3 is here to stay. My stance has since changed.

Craftsman’s C3 lineup has a very uncertain future, due to Sears’ uncertain future, and also because we don’t yet know what Stanley Black & Decker has in store for the brand as far as power tools are concerned.

From what I’m told, DIYers tend to buy cordless power tools for the long haul.

And with this new fight between TTI and Sears, things are even more uncertain. One World isn’t Craftsman’s only power tool partner, but they do make quite a few SKUs that it would be difficult to find another supplier for on a moment’s notice.

It might be an ugly fight between One World and Sears. Things aren’t very clear, without knowing what the supply contract says, or why One World wanted to be let out of it. Maybe Sears’ sale of the Craftsman brand to Stanley Black & Decker has something to do with it.

TTI is the parent company of Milwaukee Tool and their several sub-brands, and they also make power tools and certain accessories for Ridgid and Ryobi brands. They’re not a small company with little resources.

It’ll be interesting to see how this plays out.