ToolGuyd > Editorial > Sears & Craftsman Holiday Tool Deals Haul, 2016 Edition
If you buy something through our links, ToolGuyd might earn an affiliate commission. 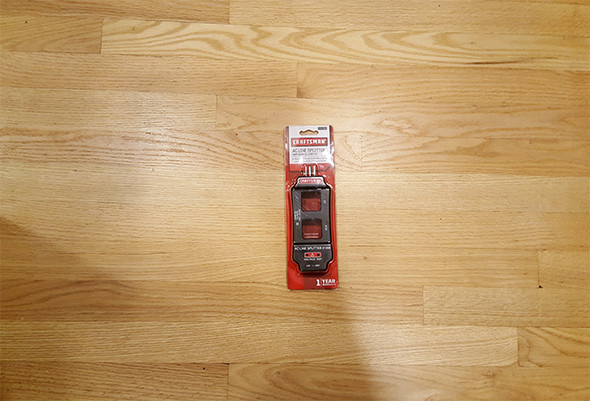 I visited the local Sears for the first since moving to the area nearly a year ago. I think I’ve been to one other Sears in recent months, a few towns over at a mall.

You’ve read about my trip to Home Depot’s 2016 holiday tool deals center, and then my visit to Lowes tool deals center. I spent a total of nearly $600 at both stores, on tools of both personal and review interest.

So how did things go at Sears?

Almost nothing interested me, until I realized that I’d been meaning to pick up Craftsman’s version of Extech’s line splitter. The Extech version is $15.99 via Amazon, Craftsman’s is $10.99.

My visit actually started off horribly.

There was a handicap-accessible door at the entrance I parked at, which was great because I had my toddler son in my arms and infant daughter in her car seat on her stroller.

The handicap-accessible door, which lacked a button and seemed to be one of those “pull and it’ll open automatically for you” types, was LOCKED. It was locked on the way out too.

The regular door was not much trouble, but I found it mildly annoying that someone at Sears would lock the automatic door. If there was a good reason to do so, there should have been a sign. What would have happened if someone really needed that door and couldn’t open it?

Apparently the tool department is on the bottom level of this 2-story store. I found the elevator pretty easily.

The elevator left me off at the start of the tool section. 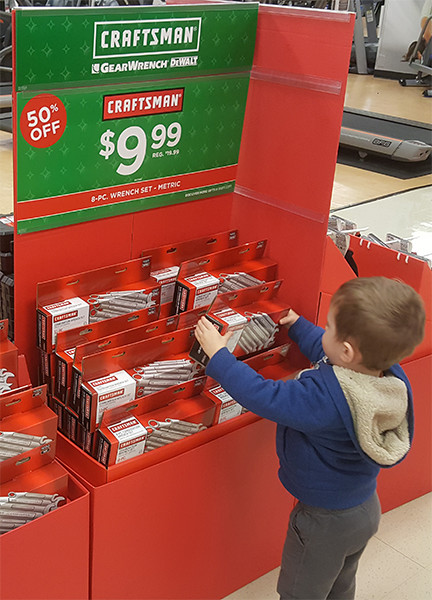 There were some people in the store, but it was empty enough that I let my son explore a few feet from me without worrying about him being in anyone’s way. I absolutely couldn’t do this at Home Depot or Lowes. 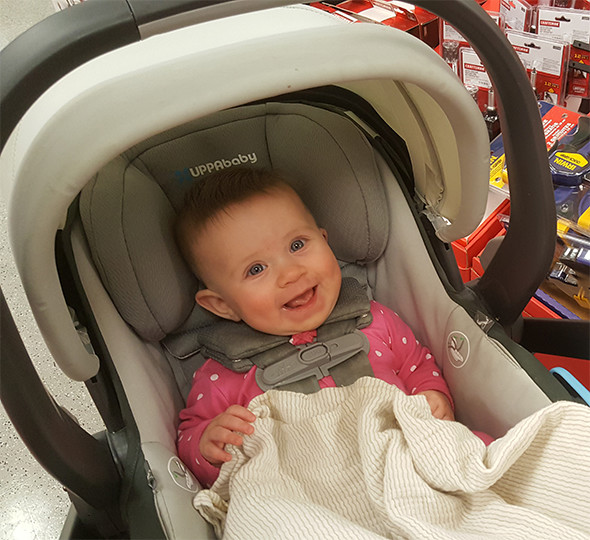 Hey missy, what do you think about shopping for tools?

Overall, there were lots of tools of general interest to those growing their tool collections, but I didn’t really see anything for me.

There were less tools than in the past, less brands too.

I think that everything I saw was from Craftsman, Dewalt, Gearwrench, Gladiator, and Irwin.

Speaking of Gladiator, I saw this Gladiator Premier wall Gearbox in white: 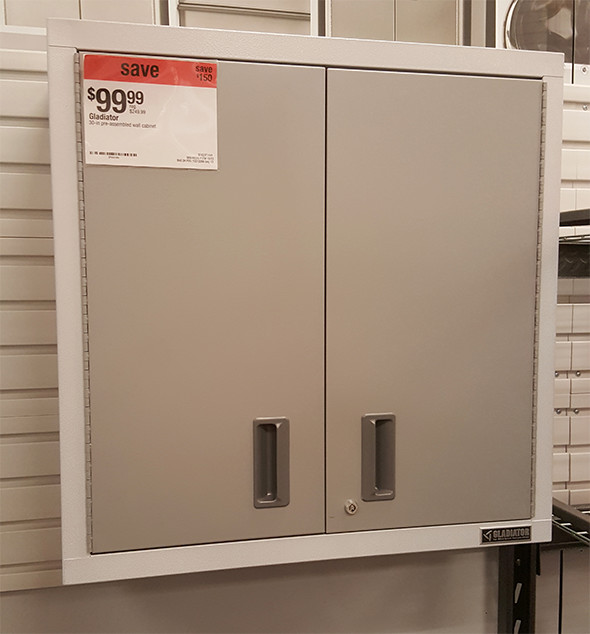 I inquired about how many they had in stock – 0 – and they were showing up at the full price of $250. But the sales associate said she could honor the price for up to 1 week, and it wouldn’t be a problem if I wanted to order multiple units.

These cabinets are double the price at Amazon and everywhere else.

One problem: the order would have to be in-store with in-store pickup. I’m thinking of getting 4. Maybe 1 or 2 for my office, the rest for the garage.

I wasn’t very impressed at first, but couldn’t make up my mind based on a floor sample. It’s the kind of thing I would need to use for a few days or weeks to see if I liked it.

The construction seemed to be solid, but the drawers lacked the soft self-closing feature I’ve been growing used to. They do have very high load capacity though.

The combos were also HUGE. Maybe too tall. I asked an associate if there was a trick to closing the lid without jumping. He kind of lunged up and forward to grab the lid.

The Craftsman Pro box combo is so tall that the top compartment floor was nearly eye-level. How am I supposed to plug anything into the built-in power strip? Retrieve anything from the back? Close the lid?

The sales associate said that all high-end tool storage products were tall like this.

The lid had spring-assisted stays that made closing it a little more difficult.

The top drawer was quite tall too.

It was quite discouraging. I couldn’t effectively use a tool storage tower this tall. 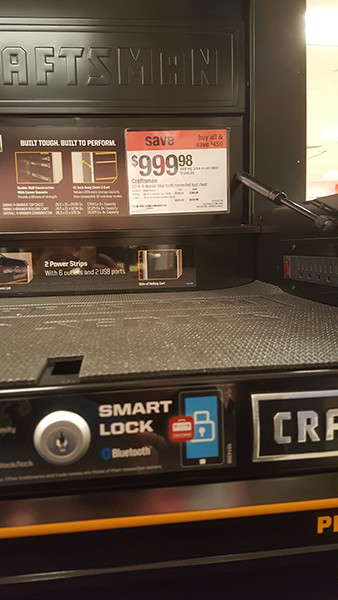 This image was taken to simulate eye level.

Milwaukee’s 30-inch tool storage combo, reviewed here, is quite tall. But not this tall.

To reach the back of the top compartment, I have to arch my arm up and over the front, uncomfortably. 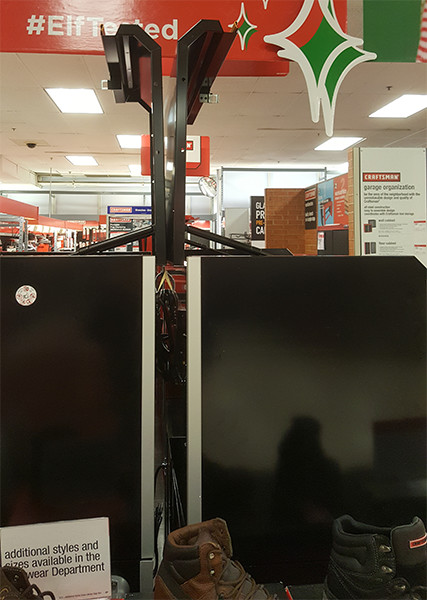 Making things matter worse, the top compartment is very shallow. That’s not bad in itself, but it means the lid is not contoured or angled, which as been the trend. Combined with the very tall height, I just can’t reach the lid easily.

I asked about how the top and bottom attach, since the associate seemed to have been involved in setting them up a few days ago. He told me he didn’t know, but there were bolts in the bottom cabinet. Maybe a drawer in the chest came out and the 2 bolted together?

Both display combos, the 26″ and 41″ units, were askew, with the chests misaligned with the bottom cabinets they were resting on. I didn’t see any brackets on the sides or front, and the rears were inaccessible.

The more I examined the Craftsman Pro tool storage boxes, the more I felt my enthusiasm being sapped away.

On a bright note, the sales associate, who might have been a department manager – I wasn’t sure and he was later too occupied for me to ask – had a lot of enthusiasm for the Craftsman Pro cabinet. I didn’t get the feeling like he was out for the commissionable sale, but that he was truly excited about the new tool boxes.

He also had a good idea, suggesting that maybe the top box should have come with a worklight of some kind.

I also saw the Harley Davidson tool storage combo, and it seemed incredibly thin and flimsy. Was it this bad a few years ago when I first checked it out at a Craftsman holiday tool preview?

Overall, I saw a lot of the same deals I saw last year, with maybe a few new Craftsman tools mixed in. While there were some good deals in there, I felt the overall variety to be lacking compared to the offerings at Home Depot and even Lowes.

If I go back to Sears this holiday season, it’ll be to score a couple of those Gladiator work cabinets.

On the way out, the handicap-accessible door was still locked.