ToolGuyd > CNC Machines > Kickstarter: ShopBot’s New Handibot Portable CNC Machine
If you buy something through our links, ToolGuyd might earn an affiliate commission. 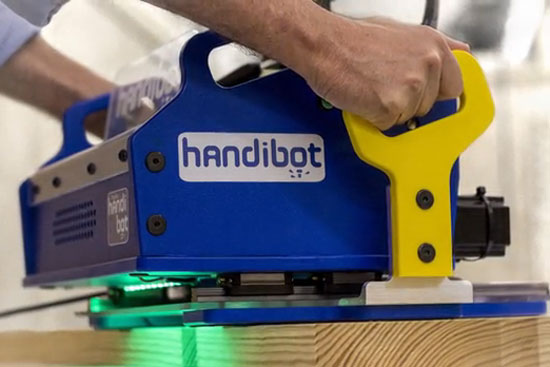 Shopbot’s new Handibot is a portable CNC machine. Similar to the computer-guided router we posted about a few months ago, the Handibot requires a greater level of user interaction than traditional CNC machines, so it actually better described as a smart power tool.

The Handibot can cut, drill, and carve flat sheet materials, but it looks like the application side of things isn’t quite ready. Shopbot is using the Kickstarter funding platform to raise money that will go towards supporting an application and resource environment.

While I normally don’t approve of companies using Kickstarter as a preorder platform, I understand what Shopbot is looking to do. They’re looking for a big boost in initial sales that will give them the revenue and motivation to continue with “app” development.

Early backers will be able to send their own designs to the Handibot, which has a 6″ x 8″ x  4″ XYZ work envelope.

To receive one of the first Handibot machines, you’ll need to pledge at least $2400, plus $75 shipping and tax where applicable.

There’s no dust collection yet. All of the product photos I’ve seen show dust and chips all over the place.

Empowered by apps, but very few apps will be available for the first Handibots.

Windows PC required. Shopbot has plans for future controllers, but only the premium backers will receive the Handibot with a compatible Windows 8 tablet. I really like the idea of using a tablet to control the Handibot, but would rather see the machine come with an integrated controller that can speak to Android or iOS devices.

Despite these concerns, I do find the design to be highly appealing. I presently lack the space for a CNC router, and would love nothing more than to be able to plop a Handibot on top of plywood, plastic, or aluminum sheets and have it do its thing. But there is no way I would want to be an early adopter for this machine.

Shopbot is an established and reputable CNC router manufacturer, and I have no doubt that the Handibot is well designed. But right now, there are no apps, only “some initial ideas,” and there’s no concrete information about what attachments or accessories will be available.

You’re going to hear a lot about the Handibot in coming days and weeks. They’re already a third of the way towards their $125K funding goal, and this is just day 1 of the Kickstarter campaign. The design is novel and definitely has potential, but I can’t quite see it as being revolutionary or game-changing.

In one of the promo videos, you can see a Handibot gliding across a linear rail to create a very long cut-out. The designer goes on to say that with jigs or accessories you can work on longer work envelopes. That’s what I want to see! But until then, I question the versatility of the machine, especially for tradesmen.

Shopbot Handibot being used on a larger workpiece: