ToolGuyd > Uncategorized > Shortcuts: I Wasted an Hour to Save 5 Minutes
If you buy something through our links, ToolGuyd might earn an affiliate commission. 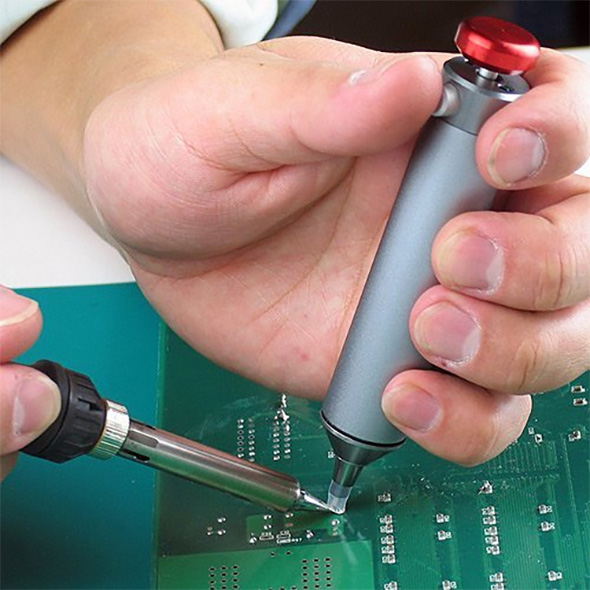 Before we get started, I’d like to give a thumbs up to my tool of the day, the Engineer Inc “Solder Sucker” desoldering pump!

Okay, here’s what happened. A few days ago I got fed up with the “enter” key on my keyboard, as it had been sticking. I must have spilled something on the keyboard at some point, because it was literally sticking a little with each keypress.

This wasn’t the primary enter key, but the one on my number pad, and so it saw consistent but less regular use. Still, it bugged me.

I took the keycap off, which you can easily do on a mechanical keyboard, and tried to clean under it.

I tried cleaning different parts on and around that enter key for the next couple of days.

Today, I removed the keycap and then its stabilizer parts. When you have a large key, such as the “enter” key, spacebar, or shift keys for example, they have an electromachanical switch and stabilizers on either side.

Aha, things were a little gooey at the bottom, and so one of the stabilizers were sticking to the PCB underneath every couple of presses. It wasn’t a big deal, but the slight disturbance struck a nerve and frustrated me.

A little swab with alcohol and everything was clean, right? Yep. Nicely done, I mentally patted myself on the back.

Now, to put it back together…

Uh-oh. Everything released and popped out easily, but I couldn’t get it to pop back together.

I struggled, I searched for YouTube videos, I struggled some more, and finally I gave up.

As soon as I watched the first out of two or three videos, I realized that removing the enter key’s switch, stuck in the middle of where the stabilizers needed to go, would make for easy reassembly.

But I didn’t want to have to desolder the key and the resolder it back together. All that work for a 30 second re-lube and reassembly operation? Surely I could figure out a way to make things work.

So, I spent maybe an hour, hour and a half, trying to find a way for things to clip together, including the initial struggling before I took to YouTube. It only took a moment to take things apart, surely there was a way to put it all back together quickly and easily, and without soldering, right?

In the end, I pushed things out of the way on my bench, plugged in my fume extractor, plugged in my soldering iron, retrieved my solder (which I keep out of reach in case my kids explore the cabinets unsupervised), grabbed my Solder Sucker desoldering pump, and got to work.

I removed solder from two dummy holes (since there’s no LED in these keycaps), removed the two switch keys, and the switch came out fairly easily.

I reassembled the stabilizers, installed them in the keyboard in a matter of seconds, resoldered the switch to the board (I had to do this twice as it wasn’t perfectly flush the first time), put everything back together, and everything seems to be working.

I had some cleanup to do, and the tubing tip of my Solder Sucker required a toothpick to extend its lift. Without those setbacks, everything took a maybe 5 minutes to do.

I was so hesitant about the hassle it would take to set up for and clean up after desoldering and soldering, that I spent more than 10X longer trying to “save time.”

This wasn’t the first time a shortcut backfired, and it won’t be the last.

Well, at least I know for next time time that there’s no way to reassemble keyboard rstabilizers without involving soldering. And hey, *knock on wood* nobody got hurt and I didn’t break anything.

Have you made similar mistakes, with tool-related shortcuts that took longer than the “right path” you ended up having to take anyway? 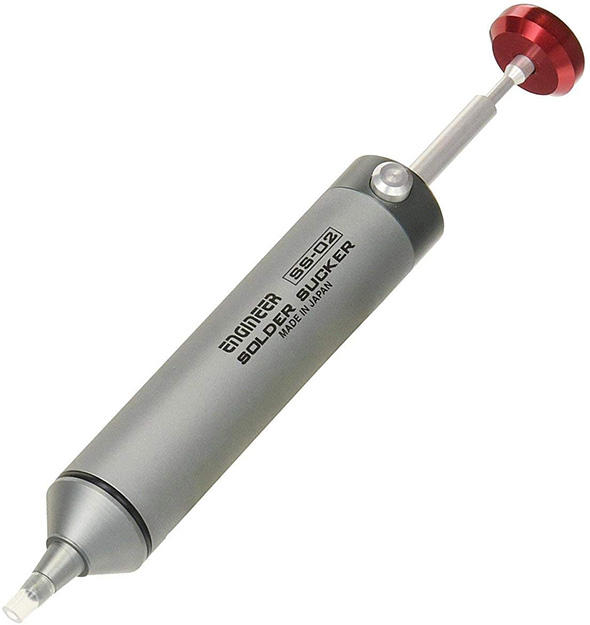 Now, about that Engineer’s Inc Solder Sucker – I’ve got some other desoldering tools in my kit, but this one see the most use. It’s not perfect – it can be an ergonomic mess at times due to its small size, but it gets the job done when it matters. I also think it’s too pricey for beginners though. If you’re just getting started with soldering, buy something cheaper – a basic desoldering pump or desoldering wick.

I bought one of these desoldering pumps from I Heart Engineering (sadly now defunct) back in 2013, and another from Adafruit back in 2014. So far, so good.

Edsyn makes a very good (and very large) desoldering pump for around the same price. If you’re feeling cheap, a bunch of companies offer knock-offs for less. The Edsyn is made in the USA, the knock-offs are not.