ToolGuyd > Power Tools > Cordless > New Skil Cordless Screwdriver with “Circuit Sensor” Tech
If you buy something through our links, ToolGuyd might earn an affiliate commission. 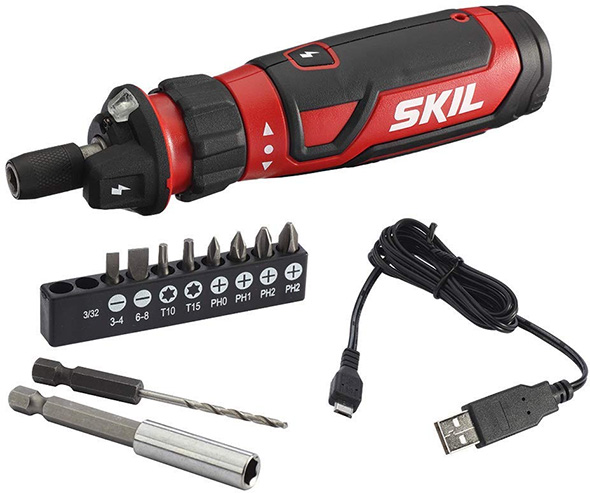 We’ve seen this before, in the Hammerhead cordless screwdriver. It looks like a very similar tool, but with some cosmetic differences, and it might have been further optimized. (Chervon acquired the Skil brand in 2016.)

The new Skil cordless screwdriver has a built-in 4V Max Li-ion battery, and recharges via micro USB cable. It comes with a USB cable, but no charger, which Skil probably assumes most people already have at home these days.

Its 1/4″ hex bit holder is depicted accommodating standard 1″ bits, and dual LED lights ensure that you’re never working in the dark. The fingertip direction dial allows for forward and reverse rotation, and a spindle lock at the center allows for manual use.

There’s no mention of torque rating, but it has the same 230 RPM motor speed as the Hammerhead screwdriver.

Lastly, there’s the built-in non-contact voltage detector, which gives visual and audible signals when a live AC current is detected.

When Chervon came out with the Hammerhead cordless Circuit Sensor screwdriver, my local Lowes stores didn’t seem to move many. The concept seemed sound, and the tool itself was good. But the Hammerhead brand was new and unfamiliar. I’m thinking that they’ll have much better luck with this new Skil version.

My biggest question is whether the price will remain steady at $25, or whether it will dip down to $20 when the holiday season is in full swing.

One potential plus is that the Hammerhead screwdriver has been out for a while, and so I would expect for the Skil driver to be well seasoned and perfected.