ToolGuyd > Power Tools > Saws > Skil Sawsquatch is a Beastly 10-1/4″ Worm Drive Circular Saw
If you buy something through our links, ToolGuyd might earn an affiliate commission. 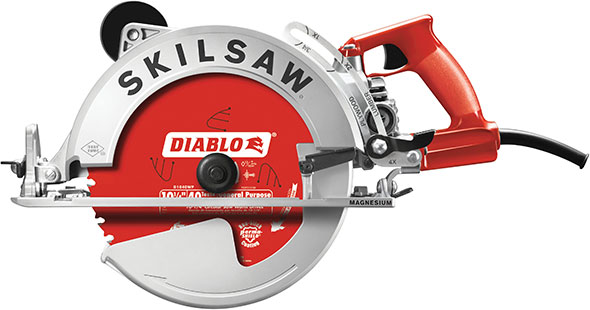 The new Skil Sawsquatch Skilsaw (model SPT70WM-22) is exactly what it sounds like – a beastly worm drive circular saw. The Sawsquatch is built around a monstrous 10-1/4″ blade size, which gives it huge cutting capacity. It can even cut through 4x lumber with just a single pass, and Skil says it’ll do it smoothly and cleanly too.

The Sawsquatch is among one of the first Skilsaw saws to sport their new brand identity, as they try to distance themselves from less professional Skil offerings.

Skil’s circular saw product manager says that the Sawsquatch’s 10-1/4″ blade size will help users get things done quicker and with fewer and faster cuts. The saw is well suited for applications such as framing, cutting fence posts and deck beams, and even general purpose ripping and crosscutting tasks.

It’s got a “DualField” motor, which Skil says has a unique copper winding pattern to help keep the motor cooler. This should help increase the saw’s long-term durability.

You also get magnesium components – upper and lower guards, and the foot – to save on weight and reduce user fatigue. Any weight savings will be much appreciated on any worm drive saw, let alone one of this size. The motor housing is made of aluminum.

We asked Skil if the new saw can fit 10″ saw blades – which would be awesome – but it doesn’t. It only works with 10-1/4″ saw blades that have a diamond arbor hole.

Don’t try to attach a regular 10″ blade with 5/8″ arbor either – Skil says “it will not locate correctly on the inner washer or the shaft in both radial the radial and axial directions,” resulting in significant misalignment that will create additional stress on the motor. You would see reduced motor life, the tool would vibrate, cuts won’t be clean, and there would also presumably be a safety hazard. Additionally, a 10″ saw blade wouldn’t allow for clean one-pass cuts of 4x wood materials.

In other words, make sure to only use 10-1/4″ blades with diamond arbors. A replacement 40T Diablo blade is ~$32 via Amazon.

I haven’t used a worm drive saw of this size yet, but the benefits are obvious. If you want to cut through 4x material in a single pass, this is the saw to do it. It probably plows through sheet goods and 2x lumber as well.

But if cutting through 4x wood cleanly and smoothly in a single pass doesn’t matter to you, then the nearly 16.5 weight and $449 price tag will probably convince you to look at smaller saws. Additionally, while there are a couple of brands and styles of 10-1/4″ saw blades, you don’t get anywhere near the selection and availability of 7-1/4″ or even 6-1/2″ circular saw blades.

The Sawsquatch is a big saw for making big cuts.