ToolGuyd > Power Tools > Saws > Skilsaw “Buzzkill” Reciprocating Saw
If you buy something through our links, ToolGuyd might earn an affiliate commission.

Skilsaw sent me a rather cryptic email in mid-August, directing me to a teaser video and newsletter sign-up page for a new tool they were coming out with.

10 days later, they announced the new tool, their new Skilsaw Buzzkill reciprocating saw, which they claim provides “up to 35%” more vibration suppression over competing models.

A corded recip saw that promises lower vibration? Sounds good to me, although I haven’t been won over just yet.

The new Skilsaw Buzzkill, SPT44A-00, is Skilsaw’s debut into the linear cutting market, although it should be noted that there are plenty of Skil-branded entry-level and consumer models available.

If your recall, Skil and Skilsaw were acquired by Chervon, from Bosch. Before that, Skilsaw sought to relaunch their brand identity separate from Skil, presumably to hone their “for pros” image, separate from Skil’s more entry-level and consumer-focused reputation.

Some of Skilsaw’s forays into new markets, such as with their worm drive table saw, bear strong resemblances to Bosch tools. With this being a new release post-Bosch ownership, I wonder if it’s an entirely independently-designed product from under Chervon.

Skilsaw’s marketing video and imagery excludes any competing Bosch saw. Does that mean Bosch’s saws are better, or are they excluding Bosch’s saws as a courtesy, perhaps because they had a hand in the design?

Chervon is not a household name, but you have probably seen their tools before. They manufacture for many tool brands, including Craftsman and Kobalt. They also launched the EGO cordless outdoor power tool line in recent years, as well as Hammerhead, which doesn’t seem to have reached the same level of success. 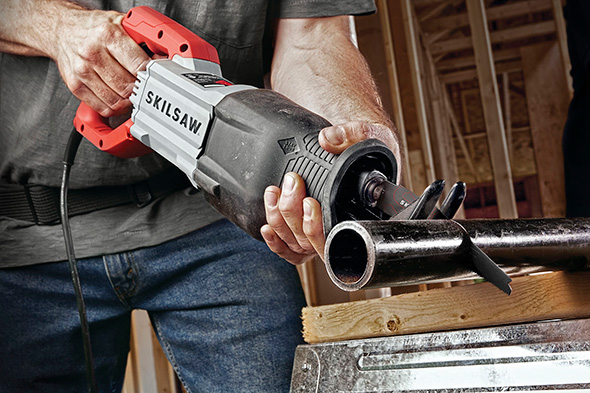 A single wobble drivetrain? How many “wobbles” are in other saw’s drivetrains? The linear system is said to “simplify the counterbalance” for fewer wear points and greater durability. How?

A clock spring, as I understand it, works similarly to the coil return springs in drill presses and tape measures. I can’t visualize how that’s being used to press the carbon brushes to the motor, but Skilsaw claims benefits of durability and optimial motor performance.

The 13A model features:

I’m still waiting on the length, but it looks around the same size as other 13A reciprocating saws.

There will also be a 15A model priced at $179 that will also feature an orbital mode switch.

The demonstration seems to strive for a “wow, look at that!” reaction, but I only find myself with even more questions.

First, which models is the Skilsaw being compared to? For example, why is their 13A saw being compared to Dewalt’s 12A reciprocating saw, instead of their 13A saw? Is this because Dewalt’s 13A saw bests Skilsaw’s? I should also point out that, as of the time of this posting, the Dewalt 12A saw in Skilsaw’s marketing video can be found for $89 at Amazon, which is $11 less than the $100 the Skilsaw is selling for at Acme Tool.

Okay, so the “vibration suppression” claims – is that for a tool dangling from strings, or in use? Is that “up to 35%” advantage diminished when a blade is brought into contact with a work material?

I can understand why Skilsaw is comparing their 13A saw against other brands’ entry saws, but what about their premium 15-amp saws? Serious users are more likely to reach for a more powerful saw, correct?

As of the time of this posting, we know that there will also be a 15A Skilsaw Buzzkill saw, SPT44-10, but there are no claims about how it will compare with other brands’ vibration suppression or dampening capabilities.

I can’t help but feel skeptical. While I’ve seen good performance from Skilsaw tools, that was when they were owned by Bosch. And I have also seen some very mediocre tools from Skil.

I have never been much impressed with Chervon’s consumer-focused cordless reciprocating saws. They were adequate, but clearly not anywhere near professional saws in terms of features or quality. But that was also a few years ago. The new Kobalt 24V Max brushless tools, on the other hand – the line as a whole has been impressive.

I guess the advantage is something that has to be felt, at least against the worst or least vibration-suppressing competing model.

I want to see numbers that quantify the vibration levels that are transmitted to the user’s hands and arms, but that’s something that one often has to look at European product listings for. Sometimes it’s buried in a user manual.

Skilsaw is very experienced with circular saws and related tools. They have some experience with reciprocating saws, in the form of Skil and Chervon-made products.

I’m optimistic, or at least I’m trying to be. It’s always dampening when I see more hype than substance with new tool launches. Don’t tell me how good something is, with esoteric feature descriptions and unfair apples-to-oranges demonstrations. Show me live measurements of vibration sensors attached to tools that are actively cutting wood, metal, or other common construction material.

I’ve become somewhat jaded from all the super-hyped tool launches. I want to see more from Skilsaw, especially a foray into professional cordless tools. Chervon’s EGO brand has done a good job on delivering what their hype promises. I’m really hoping that Skilsaw can do the same.

Most other brands seem to have all but given up on coming out with new professional-grade corded power tools. I’m happy to see Skilsaw taking advantage of this and pushing forward with what I hope are real user-benefits.

With new high-performing cordless framing saws entering the market, Skilsaw might see lower demand for their very well-regarded worm drive saws. With that, and Skilsaw’s reputation (at least apart from Skil), I want to trust in this new reciprocating saw more than their launch has given me reason to.

Thoughts? How interested are you in the new Skilsaw Buzzkill 13-amp reciprocating saw?