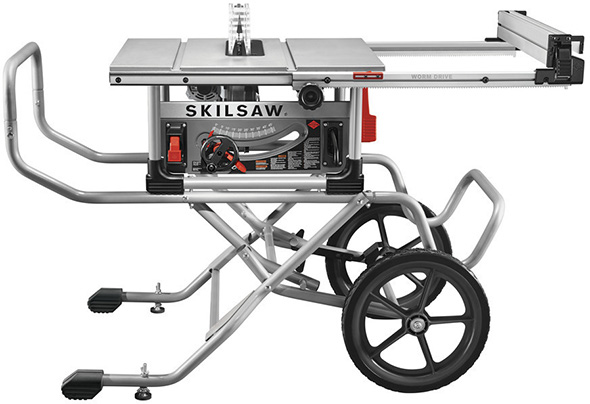 Their first portable worm drive table saw first came out 2 years ago, and has earned itself a solid reputation. It’s a decent saw, and often sold at a compelling price point. There have been some decent deals, and I’ve been on the lookout to see if there will be mentionable deals this holiday season.

The new Skilsaw worm drive table saw is said to have an increased 3-5/8″ depth of cut and 30-1/2″ rip capacity. There’s also said to be a new precision rack and pinion fence system.

Dust management is facilitated with a unique dust elbow, which can be connected to a vacuum or used to direct sawdust into a bucket or other container.

There are two versions – SPT99-11 comes with a Skilsaw blade, SPT99-12 is packaged with a Diablo blade.

But wait, there’s more. You guys asked me to be on the lookout for a good deal, right? We asked Skilsaw, and they didn’t have much to share. But I just checked Acme Tool, and they have a freebie offer running now.

You could wait and see what discount offer Cyber Monday brings, or opt for a free circular saw that’s valued at $100.

It’s good to see Skilsaw continuing on their path to try new things. This new saw has big cutting capacity, both in terms of rip capacity and cutting depth, and just look at those wagon wheels on the rolling cart. Have you ever struggled to roll a portable jobsite table saw over rocks, dirt, uneven terrain? Bigger wheels will help.

This isn’t a space-saver saw, it’s a monster designed to compete with its biggest and most popular competition.

I just have one request for Skilsaw. Please, pleeeeease make the next one cordless! We need more competition in the cordless table saw space.