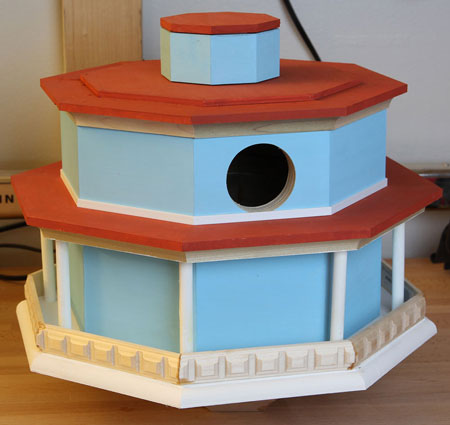 Shown here is a birdhouse I made for a Craftsman blogger event instructor’s competition. I wonder what my design would look like now. It’s completely irrelevant to the discussion.

I was talking with a potential advertiser, and they asked about sponsored posts.

I’ll partner with brands or retailers and agree to certain types of paid opportunities. But sponsored posts is where I draw the line.

“What if you were offered $xyz for a post?”, my wife asked me. I thought about it. Nope.

She’s one of my moral advisors, people whose opinions I trust and are compatible with my own. None of them are quick to say “take the money!”

I suppose that there is a point where I might say yes. If an agreeable brand offered a year’s salary/revenue for a single post? A year’s worth of mortgage payments? The amount of money they pay to get their name on a NASCAR car or the side of a stadium?

Luckily for me, no one is offering me ridiculous amounts of money. Unluckily?

If I ever do agree to a sponsored post, there’s no going back.

Brands and retailers have been increasingly interested in non-banner advertising sponsorships and campaigns. For that reason, and I believe I mentioned this once or twice, I am much more amenable to working on sponsored projects or other types of programs or partnerships that don’t influence or dictate editorial content.

A few years ago, I conducted a testing campaign for Bosch oscillating multi-tool blades, and it was a really good experience. They paid for me to test 3 styles of blades, and I did. I was a bit surprised to see just how superior Bosch carbide blades were compared to others’ comparably priced bimetal blades.

That series didn’t involve sponsored post, and I was able to run everything to my designs. I never would have been able to budget the time or equipment costs if not for the sponsorship/paid component, though.

It was more like a commissioned test program, rather than sponsored. I don’t know if I would do that again, only because it required huge spans of time.

I just don’t like the idea of sponsored posts. That crosses the line for me. Whenever I read sponsored posts or “advertorials,” I can never tell what’s genuine.

By being open to sponsored projects or commissioned testing, I feel that it’s my time and talents (for lack of a better word) that a potential advertiser would be buying, and not my voice or influence.

Thankfully, I always have the freedom to say “no” to opportunities that I’m not open to doing. I have turned down sponsored post opportunities in the past, and will continue to do so.

But if there’s an opportunity for a sponsored project or commissioned testing, it might be in the realm of consideration. We’ll have to see how things go.

Posts and discussions like this are always a little awkward, but I like to show how I think about things.

It can be hard being on my side of things. I might be offered a sponsored opportunity that I turn down, and then see a sprinkling of posts or reviews for that brand or company, some or even many of which don’t mention the sponsorship arrangement.

I was recently talking to a marketing manager, and they assumed that our reviews were financed by tool brands. No way! “But what about that review on [specific tool]?” That was just a review. They’re ALL just reviews.

Other times, I’ll be asked what ToolGuyd’s review fees are. Review fees?

We tried to go to STAFDA this year. STAFDA has draconian rules about only recognizing print magazines as media entities. And it costs a ton of money for flight and hotel accommodations. One brand that was willing to sponsor us in the past, in exchange for banner ads, only wanted us to “build excitement.” The person I used to talk to had recently left. I told the new contact what we were willing to do, and they told me that other media entities they were sponsoring had offered X-number of excitement-building posts. Ultimately we couldn’t come to an arrangement.

Two other brands were willing to help us with passes, but ultimately we decided against going.

There are a couple of brands that sponsor attendance to shows like STAFDA and World of Concrete. I must admit, it bugs me when I don’t see disclosures accompanying emphasized attention and coverage given to those brands’ products and brands.

I have nothing against sponsored show coverage. But you can bet that if we ever do have any financial arrangements to attend a trade show, we’ll disclose those arrangements in a post.

It seems to be the norm now for reviewers and Instagrammers to accept money to be somewhere, or to provide show coverage for a brand, and to not disclose it.

Why can’t they just add a simple disclosure, such as:

That’s what we’d be willing to do for brands that sponsored our visit to a show or event, or if we shopped around to several brands to pay for our attendance somewhere.

As you can tell, this is a big internal topic for me. What will we accept money for? What won’t we? What is right for us and our readers, and what is a wrong fit?

I don’t enter any paid arrangement lightly. I always think about whether something is a good fit for me, for ToolGuyd, and for you, our readers. If in doubt, I ask, whether in a feedback post or an outside opinion.

Sponsored posts? Still off the table.