If you’re a longtime reader, you probably know by now that I like to share behind-the-scenes updates and info every now and then. I like for as many things to be transparent as possible. Sometimes I ask for feedback, other times I provide general site info, such as with end-of-year updates.

You might find all this boring, or it might be interesting. In case you find it uninteresting, don’t say I didn’t warn you!

Back in February I was planning for site-wide changes, and asked for your feedback. Then, in March, Google sent over an email suggesting that I fix ToolGuyd’s mobile usability issues. I had been wanting to step into the responsive arena for a while, and Google gave me the swift kick I needed.

Google is responsible for a huge proportion of visitors that find ToolGuyd via search. If Google says fix something or potentially experience negative ranking consequences, you fix it.

And so, right after I told you that massive changes are coming, I went ahead and very quickly changed things over to a new layout I had been working on. I barely slept that first week, but I was able to get most things looking and feeling kind of like they used to, and hopefully you feel there are improvements as well.

In a nutshell, a responsive layout is one that adjusts depending on the size of the browser window. So instead of readers having to double tap or pinch the screen in order to zoom in on a content column to make it large enough to read, a responsive site will push the sidebar to the bottom of the page and resize everything to fit the smartphone or tablet browser window.

I’m not done yet with the site updates, as there are still a lot of things that need work or polishing.

Minor Update: Starting today you’ll notice that the top navigation menu sticks to the top of the screen, as it did before the change. With some magic I set it so that this doesn’t happen for any device where there’s a “hamburger” 3-lined menu. It should only sticky to the top of a screen when you see the full text menu.

While I’m on the subject, if you read ToolGuyd with a smartphone or tablet, would you prefer for a stacked text menu at the top of the page, or the condensed menu as it is now? Once I have things tweaked I might create a menu bar with an anchored menu button and search box.

“Mobile Usability” According to Google

So what did all that accomplish? 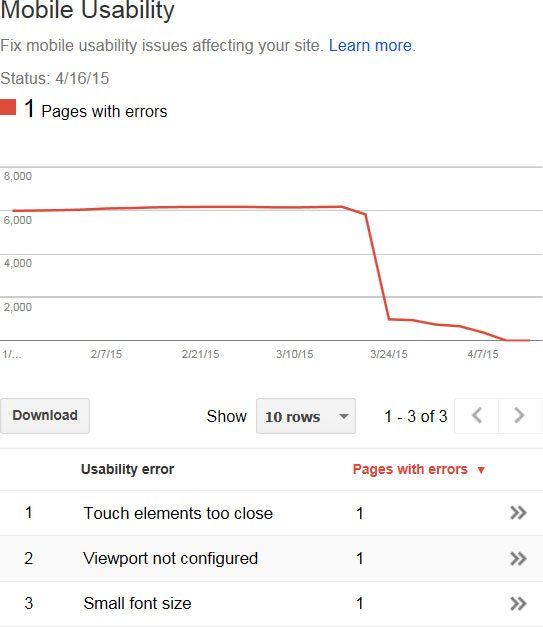 According to Google, I squashed all of the mobile usability issues. That last 1 page that has errors will go away once Google revisits it in coming weeks.

I wanted to wait until everything was in a more finished state before asking for feedback, but if you have suggestions, criticisms, or feedback about the new look and layout, please share! I cannot fix issues I don’t know about, and I cannot implement changes that nobody asks for.

In Case You Hate the New Mobile Layout

One thing I still want to do is create a “switch to desktop theme” button. Or maybe I need to fork the layout styling file into desktop and mobile versions. I’m not sure which will be easier.

Does ToolGuyd load speedily for you? Spambots were really hammering the server to the point where the CPU was overtaxed and site speeds were affected, and this was happening every day or at least a few times each week. I finally tried out a 3rd party service that helps to block spambots, and I think it’s been helping.

The next thing I can do is upgrade the server or hosting package, as I’ve been doing every so often. But now, since the CPU is looking to be the bottleneck, the jump to a higher server package is a bit steeper. Stepping up from here will result in 4X the cost, and that’s monthly!

If need be, I will gladly budget for a higher server package, but with a 3rd party service now knocking spambots off the site, it might not be necessary, at least not yet.

Unfortunately, 4X the cost won’t mean 4X the performance or speed, but I’m told that ToolGuyd would be able to handle a greater number of simultaneous connections. I’ll look into a couple of things.

Oops, What Happened to the Ads?!

Right after I made the site “responsive” in mid March, I noticed a drop in Google Adsense revenue. Well, it wasn’t so much a drop as it was a hemorrhage to the tune of ~40%.

ToolGuyd is supported through multiple revenue streams, but while Adsense isn’t the only source of funding support, a 40% drop hurts pretty bad.

Why is this important? Do you remember the giveaway from April 1st? I spent $555 on that so far, and after shipping the last few things the total will probably be around $600. I also hope to order up some ToolGuyd-branded swag later this year. There will hopefully be stickers at the least, since this is what most people ask for when they write in looking for swag.

A 40% hit to Adsense shouldn’t impact ToolGuyd day-to-day operations, but it’ll affect my ability to do things like spend $600 on a random reader give-back giveaway. I enjoy being able to offer ToolGuyd-funded rewards, perks, and prizes to readers, and so I’d find a way to make it work. But things like budgeting for swag? That’s been cut from funding in past years, and I was hoping that I wouldn’t have to do the same this year.

You see the problem, right? Dark blue is current revenue, light blue is past.

A big problem was that I really don’t understand why this happened. It really makes no sense to me, and it took me a month to figure out what to do. In tablet and smartphone browsers, the sidebar is all the way on the bottom where a lot of readers won’t scroll down to. So it makes sense that Adsense revenue would drop for readers visiting the new responsive site with mobile devices. But there was also an inexplicable hit with desktop browsers as well.

On April 15th, a marketing rep for some big ad service company contacted me for the 3rd time. He was trying to convince me to try out a couple of new ad units they provide – one that flies into the page from the bottom left “gutter,” one that slides up for the bottom, and a mobile ad that stays stickied on the bottom of the page. I ultimately declined, but it was that 3rd email that prompted me to really figure all this out.

On the 16th, I changed a few things. I really had no idea what to do, but I had to try something. I moved the ToolGuyd “subscribe to our newsletter” box in the sidebar, from its position between the 1st and 2nd ad slots, to below the 2nd ad slot. I also modified the little ad that’s right below post headlines. I initially redesigned it to be responsive – 468 x 60px for desktop and tablet browsers, 320 x 50px for smartphone browsers. I tweaked this ad unit to also allow for 320 x 100px ad sizes, although I haven’t really seen ads of that size load in any of my continued tests.

Well, something must have worked, and I’m not sure why, but things improved.

Comparing Adsense revenue on April 17th vs. Feb 20th, you can see that there’s an improvement. The bottom line isn’t where it was, but it’s at least coming close.

None of what I did should have had such effect on the Adsense performance.

Please don’t read too much into why I’m telling you all this. I found it interesting that the drop in Adsense revenue tied into the responsive changes, but it also ties into what I am about to tell you about a new ad unit that I have been testing out in mobile browsers. Nothing is needed on anyone’s parts. Remember, this is just me trying to be transparent.

A New Ad – Please Tell Me If It’s Annoying!

I did a bit of testing on my phone, and saw that the under-headline ad unit wasn’t really loading with the page. By the time it loaded, I was a few paragraphs into an article. And since the sidebar is pushed way, way down on the page in mobile browsers, mobile phone ad performance has become pretty bad.

I am not a fan of in-content ads. That’s why the under-post-headline ad is very small. A larger ad would perform better, as Google reminds me every few months in “performance tips” emails. They keep recommending a large 336 x 280px ad right at the top center of every, page, but I think that would be annoying. And if I think it’s annoying, I am sure you guys will think it’s annoying. Maybe not, but that’s the way I try to do things.

After testing things out a little, a larger banner ad right below post headlines is still as obnoxious as in desktop browsers. But I found that, if it’s pushed down the page a little, a mobile-only content column ad doesn’t really stick out in an obnoxious or in-your-face way, and so I decided to give it a try. The ad is set under the 2nd paragraph in the content column, and you’ll only see it on a phone or other browser that’s very narrow or very short. At first it didn’t look like an ad, and so I added top and bottom borders and a very clear “Advertisement” label. I’ll let it run for a couple of weeks, and am open to feedback.

What I might do is keep one of the content column ads, or both, depending on what I see.

If you visit ToolGuyd with your smartphone, do you find this new ad placement to be intrusive? If so, I’ll nix it.

I disabled the URL/website field in comments a couple of weeks ago, and nobody brought it up. Should I take it that this was a feature nobody misses or feels strongly about?

You probably don’t know what I’m talking about, do you? When you write out a comment (and you do comment from time to time, right?), the site asks for your name and email address. Up until a few weeks ago, it also asked for your URL or website address, if you had one.

9/10 URLs entered into that field were spam. Of the 1/10 that weren’t spam links, most weren’t valid URLs. They were N/A, or “none,” or toolguyd, or ToolGuy, or GJ, or things like that. The site automatically turns these into clickable links, and so those non-link links get messy. The few non-spam and non-link URL entries were to readers’ blogs, sites, or profiles. I did a link audit, and most of the broken links were to commenter’s now-defunct webpages! Others were abandoned and bought up by spam sites!

And so with very few readers using the URL comment field properly or at all, and it being a popular vessel for spam, I disabled it from the comment form.

That’s All For Now…

I’m sure there’s an update I forgot to mention, but if anything else comes to mind I’ll save it for next time.

As always, don’t hesitate to share any comments, opinions, or feedback you have!