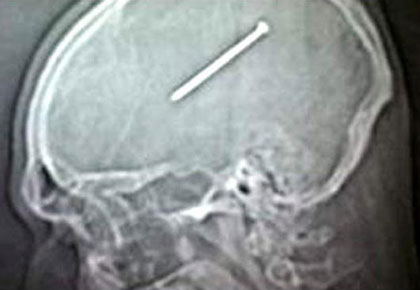 By now you’ve probably already read about how Dante Autullo shot a 3.5″ framing nail into his brain and went more than a day before realizing it. The story of how this happened is a bit unclear. Some reports say that the nailer recoiled after firing a nail. Dante has his finger on the trigger, presumably with the nail gun set to bump-firing mode, and the gun fired when it turned and pressed against his head.

If Dante had been wearing safety goggles, this probably still would have happened. But that doesn’t mean that this was not preventable. What I’m wondering is why his head was so close to the nail gun? Nails can ricochet, and nailers can recoil.

There’s no word as to whether SawStop inventor Steve Gass will now heavily lobby for lawmakers to force nailer manufacturers to license his flesh-detecting technology in their products.