ToolGuyd > Hand Tools > EDC, Pocket, & Multitools > The Wonderful Spyderco Domino EDC Folding Knife
If you buy something through our links, ToolGuyd might earn an affiliate commission. 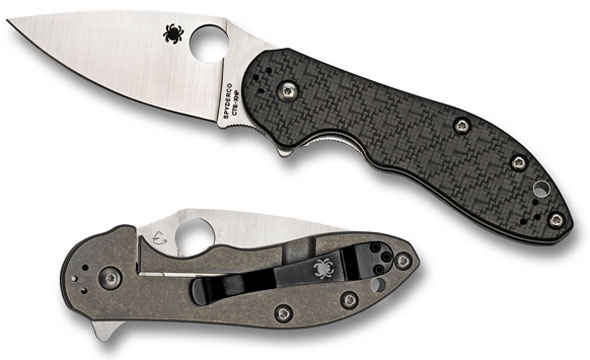 A year and a half ago, the Spyderco Southard flipper folding knife I reviewed was one of my 3 favorite knives. That’s no longer true, not for any fault of the Southard but because I simply like Spyderco’s newer Domino a little better. The Domino (172CFTI) has a different look and feel to it, and its design follows a little more closely to Spyderco’s usual styling.

Like the Southard, the Domino is a flipper folding knife, and it’s built with a very fast and fluid pivot mechanism.

The Spyderco Domino performs well, feels great, and looks good. There’s not much more one could ask for, except for a lower price. Expect to pay $182 to $200 for a Domino of your own.

It’s a great EDC folding knife, and excels at slicing and cutting tasks where you need sharpness and precision. The blade is quite strong, but it’s too thin to pound on, making the Domino better suited for EDC and less suited for very demanding outdoors and wilderness use.

If I had to sum up the Spyderco Domino with one word, I would call it charming. It’s built for sturdy and reliable use, but its looks hooked me in. I wouldn’t quite call it a gentleman’s knife, but the Domino is certainly one of the least intimidating-looking knives I own.

If the Domino is a little too big for your liking, the new Spyderco Dice ($175 via Amazon) might fit the bill. It’s said to be ~15% smaller than the Domino. It’s still pricey, but a great way to spend saved up gift cards and credit card reward points. The one I ordered from Amazon should be arriving any day now.

Yes, the Domino is made in Taiwan, and yes close to $200 seems like a lot to pay for an imported knife. While I would ordinarily have hesitated to spend this much on an imported knife sight unseen, my experience with the Southard has convinced me that Spyderco’s Taiwan-made knives are every bit as good as their USA-made ones in terms of fit, feel, and overall quality. The Domino has a more complex design and is built from more premium materials, and this is reflected in its price.

If you would rather spend big bucks on a USA-made knife, consider the Zero Tolerance 0550 ($160 via Amazon), which is a non-flipping folder, or the excellent Zero Tolerance 0801 Rexford flipper which has (temporarily?) dropped in price to $165 via Amazon. These two knives, along with the Domino, make up my trio of favorite folding pocket knives.

Also be sure to check out some of our other knife reviews. Want to see a particular model reviewed? Let me know!