ToolGuyd > Storage & Organization > Stanley 25 Compartment Organizers Have Dropped in Quality a Little Bit
If you buy something through our links, ToolGuyd might earn an affiliate commission. 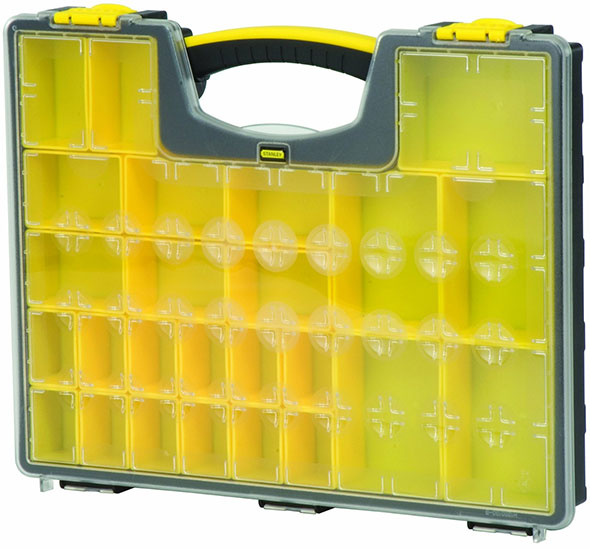 I recently bought more Stanley 25 compartment small parts organizers, and with better-than-before pricing and a holiday discount on Stanley orders, I encouraged you to do the same.

I received my order, and the quality was noticeably lower.

There were some sharp edges. Sure, it was only the little clear plastic vertical support tabs at the bottom of the organizers, but there were sharp edges where my previously purchased organizers have nice rounded edges.

The internal bins also seem to be of lower quality, with rough and even sharp edges. In one of the organizers, the top parts are smushed a little – who knows how that happened. They just seem to be noticeably less refined compared to the Stanley organizer bins I already own and use.

The colors of the little removable bins are slightly different, which isn’t unexpected when you’re talking about molded plastic parts made years apart. They’re less yellow, and a little more orange, looking a little closer like the color Stanley Black & Decker uses for their Dewalt organizer bins.

I don’t know what’s going on here, but I’m disappointed. They organizers still said to be made in Israel, but perhaps the production processes have changed? Something is different.

I don’t exactly regret my purchases, and would still choose these Stanley organizers over Harbor Freight’s cheaper ones. But I’m no longer wholeheartedly fond of this product.

While it seems a little silly to complain about the quality of a $11.75 plastic parts organizer, keep in mind my history with the product. I first wrote about them 6 years ago, and had at that point already been using them for several years.

I first learned of this product something like a decade ago, and searched for them all over the place, looking to add to my initial stack of 2 organizers. This has been one of my favorite tool-related products for many years.

So when I opened the box from Amazon and found that the quality of my beloved Stanley organizers have dropped, I was not happy.

I still recommend them, but wanted you to know that the Stanley organizers you might buy today are not the superbly awesome ones I enthusiastically recommended in the past. These newer ones are still a great bargain for the price, but are otherwise just okay.

Truth be told, if I bought these organizers for the first time, I probably wouldn’t have noticed anything at all. There were a few differences between the organizers I bought in 2014 and the ones I bought earlier, but they didn’t affect product quality, at least not for the worse.