ToolGuyd > Hand Tools > Pliers > Stanley Compound Action Pliers and Cutters
If you buy something through our links, ToolGuyd might earn an affiliate commission. 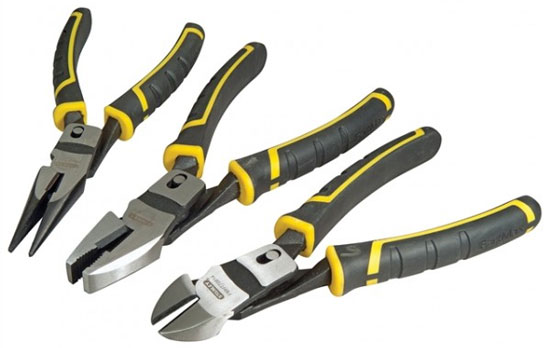 Stanley’s compound action pliers and cutters have been on our radar for about 10 months now. At the time, I crossed my fingers that these would be coming to the USA under Stanley or even Dewalt branding. Now, months later, they’re still only available in Europe. Some dealers, such as at least two 3rd party sellers on Amazon, do import them into the USA, but at higher prices.

Stanley says that the compound action mechanism reduces cutting effort by up to 70%. You also get ergonomic bi-material soft-grip handles, and heat-treated jaws.

Knipex TwinForce and Wiha BiCut cutters work in a slightly different manner. The Knipex has a curved pivot, while the Wiha has a toggleable high leverage mode with hidden internal components.

Overall, European prices are decent, and the pliers and cutters look to be reasonably designed. It’s surprising that Stanley hasn’t released any of these tools in the USA thus far. Maybe the market is already a little too saturated with plenty of compound leverage and compound action pliers and cutters, or maybe they are planning for an eventual release. It’s hard to tell.

If you spot these pliers, or even better – try them out, please let us know!

In the meantime, here’s a promo video about tools most of you cannot easily buy anywhere. Makes you want them even more, doesn’t it, or is that just me?