ToolGuyd > Hand Tools > EDC, Pocket, & Multitools > Stanley Updated Their FatMax Keychain Tape Measure, but Maybe Not for the Better
If you buy something through our links, ToolGuyd might earn an affiliate commission. 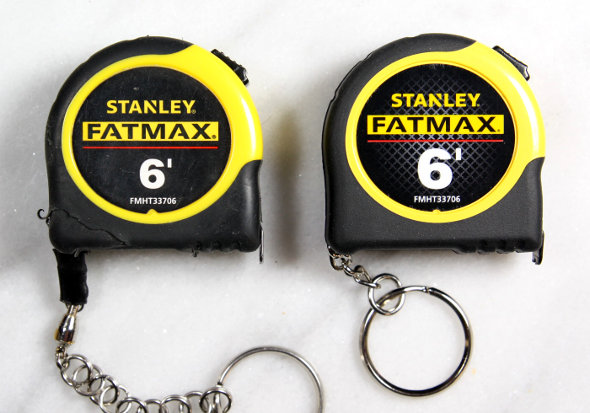 When I was at the store, I pulled out the blade of the FatMax keychain tape I was going to buy, and I was instantly disappointed. Stanley had replaced their clear and crisp blade markings with lighter and muddier grayish markings! I also noticed that the end hook just didn’t just look right.

There were only three of the tapes in stock and they all seemed to have the identical changes. I needed a new FatMax keychain tape to photograph, so I purchased it anyway and headed home. 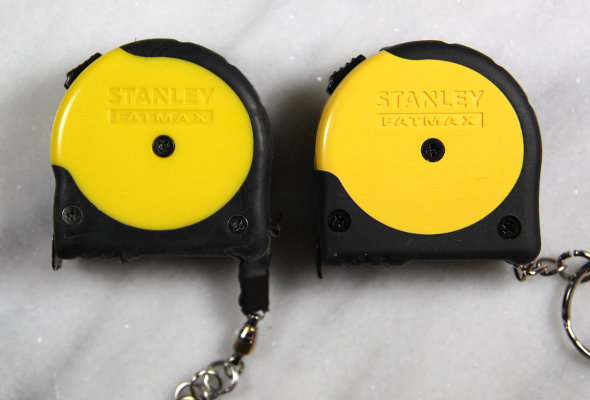 When I got home, I compared my trusty old FatMax keychain tape to the new one I just purchased. That’s when I noticed some more subtle changes to the tape measure.

First, I noticed that Stanley changed the graphic on the face of the tape, to include some cross hatching in the background behind Stanley FatMax 6′ text, as you can see in the first shot.

*In all the photographs the older model will be on the left or top and the newer model on the right or bottom.

I also noticed that the plastic overmolded housing is a slightly deeper and more appealing shade of yellow. Plus all of the edges of the new tape look crisper too, including the logo on the opposite face of the tape. 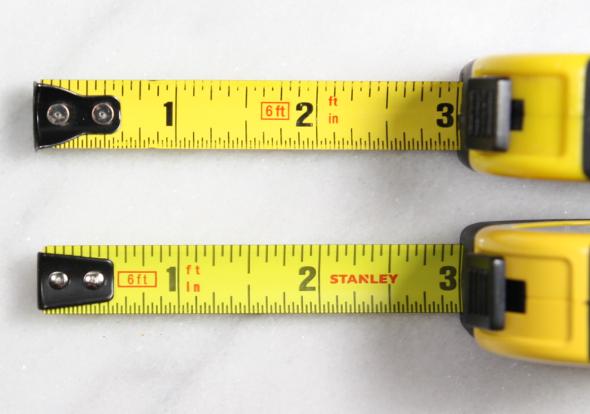 I saw the largest differences in the hook and blade. The new end hook is smaller and has a duller finish, but a smaller hook might not necessarily be a bad thing. A keychain tape is probably going to live inside a pocket and I can see where a smaller end hook might catch in your pocket less.

The problem with the new hook really comes where it is attaches to the blade. On the old tape it was difficult to read the markings from the beginning of the tape to 5/8″ because the tang partially covered them. You could still just make out what the measurement was though, although sometimes I had to count backwards from the one inch line to figure it out.

The tang of the new end hook is slightly shorter but it completely obscures the length of all the markings from the beginning of the tape to the 1/2″ mark. You can’t tell the difference between a 1/16″ marking and a 1/8″ marking by the length like you could on the old tape.

What’s that you say? Just burn the first inch and measure from the 1″ mark. First off, I shouldn’t have to: this is a poor design. Second, when you are trying to figure out if a small object is 1/4″ or 5/16″ wide, it’s much easier to press it against the hook than to try to hold it and the tape steady.

Moving to the blades, the newer blade is a sickly yellow color while the older tape is a bolder yellow. The blade also seems flimsier. With the older tape I can get still get standout of almost 4′ while the I can’t get the new tape to standout any more than 40″.

One of my gripes about the older FatMax tape is that after a year of use, the markings are starting to come off the first 8″ of the blade. I don’t know if the redesigned blade addresses this issue, but it might be the only saving grace of the blade redesign if it does. 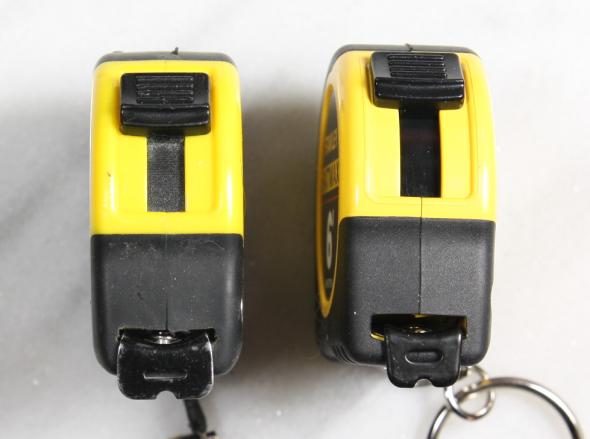 A few more changes are visible if you view the end hook head on. It looks like the slot the tape protrudes from may be wider on the new tape, that may be to stop the tape from rubbing. And you can see how much smaller the new end hook is.

It doesn’t look like there’s been any change to the chain either. After a few months of use I had to replace the chain because the links are not thick enough and were constantly bending open. 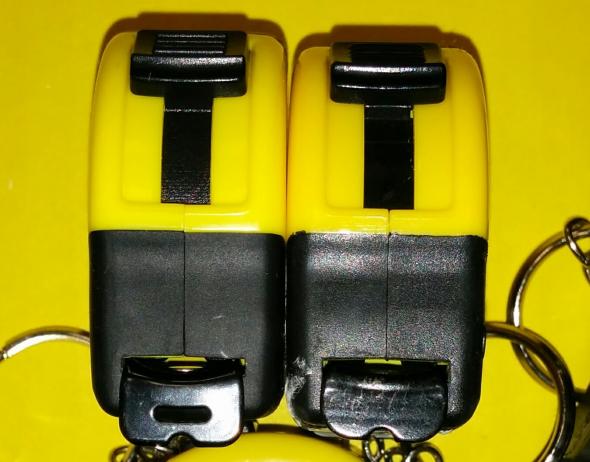 When I got to Lowes I had trouble finding FatMax keychain tapes at first, but when I did I was surprised that most of the tapes they had in stock were of the older variety I owned first. What surprised me even more is that they were carrying what seems to be a third different model. I thought it might be a fluke at first, but I found several other ones in the bin. It appears to be identical to the older model except that it has a solid end hook.

In the local stores around me, all versions of the Stanley FatMax keychain tape measure were between $3 and $4. You can also grab it for $2.54 as an add-on for Prime Members at Amazon.

I was worried that I was making too much of the change in the blade so I gave both the old and new FatMax tapes to my wife to look at. After playing with them for a few minutes she said the markings on the older one looked crisper and the new one looked blurry.

I’m really skeptical whether a person could tell the difference of a few grams, but the difference is there. The end hook is smaller and the blade seems lighter duty, I don’t know if that’s what accounts for the 4 gram difference. Maybe shaving a few grams off the weight make a case of the tape measures cheaper to ship.

Maybe these changes were meant to better the tape measure, but it doesn’t seem that way. The new tape measures certainly aren’t unusable, but if I had a choice between older and newer models, I’d go with an older one.