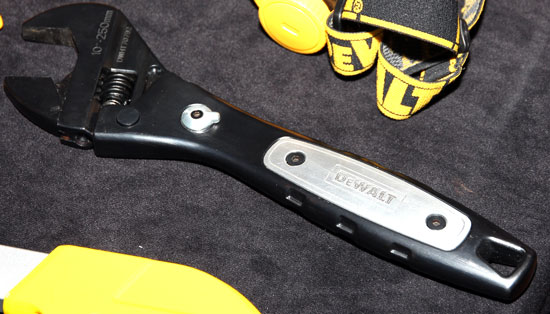 Dewalt’s adjustable wrenches are strong, durable, and comfortable to use (but not very corrosion resistance). They’re way behind our favorite Channellock/Irega wrenches, and even a step behind our go-to Stanley, but I do reach for them on occasion.

This ratcheting adjustable wrench, which was originally intended to come out under Dewalt branding, will be available starting in the Fall of 2013 under the Stanley FatMax label.

Ratcheting adjustable wrenches – aren’t they gimmicky? Sometimes. About two years ago a reader emailed in to ask for my opinion about Bostitch ratcheting adjustable wrenches. I went to the nearest Lowes to pick one up, but after testing it in-store I was so turned off by the design that I left empty-handed. Luckily, Stanley FatMax’s new offerings look to be completely different animals.

The new ratcheting adjustable wrenches will be available in 8-inch and 10-inch sizes. A selection switch allows users to toggle between ratcheting and conventional operation.

Our problem with the Bostitch models was how the mechanism seemed like it would always rub hex fasteners’ corners, potentially leading to rounding-off damage over time. The FatMax wrenches seem to be designed differently, but I won’t get too excited until I can try one at home on my own terms. The fact that you can turn the ratcheting mode off makes the wrench more appealing.

Both wrenches will feature a corrosion-resistant matte finish. An ergonomically-shaped head will make it easier to reach fasteners in limited or confined spaces, and laser-etched SAE and metric jaw scales make it easier to dial-in fastener sizes.

These wrenches were originally slated to be priced at $20 (8-inch) and $25 (10-inch), and were supposed to have been released 8 months ago.

The design doesn’t seem to have been tweaked very much, aside from the change in branding.