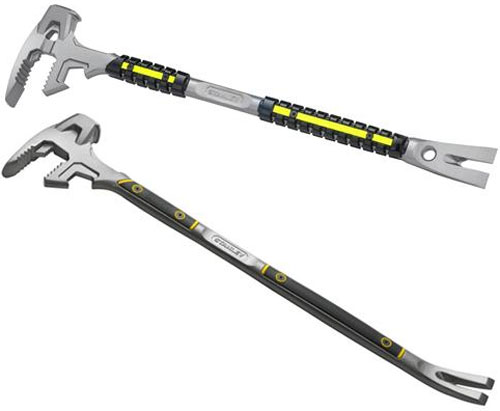 Stanley’s Fubar Forcible Entry Tool is an 8-in-1 demolition and utility tool that can be used in a number of ways. In addition to prying, splitting and bending wood boards, and pulling nails, the 30″-long Fubar can be used to shut off gas valves and as a fire hydrant wrench.

It seems that the main difference between the Forcible Entry Tool and FatMax Xtreme III versions is a 3M Scotchlite high-visibility handle vs. a simpler textured grip. Oh, and the price – the Forcible Entry version is close to $200 and the Fubar III $80. Maybe the tools are hardened or forged different, we’re not sure.

The Fubar III has been on our wishlist for quite some time now, but we could never pull the trigger. It’s something we want but certainly not something we need. A smaller Fubar handles our board-twisting needs and heavier prying tasks are delegated to a large pry bar. If we need a heavy striking tool, there’s a Wilton Bash sledge hammer somewhere around the test lab.

Earlier today we had a chance to see the Forcible Entry Fubar in action. Local firefighters were testing the fire hydrants in the area, and it looked like they came across an excessively tight nut on the hydrant right outside our window. Their hydrant wrench wasn’t cutting it, so out came the Fubar. The two firefighters struggled a bit trying to leverage the nut before switching to furious hammering mode. Once the nut budged the Fubar went back into the truck.

It was somewhat refreshing to see the Fubar used in a professional context. We use our smaller one every now and then, but never really caught this one in action. It’s good to see that the longest Fubar is as practically functional as advertised.