ToolGuyd > Lights > Flashlights > Stanley Heavy Duty Clamping Flashlight
If you buy something through our links, ToolGuyd might earn an affiliate commission. 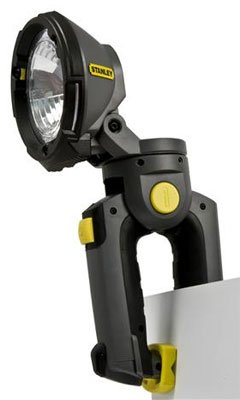 Hot on the heels of their recent SquidBrite work light, Stanley has released a new heavy duty clamping flashlight. The head of the lamp can rotate 350° and tilt 120° to ensure that it can focus light in any direction you need it to, and with its large floodlight bulb the flashlight can illuminate large work surfaces.

The flashlight’s non-marring clamp has a 4″ jaw capacity, allowing it to be secured to joists, beams, worktables, and similar fixtures. From the looks of it, the clamp also provides a nicely sized hand grip when in its closed position.

The flashlight can be powered by either 2 or 4 C cell batteries. This may seem strange at first, but it makes sense after you think about it. Four cells allow the flashlight to run for a longer time, but what if your batteries are dead and you need to find replacements FAST? It may be easier to find or swap two batteries than it would be to find four.

According to Amazon, the clamping jaw opens to 3-1/2″ (Stanley claims 4″), the bulb outputs 80 lumens of light, and the batteries last for 15 or 30 hours, depending on whether you use 2 or 4 cells.

You can pick up a Stanley 95-891 heavy duty clamp light for about $30. We’re intrigued by the flashlight, although we have seen clamping lamp styles that we like a bit better. We imagine that this light would be much better than the very weak AC clamping lamps that we frequently use, although it also costs more than four times as much.