ToolGuyd > Hand Tools > Layout & Measuring > Stanley LeverLock Tape Measures Get a Redesign
If you buy something through our links, ToolGuyd might earn an affiliate commission. 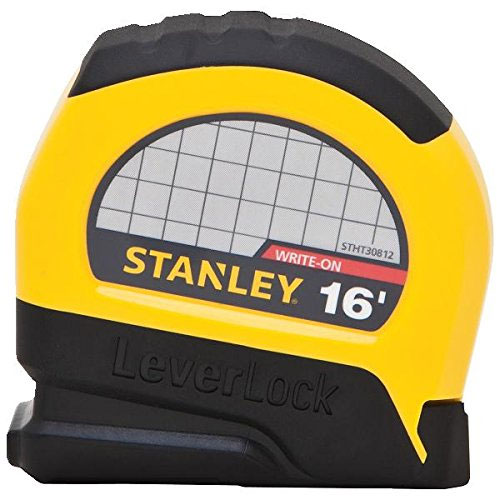 Stanley’s new LeverLock tape measures feature a squeeze-lock design. Or rather, it’s a squeeze-unlock design. Squeeze the lever at the bottom of the tape measure to release the tape, and let go to lock the blade in place.

The push-release self-locking mechanism helps to control blade retraction, and can be faster to use for quick measurements. Instead of having to reposition your thumb to lock and unlock the tape measure blade, you simply squeeze or relax your hand.

These new Stanley LeverLock tape measures also have a write-on label that’s meant to be used with carpenter pencils.

I cannot say I recall ever trying the original Stanley LeverLock tape measures, but I have used similar squeeze-lock/unlock tapes before. They’re convenient for making a lot of quick measurements, but they’re not exclusive for that type of use. With these types of tapes, you either love ’em, or you don’t.

The new LeverLock tapes look to be a solid update. They’re still basic tape measures, but that’s not necessarily a bad thing.

The bad news is that these tapes only offer 7′ of standout. On the other hand, that’s plenty for a lot of users. When I reviewed Stanley’s PowerLock tape measure 6 years ago (wow, has it really been that long?), it was one of the better tape measures I’ve used. Since then, I’ve bought a couple of better Milwaukee tape measures (here’s my video review) and used a bunch of others. But I still like using that Stanley PowerLock, and the second one that I bought in more recent years. The short standout doesn’t really bother me.

If you want longer standout, there are better tape measures out there, such as from Milwaukee, Dewalt, and Stanley as well.

We knew the new tapes were coming, ever since seeing them as part of Stanley’s 2013 logo redesign, but didn’t think it would take so long for the new tapes to hit the market.

Want more than these tapes offer? The Stanley Auto Lock tape measure doesn’t have a squeeze release, but it does have dual auto-locking and slide lock functionality. It also offers greater standout and more premium features, such as a detachable large hook. The 25 footer is $25, and Stanley recently launched 16′ and 30′ sizes.

While we’re on the subject, are you a fan of squeeze-lock or auto-lock tapes? At the prices these LeverLock tapes are selling for, I might be easily convinced to buy one.