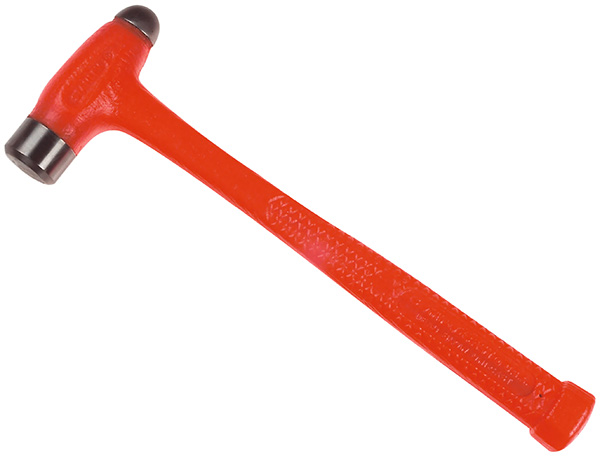 It is my understanding that the Proto version has also been discontinued, and I have been told that Proto is in process of removing the 16 oz hammer from their website.

Mac Tools still lists an identical Compo-Cast hammer on their website, but I do not have any information about whether the Mac version has been discontinued or updated in any way.

A couple of months ago a reader got in touch with us after encountering problems with Stanley’s customer service and warranty process. His Stanley dead blow hammer failed and after he sent it back to Stanley, they replaced it with a cheaper wood-handled hammer.

As you can imagine, the reader was not happy to have received a wood-handled hammer in place of the much more expensive Compo-Cast it was intended to replace.

I reached out to Stanley Black & Decker on their behalf and learned that this model was discontinued. What probably happened is that Stanley customer service sent the reader the closest replacement they could find.

The reader’s story ended on a positive note – after some back and forth, Stanley customer service sent them a 24 oz dead blow ball pein hammer, which they accepted.

Why does this matter?

Well, I have a Stanley Compo-Cast 16 oz ball pein dead blow hammer, and I really like it. I’m not thrilled that it has been taken off the market.

As you might know, ball pein hammers are the go-to for striking center punches, cold chisels, and other hardened metal materials, as well as in metal fabrication work. Ball pein hammers were traditionally used for peening work and for shaping rivet heads.

Dead blow hammers and mallets have lead shot or other materials that shift with heavy strikes. Dead blows are a special type of mallet designed for controlled rebound. Basically, you strike what you need to move or manipulate, and a dead blow hammer doesn’t bounce back the same way that a rubber mallet might.

Combine the two, and you have a dead blow ball pein hammer.

I use ball pein hammers quite often, and bought a Stanley or Proto 16 oz Compo-Cast dead blow ball pein a few years ago to see if it made a difference. Since then, I tend to use mine for smaller tasks where I want more control and a solid metal striking surface.

I also have a 3 lb dead blow hammer with steel striking face, but it’s way too big and heavy for more precise striking tasks.

The 16 oz size seemed perfect for my needs, and it has worked out well. I also like the Compo-Case handle material.

The Compo-Cast hammer design has a steel core for strength, and cast urethane outer handle. The urethane material is said to be very corrosion-resistant.

I have another Compo-Cast dead blow, and while the urethane handle grip might be a little more slippery than hammers with over-molded grips, it has never been a problem.

This is a tool I purchased for my own use, and I’d do it again – except now I can’t. If my hammer should ever fail, I suppose this discontinuation means I’d have to replace it with a different brand.

The SE brand hammer is said to have a PVC coated body, while the Gearwrench 14 oz is made in the USA and advertised as having a polyurethane-coated handle and body.

Does anyone else care?

Although this is a hammer size and style I enjoy using, it does not seem to be a popular size.

Trusty-Cook, for example, makes dead blow ball pein hammers with 26 oz being their smallest size, and it appears to be sold at fewer retailers than their 32 oz version.

Gearwrench doesn’t have a 16 oz USA-made polyurethane-handled dead blow ball pein hammer, but they do have a 14 oz model. They also have 22 oz and 31 oz hammers, which suggests that perhaps they’re advertising actual head weights instead of nominal weights, meaning it should be fair to assume the 14 oz is comparable to a 16 oz, or at least reasonably close enough.

Perhaps Gearwrench’s are legacy Armstrong products. If you recall, Apex Tool Group shut down the Armstrong tool brand in 2017, and in 2019 their website started diverting customers to Gearwrench and Crescent for striking tools.

Is the 16 oz size of dead blow ball pein hammer so unpopular for Stanley and Proto to discontinue it? Users still have Gearwrench if they want USA-made, and import brands on Amazon if they’re shopping on a budget. OR, users can step up to a larger and heavier size, but going from 16 oz to 24 oz isn’t ideal for tasks that call for a smaller and lighter striking tool. Consider the differences between a 16 oz claw hammer and 24 oz framing hammer.

Going from 16 oz to 24 oz means slightly wider striking faces and a slightly longer handle length, but the difference in head weight is going to be more pronounced.

It’s worth noting that all this happened before the COVID-19 pandemic, with communications about the matter starting at the end of February.

This isn’t really a big deal – brands do discontinue tools every now and then, but it still seemed worth talking about.

Stanley and Proto discontinued their smallest dead blow ball pein hammer. Does anyone else care, besides me and the reader that wrote in?