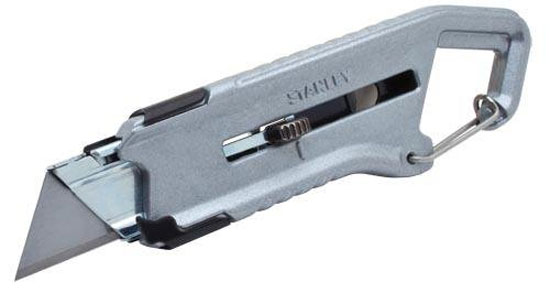 Would you believe that it has been more than five years since I first professed my affinity for Stanley’s QuickSlide utility knife!? Not the “Sport” version with fold-out serrated blade, but the basic pocketable model.

More than five years later, and my Stanley QuickSlide 10-810 still remains one of my favorite utility knives of all time.

Stanley has recently come out with a new QuickSlide utility knife, model STHT10828, which features a spring-action carabiner clip at the non-working end. It also features a built-in bottle opener.

If you ask me, the new QuickSlide knife looks a little cheapened compared to the older version, but that might not be a bad thing. The original QuickSlide is a little weighty, and it is possible the new version was engineered to be more compact and lighter without being flimsy.

You can order the new knife for ~$11 via Amazon. As for me, I am ordering another original QuickSlide knife for $9. The original doesn’t have a carabiner clip or bottle opener, and it’s not quite as compact, but it’s a rock-solid design.

If you’re looking for a new pocketable utility knife, the newish Stanley FatMax folding knife is reasonably decent for about $10. The blade recently fell out of the knife while I was using it, but I couldn’t replicate the issue a second time.