ToolGuyd > Hand Tools > Hammers & Mallets > New Stiletto TiBone 3 Titanium Hammers
If you buy something through our links, ToolGuyd might earn an affiliate commission. 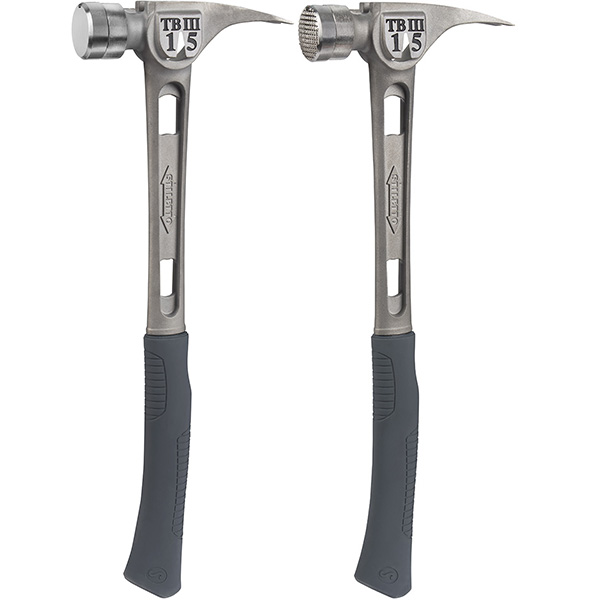 Stiletto has announced the addition of two new TiBone hammers to their popular line of titanium tools.

Press materials don’t explicitly mention it, but we know that Stiletto uses replaceable steel faces in their TiBone hammers. This means that you get the benefits of a titanium hammer body, but the strength and durability of steel.

There will be two versions – one with a milled face (TB3MC), and one with a smooth face (TB3SC). They both feature curved handles, and going by the markings, they seem to have the same 15 oz weight as previous versions. The TiBone 2 with curved handle is 17-1/2″ long, and I’d assume the new TiBone 3s are the same length. 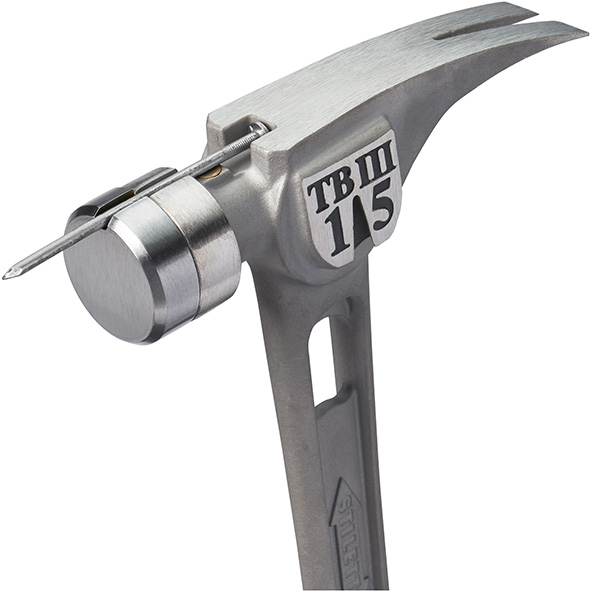 The 3rd generation TiBone hammers feature a newly designed anti-rotating face, which Stiletto says ensures users no longer have to worry about the hammer face shifting or coming loose.

They hammers also feature a redesigned magnetic nailset, enabling users to start nails in hard to reach places, and a side nail puller. At the rear, both hammers have straight rip claws.

The new nail starter design does look to be an improvement over the previous design, capturing nail heads and preventing slip-out.

I posted a lengthy discussion about titanium and “titanium-like” hammer marketing claims. I’m still NOT entirely convinced about the marketing claims. However, many USERS generally prefer the FEEL of titanium hammers over steel. Stilleto TiBone users love their hammers.

Stiletto TiBone titanium hammers are said to “drive like a 28oz steel hammer,” and deliver “10X less shock than steel” while still being “incredibly strong, powerful, and lightweight.”

With the TiBone 3, Stiletto seems to have made their best titanium hammer even better.

Raise your hand if you’d like to see a review. Frankly, I really want to see how the new anti-rotational face design works.

For those of you that have used the Stiletto TiBone I or II, what has your experiences of it been like? Will the new TiBone 3 solve any frustrations you might have experienced?

Press materials say that “Stiletto is growing its product lineup with the addition of two new TiBone Hammers,” which to me suggests that TiBone 2 and 3 hammers will be sold alongside each other for some time, but I would expect for the TiBone 3 to eventually replace the TiBone 2.