ToolGuyd > Editorial > Surefire Cyber Monday Flashlight Deal Fiasco
If you buy something through our links, ToolGuyd might earn an affiliate commission. 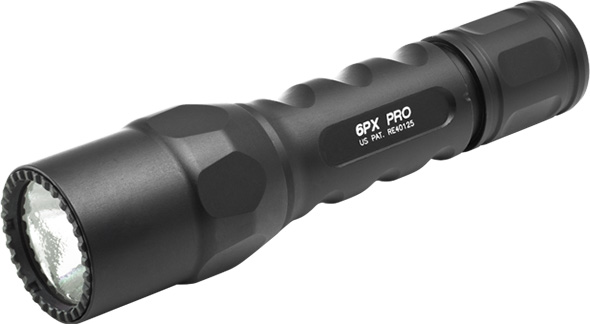 On November 28th, I was starting to recover from Black Friday and Cyber Monday chaos, and hit up a deals site to see if there were any good deals for me to take advantage of.

I came across a post about a Surefire Black Friday and Cyber Monday deal. It mentioned two Surefire 6PX LED flashlights for $56. It was $38 for one, $56 for two after coupon code ALLTHELUMENS.

I then saw mention where there was a bonus free Sidekick LED flashlight. I didn’t see mention of this on Surefire’s site, but lo and behold, it worked. The coupon code set the flashlights at 2 for ~$56, and the Sidekick keychain light to $0.

But it wouldn’t let me check out, saying there was a “tax calculation error” and to try again. In the deals forum thread, someone said that adding (3) of each was the only way they got it to work.

Something seemed fishy, as I didn’t see mention of the free Sidekick light anywhere, but I did see multiple websites reporting the “2 for $56” and “$26.60 each” deal for the 6PX flashlight.

December 2nd: Surefire sent out an email with a “backorder notice.” Uh-oh.

And then on December 14th,

THANK YOU FOR YOUR PATIENCE

That’s the last I heard from them. There have been no further instructions about how to place a new order. The 6PX is currently $38, which isn’t terrible, but it’s appreciably higher than the $26.60 deal price.

A lot of people are really, really mad at Surefire about this. I’m annoyed, but more at their handling of what does seem to have been some kind of series of pricing or transaction errors.

Communication has been poor, and the lack of resolution disappointing.

Surefire seems to be trying to sweep this debacle under the rug by simply ignoring what happened, as well as ignoring their customers.

I really just wanted 2 of the 6PX flashlights at $26.60 each, and 1 of the Sidekick keychain flashlights for free would have been nice.

It looks like the Sidekick is currently $40 on their website, at half off the regular price of $80. For a keychain flashlight?

Surefire never apologized for what they’re calling incorrect pricing, nor did they follow up with “instructions on how to place a new order.” They didn’t take ownership or responsibility for the issues, and that’s really bugging me.

Customers are not happy.

I try to be understanding with price mistakes. In this case, there didn’t seem to be any clear indication that there was a price mistake. Instead, I considered that maybe they intended for there to be 1 free Sidekick per order, but the limit was set improperly. Adding 3 of each was the only way to get the checkout process to past the “tax calculation error” issue, which suggested something was amiss, but I didn’t see any connection between that and the pricing.

There are some customers less understanding than I, and they’ve made it their mission to punish Surefire, with social media bashing, stated intentions to contact the BBB, FTC, and other agencies with complaints about “bait and switch.”

This doesn’t seem like a “bait and switch” situation, it just seems like a series of errors and then a failure of Surefire to handle things quickly or to anyone’s satisfaction.

A company like Surefire is likely more experienced in dealing with distributors and large customers, such as businesses, government agencies, and other large purchasing entities. With this screw-up that involves a large group of individual customers, they simply don’t know what to do.

I’ve been following forum threads and social responses, and there’s a lot of bad feelings. I also saw one post where Surefire says that their “allthelumens” coupon code was for 30% off a radio, and not their flashlight. (That’s how the price went from $38 to $26.60, with the allthelumens coupon taking 30% off.)

When something goes wrong, when mistakes are made, the best course of action is to find a way to make everyone happy, or at least a little bit happy.

It took Surefire two and a half weeks to send an all-caps email announcing order cancellations, with no follow-up beyond that. It looks like they decided not to even honor their Cyber Monday pricing on the flashlights, holding firm at the $38 pricing on the old model.

I think this will serve as an interesting case study, as an example of a good company handling something very poorly.

If in the near future you hear someone complaining about Surefire, and more about the brand and company and not their products, this is why.

What would YOU have done if in charge of Surefire’s “damage control” efforts?

Me? For customers whose orders were cancelled, I would give them the opportunity to buy a set number of the flashlights at the same $26.60 price and free shipping offer as on Cyber Monday. Max of 2? 5?

You KNOW that there are some customers that tried to order (20) of each. Those orders shouldn’t be fulfilled.

For the Sidekicks? There can’t be any added conditions or requirements, lest it give greater credence to the “that’s bait and switch!” idea some customers have. So for that part, I’d say sorry and leave it at that. I can’t see any reasonable way for Surefire to give them away for free, assuming that its $0 price was the result of web errors and not in any way tied to any promo. If it was tied to a promo, say “free with $50+ purchase,” then it should be honored with a limit of (1) per customer.

This solution wouldn’t hurt Surefire (much?), but would make most customers reasonably satisfied. At least I’d be. And that’s important. You never know what position someone will be in, 2, 5, 10 years down road.

Figuring Out My EDC Flashlight Preferences