ToolGuyd > Hand Tools > Layout & Measuring > Swanson Speed Squares
If you buy something through our links, ToolGuyd might earn an affiliate commission. 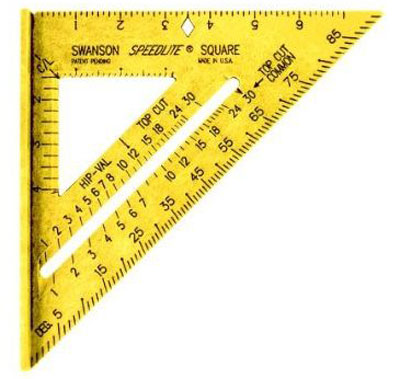 Swanson Speed Squares can be used as a try square, miter square, protractor, line scriber, and saw guide. In other words, it’s a pretty handy layout tool that should be found in every home and shop. At the very least, it makes an excellent straightedge.

We’ve been using an orange Swanson Speedlite square for about one years now, and it’s held up pretty well, especially for a “homeowner” grade product.

If we had to replace our square, we’d either go with the yellow Speedlite as it seems to have clearer defined markings, or upgrade to one of Swanson’s aluminum Speed Squares.

Swanson’s Speedlite Speed Squares will set you back about $4-$7 (currently $4 via Amazon), which is surprisingly inexpensive. The aluminum Speed Squares are of course a bit costlier.

The Speedlite we purchased a year ago was made in the USA.