ToolGuyd > New Tools > New Tanos and Festool Systainer³ Modular Tool Boxes
If you buy something through our links, ToolGuyd might earn an affiliate commission. 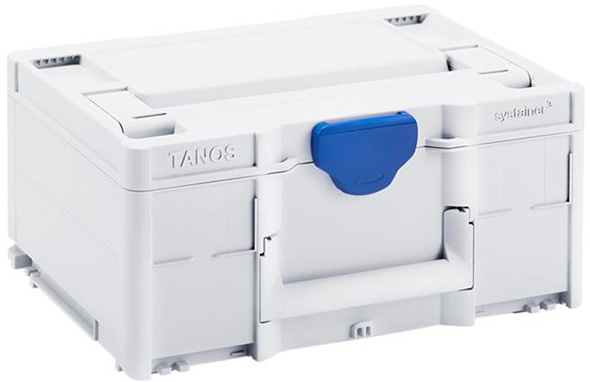 We received information that Tanos, a company owned by TTS Tooltechnic Systems and known best for Festool, is coming out with a new line of Systainer modular tool boxes, called Systainer³. (Thank you Dan for the tip!)

This will be the third generation Systainer tool box. The first, Systainer Classic, connects to other Systainers via 4 latches and opens or closes with 2. The Systainer T-Loc greatly simplified things by featuring a single rotating latch that can be used to open and close the tool boxes and for stacking.

The new Tanos/Festool Systainer³ is similar to the T-Loc Systainer, but with a number of upgraded features. Shown above is the Medium Systainer³, similarly sized to existing products and 396 mm x 296 mm in size (~15.6″ x 11.7″).

The Medium Systainer³ will be available in six different heights. It is said to be fully compatible with T-Loc Systainers and cal also be integrated with the Classic tool boxes. 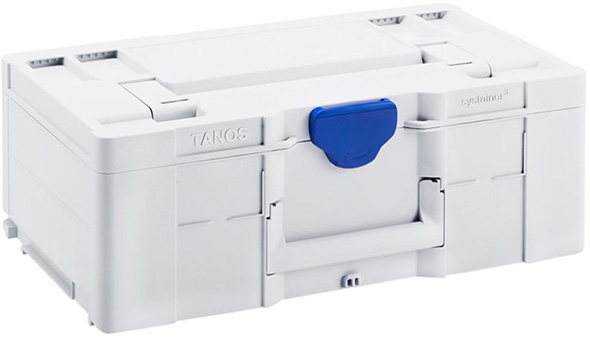 There will also be a Large size Systainer³, 508 mm x 296 mm (20″ x ~11.7″), available in three different heights. The Large Systainer can be integrated with all sizes of Systainer³ and T-Loc Systainer tool boxes. 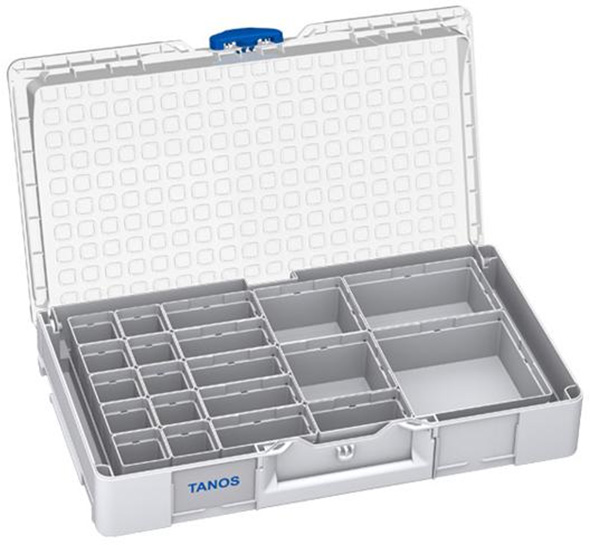 Tanos and Festool are also introducing a new slim Systainer³ organizer, available in Medium and Large sizes. The insert boxes are removable, allowing users to bring parts to their work, and for greater organizer customization options.

Dimples in the bottom and the lid secure the insert boxes to ensure to ensure that nothing slides around when the case is being moving around. The clear lid allows for easy identification of contents even when closed. 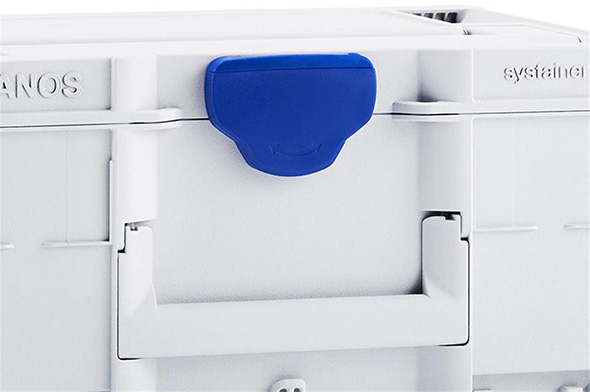 First, there’s a front handle built into the smaller cases, allowing them to be carried upright, briefcase-style. The taller Systainer sizes will not include the front handle.

(A front handle accessory is available for the 2 smallest sizes of [previous] T-Loc Systainers, but you had to give up the label slots to use it.) 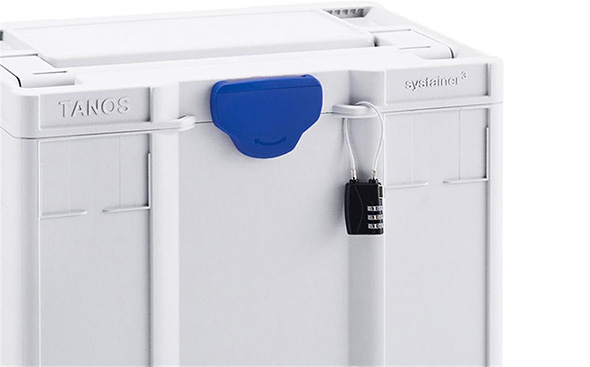 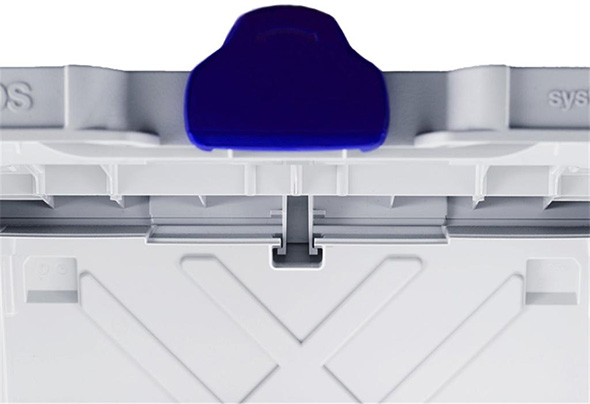 Tanos says that the Systainer³ is even more stable than its predecessors thanks to its optimized design structure with third lid hinge and raised reinforced bottom cross.

I’ve had oddly-loaded T-Loc Systainers, such as filled with a vacuum hose, that would twist and become difficult to close. If the new Systainer³ tool box design has increased rigidity, that’d be a big plus. 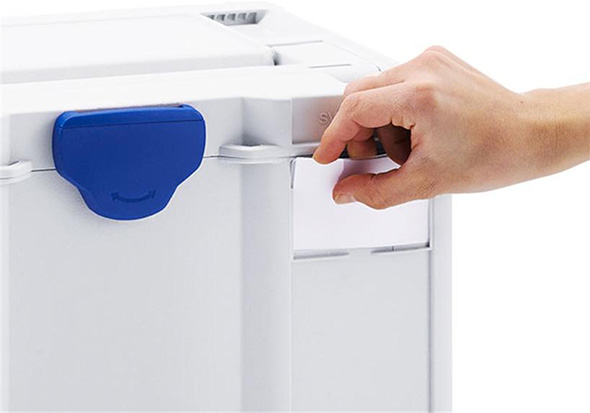 The Systainer³ allows for easier and quicker label insertion, even when the boxes are closed. 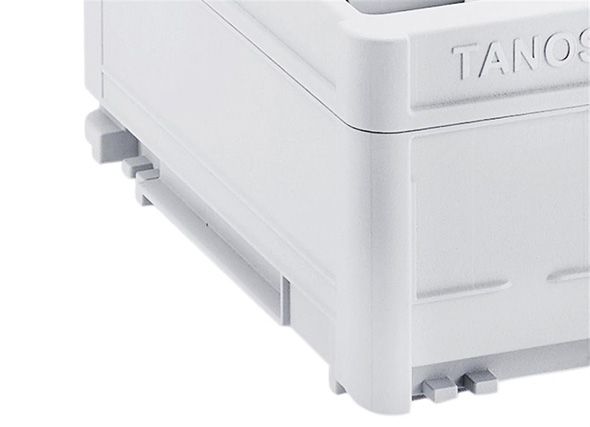 Tanos availability is usually very limited in the USA. It is highly probable that we will see the Systainer³ tool boxes in the USA and North America under Festool branding. Promotional materials say that Systainer³ is powered by Bott, Festool, and Tanos, and also feature Systainer³ tool boxes with Festool-green latches, but there have not yet been any official announcements by Festool USA.

Festool is releasing the new Systainers in Europe, and so we *should* be seeing them in the USA.

The new Systainer³ tool boxes will have different labeling and also different heights compared to T-Loc Systainers. The chart above was sourced via Festool Sweden. It is possible the heights are different to ensure that the new Systainers can fit existing inserts and accessories, or there could be other explanations.

Update: A post on the Festool Owners Group suggests that the new dimensions allow for a smaller common denominator that could facilitate stacking. Or, it could bring the Systainer heights inline with van racking equipment from Bott, their partner.

If you’re not familiar with Tanos or Festool Systainers, the changes being introduced by the Systainer³ tool boxes are actually quite significant.

You can add a front handle to the two smallest sizes of Systainers, for $18 each. I have sometimes wished for my Systainers to have alternate carry options, but never felt like adding a front handle to each of them. But also, I never fully trusted that they could be carried that way.

Systainers are fantastic tool boxes, but there are times when they’re not exactly easy to work with. I bought the older version of the workshop cleaning set a few years ago, and the hose twists the sides of the box, making it difficult to close. The new Systainer³ tool boxes are said to be sturdier, with an additional lid hinge and structural reinforcements on the bottom. Tanos doesn’t specify the way in which these tool boxes are more stable, but any improvement is welcome.

The locking loops won’t stop a determined thief, but might stop some opportunistic thieves or maybe colleagues from borrowing your tools or equipment. The loops look to be sized for luggage locks or similarly small locks. And, from the looks of it, the loops are only made from the same plastic as the rest of the case.

The biggest change is the built-in van racking slots. Potentially, this could also allow for new styles of workshop Systainer Ports or other such storage accessories.

I couldn’t find any pricing details, but hopefully the new Systainers won’t cost much more than the already premium–priced T-Loc Systainers. I would presume that Festool tools will transition between being bundled with T-Loc and Systainer³ tool boxes, but as mentioned USA availability has not yet been officially announced. I would guess that USA availability will follow the European launch by some time.