ToolGuyd > Accessories > Tekton USA-Made Polyurethane Bungee Cords and Straps Review
If you buy something through our links, ToolGuyd might earn an affiliate commission. 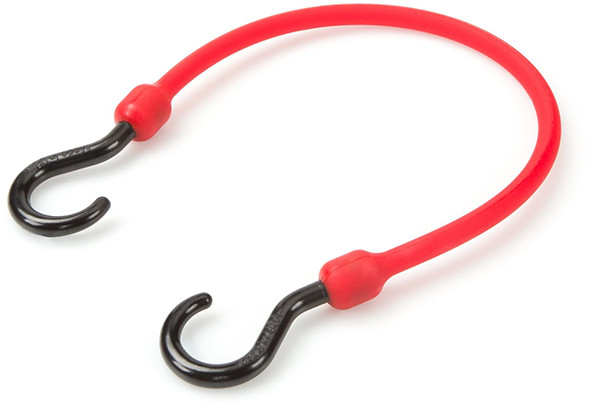 Tekton sent over a bunch of these red polyurethane bungee cords a while back. While I don’t use them on a daily or even weekly basis, I do use them regularly and have come to consider them quite favorably.

I didn’t test most of these aspects, but so far the various bungees and straps have held up well.

There are several different styles. First, there are cords, as shown above. 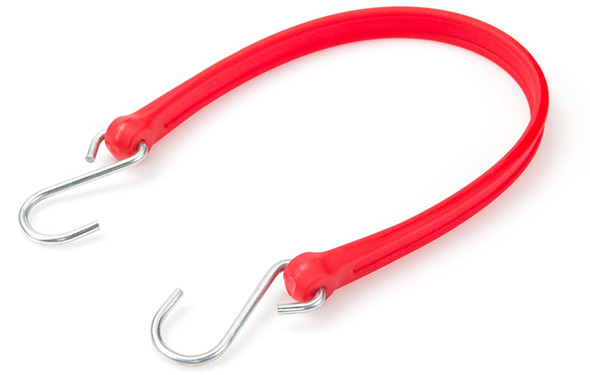 There are also straps, which are thicker and presumably heavier duty. 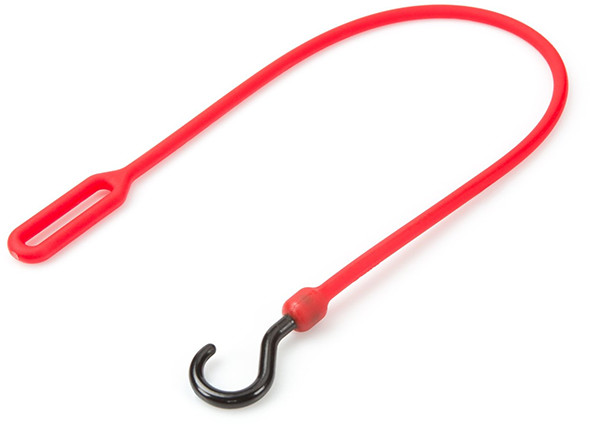 Adjustable cords, with a loop at one end and hook at the other.

And lastly, adjustable straps, with holes that allow you change the length to suit the application.

I mainly use the cords and straps that Tekton sent over. They sent over (1) each of a several sizes, and I believe the 18-inch size has been most versatile, followed closely by the 24-inch size. I often double-up to create greater lengths, which means I should probably buy some more of the longer ones.

The cords are easier to stretch than the straps, but I trust the straps for heavier demands, as the straps also move a little less after attached. A cord might roll along the side of a box a little, while a strap usually stays in place, at least more so.

There are two ways I’ve used these. First, I use them to strap loads to folding hand dollies. If I need to move something on a dolly or hand truck, such as the awesome $25 folding hand truck that I posted about last winter, bungee straps help to stabilize wobbly loads, especially when I have things stacked up.

I also use bungee straps to carry several smaller packages to UPS, FedEx, or the post office. A bunch of loose boxes aren’t heavy, but can be awkward to balance. It becomes even more awkward if I’m carrying my toddler son. I wrap the bungees around the package, and grab a strap as a makeshift handle. If the boxes are uneven in width, there’s a gap on the side that’s perfect for grabbing.

I have lost count about how many times I’ve used these Tekton straps. Generally, I like the plain double-hook-ended cords and straps best. I wish there was a weight or load limit so that I don’t ever accidentally over-tax them.

Tekton says you can stretch them to twice their length, but I’m certainly not capable of doing so. The way I use them, I typically stretch these bungees by 25%, maybe up to 50%. I haven’t measured this, it’s just an eyeballed guestimation. But certainly not by the full 100% elongation they’re supposed to be capable of.

Amazon’s pricing is a little weird, in how smaller lengths are sometimes pricier than longer ones. The lowest price I have found, as of the time of this posting, is $7.27 for the 18-inch cord, followed by $7.79 for the 24-inch strap. These are sold individually.

I really like my Master Lock bungees that have finger hooks for easier attachment, so I won’t replace those anytime soon, but I also definitely like these Tekton bungees more than any other regular-sleeved rubber bungees with coiled hooks.

I do recommend these Tekton bungee cords and straps, and will eventually buy a couple more for myself. As mentioned, I find the cords and straps to be most useful, but if I can’t find the size I need I simply reach for one of the adjustable ones.

As an aside, when I think of polyurethane, I typically think of wood finishes. I also have some small-diameter polyurethane pneumatic tubing. I don’t think I’ve seen any other super-elastic polyurethane product or application – have you?

Thank you to Tekton for providing the test samples unconditionally.