ToolGuyd > Hand Tools > Pliers > It’s Back! Hot Deal: Save 25% off Tekton’s USA-Made Pliers!
If you buy something through our links, ToolGuyd might earn an affiliate commission. 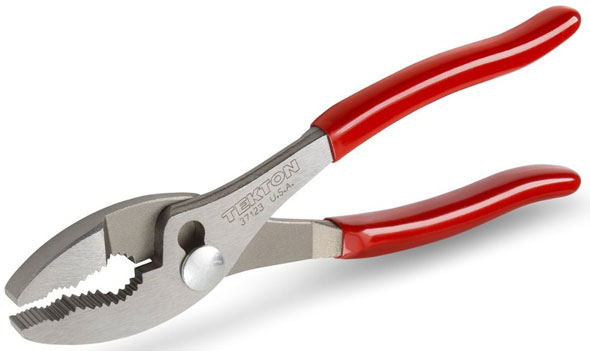 This is a deal some of you might definitely appreciate! Now (August 14th, 2015), through an unspecified expiration date (possibly the end of the month), you can save 25% off Tekton’s new USA-made pliers at Amazon.

In order to receive the 25% discount, you must “clip the coupon” for the pliers you want to buy. There’s a button for you to do this right below the price on each product page.

IMPORTANT NOTE: There are a couple of coupon limitations, such as one coupon per customer, which seems to mean you can only use it on (1) item. I added two eligible pliers to my cart after “clipping the coupon” for both, and 25% was only deducted from the price of one of the pliers.

Still, I figured some of you might be interested in this deal. As mentioned in our review of the new pliers, they’re pretty decent. They’re basic – but sturdy – inexpensive pliers. They’re made in the USA, but priced around the same as entry-level imported pliers.

The promo includes all of the new slip joint and tongue and groove pliers.

This deal first appeared in Summer of 2014, and reappeared in August 2015. I simply updated and republished the older post, which is why some of the comments are from 2014.

Additional Tekton pliers are on sale, such as this 3pc set, and many of the new but imported red-handled pliers. The best bet is to sort through Amazon’s Tekton Pliers listing and look for where it says 25% coupon available or save 25% with coupon.