ToolGuyd > Editorial > Test Apparatus Roadblock: Linear Bearings Issue
If you buy something through our links, ToolGuyd might earn an affiliate commission. 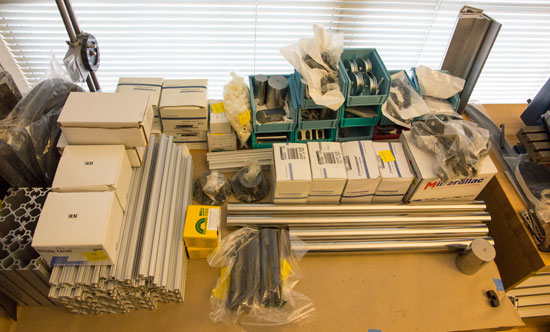 This week I started work on the Bosch testing project previously discussed in Overview and Tools & Measurement posts. There will be a post on the testing apparatus I’m building, but later on.

Above is the testing apparatus in what I like to call the pile of parts stage.

I built most of the frame last night, and started working this morning on a horizontal sled. The sled consists of supports, precision round rods, and pillow blocks with built-in ball bearing modules.

Early on I decided on 1.25″ linear railing for two reasons – the pillow blocks have 2″ spacing which will help them easily mate with 80/20 components, and because the added rigidity allows the rails to serve as structural components.

I went with Thomson closed pillow blocks, more specifically their Super Smart Ball Bushing Bearings, SSUPB20. I have not worked with linear motion components a whole lot, but Thomson has a great reputation and I figured there wouldn’t be any snags.

These bearings are said to represent a major advancement in linear bearing technology worldwide. They are also supposed to have the lowest coefficients of friction in the industry.

I cleaned the rails and mounted the blocks. They were hard to move and dragged a lot. I then lubed the blocks. No improvement. I called Thomson and spoke with their technical support. The blocks are supposed to move smoothly.

How bad were the Thomson bearings? They couldn’t slide down vertical rails under their own weight! That’s pretty bad. Horizontally, with both bearing blocks coupled together, it took over 15 pounds of weight to get them to move.

I then spent the entire morning trying to figure out what I was doing wrong. The blocks move clunkily on their own, so it’s not as if external attachments were causing them to bind. Surely something I did was causing these issues.

Ball bearings sometimes move easier under load. So I applied a load on top of each of the blocks. Did they move smoothly? Nope.

Finally, I tried two NB pillow blocks (TWA20UU) I ordered for another part of the project, and they work beautifully well. The NB bearings are a little different in design, but both Thomson and NB bearings are designed for up to 1° of misalignment, and both have seals on both ends to keep crud out and lubricant in.

The NB bearings cannot support as heavy a load as the Thomson bearings, which probably means the Thomsons have smaller and tighter fitting bearings that create greater drag. Still, the level of friction and drag I was seeing just doesn’t seem right.

The rails I was using were Thomson-made as well, so it’s not as if I used off-brand rails with different tolerances or diameters.

Right now, I’m thinking that the Thomson bearings are just too heavy-duty for my application, or maybe there was something wrong with them – stranger things have happened. The NBs can support 1230 lbf of dynamic load and 1530 lbf of static load, which is a lot of force. If the NB can be easily and smoothly moved by hand, then surely the Thomson with its 2350 lbf dynamic load rating could too?

Either way, I am now at least a little bit wiser, although I still don’t quite understand why the Thomson bearings were just so unsuitable.

I suppose I could have contacted Thomson to see if the Super Smart ball bushing pillow blocks would be suitable for my application, but nothing in their design notes or spec sheets suggest they wouldn’t work with low loads. I thought I was spot-on with my initial product selection.

Now that I know the NB bearings work a lot better than the Thomsons, which could also just be defective, I have 4 more NM pillow blocks incoming from McMaster and the 4 Thomsons are on the way back to Zoro.

What’s Most Important to You when Choosing Cordless Power Tools?