ToolGuyd > Power Tools > Cordless > The First Dewalt “Tool Connect” Tools Hit Amazon
If you buy something through our links, ToolGuyd might earn an affiliate commission. 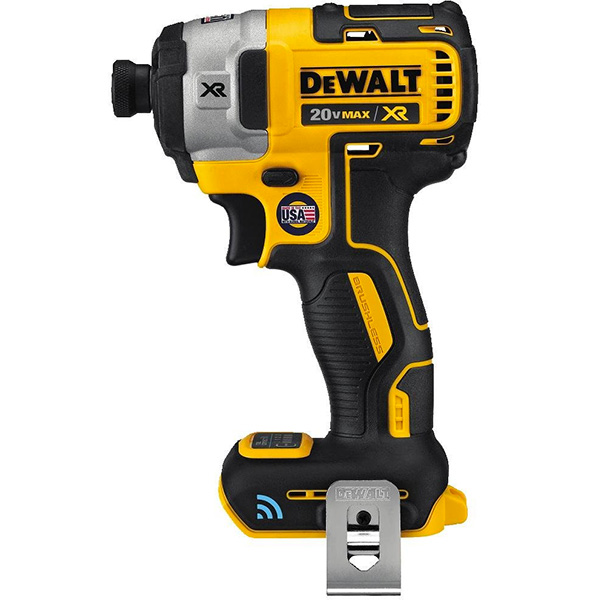 Amazon sometimes lists new tools weeks or even months ahead of their release.

But the point is this – Dewalt Tool Connect tools are on the way. I’m actually rather excited. Having customizable tools is a big deal. I like the idea of being able to dial in the torque as needed, or switching between special torque modes.

Well, in theory at least. To be honest, I don’t use my Milwaukee One-Key drill or impact test samples very often. I don’t reach for the tools and change settings for one-off fasteners, but for larger projects that involve many fasteners, the benefits add up.

The ability to tweak a tool’s LED worklight settings is also convenient, but not needed. The ability to control an LED worklight, perhaps one mounted out of reach or far from where work is being done – that’s more of game-changer.

The current generation of brushless impact drivers offer multiple speed and torque settings, and some have special modes, such as for the precise and careful driving of self-drilling screws in a fast and efficient manner.

Tool Connect, One Key, and other potential tools allow for users to program their tools to in-between settings. Sometimes the precision is needed.

On a drill, have you ever been stuck between two settings – a lower one which doesn’t deliver enough torque, and a higher one that over-drives a fastener? Well, that’s the beauty of Tool Connect and other such customizable tools.

We’re now seeing greater potential of tool customizations, with the advent of more complex drive controls, where with the help of sensors an impact can deliver different speeds and torques at different points of an application.

I mention all this because I know some users will denounce Tool Connect as a gimmick, just as they denounced One-Key. To be frank, it’s not going to be useful to everyone. But we are seeing a lot of benefits, some of which are tool-dependent.

We’re probably not far away from voice commands, where you can tell your phone “I’m using a 2″ hole saw in steel” and have it automatically set the tool to the right speed.

Anyways, back to the point – a few Dewalt Tool Connect tool listings have popped up on Amazon.

So that means Milwaukee has One-Key tools on the market, Dewalt Tool Connect tools are on the way to market, and Bosch has some hypothetical customizable tools that they announced to the European market over a year ago.

Despite some readers’ cries of “this is gimmicky stuff that will never sell,” big brands are digging their heels in and dropping lots of cash to develop what they see as the next leap forward in jobsite productivity.

Either they know something, or they’re taking big risks.

I just returned from Milwaukee’s NPS17 new product show. From what I saw, regarding what they’re doing with One-Key, and what One-Key is doing for them, I’m inclined to think that these brands are taking risks, but they also know things that we don’t, and they’re learning more.

The age of Dewalt Tool Connect is nearly upon us*. Who’s excited?!

The tools are currently listed as “temporarily unavailable,” but you can still order them now. There’s no word as to when they will start shipping.

And yes, I know that technically these aren’t the first Tool Connect tools to be available. There’s an DCL070 LED area light, and Bluetooth battery packs. But tools such as drills and impact drivers are a whole other level of product offering.