ToolGuyd > Power Tools > Cordless > Thermal Image of a Cordless Drill
If you buy something through our links, ToolGuyd might earn an affiliate commission. 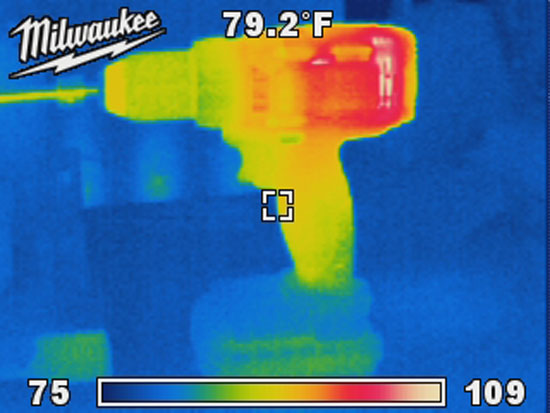 This week I’ve been doing some further testing on Porter Cable’s new 20V drill/driver and though to snap a quick image after drilling a dozen 3/8″ holes in particle board.

I really meant to send back the Milwaukee’s M12 thermal imager loaner sample by now, but its use has been incredibly illuminating. Look for the full review very soon.

The image doesn’t really show you anything you probably didn’t already know – that the motor and its casing get a bit hot during use. As you might have experienced, the heavier a cordless drill or driver is tasked, the hotter the motor will get.

110 degrees is actually not very hot at all, at least for a DC motor. If I had three hands I would have been able to capture an image of the drill/driver and motor while in use or immediately after. This image was taken about a minute or so after the twelfth hole or so, giving the motor some time to cool off.

Cordless drills and drivers are built with air vents and small fans inside so that heat can be dissipated from the motor. Heavier duty tools are capable of greater heat dissipation than compact lighter duty models, but they too have limits.

Some modern drills will turn themselves off to protect their motor and battery when pushed too hard. Others might just stall. Push them further and you might see a puff a smoke coming from the air vents. If you continue to push and push and push the drill or driver, this is what happens.

If I grabbed an auger bit or other large diameter drill bit and pushed the Porter Cable drill – or any other compact drill – to drill a series of holes in wood very quickly, the motor temperature would have risen sharply.

So what happens when you release the magic smoke?

A common joke about electronic components and devices is that they’re damaged beyond repair if any of the magic smoke gets released. DC motors are similar. If you see smoke coming from a tool, it usually means that the internal temperatures are too high and something is melting or burning up.

It is not normal for a cordless drill or driver to release any smoke at all. If you see smoke, it means you probably pushed the tool too hard. A little smoke corresponds to minor damage that probably won’t affect the performance of the tool too much. A lot of smoke means it might be time to search for a higher powered upgrade or replacement.

Both brushed and brushless DC motors have wire windings that generate the electromagnetic fields used to create rotational motion. This involved thin wire – often copper – that is tightly coiled around the armature. Around the wire is a thin layer of varnish or enamel coating that insulates each loop of wire from the others around it.

When the wire heat up beyond a certain temperature, the thin layer of insulation will start to melt or burn off. Once that happens, short circuits will start to form, leading to diminished performance.

Short circuits won’t appear along the entire length of the wire or with every loop all at once, at least at first. But if the tool isn’t given a break, the wire temperature will remain high and might even increase further, leading to continued irreversible damage and much greater performance losses.

A small puff of smoke could potentially also be from remnant grease or foreign particles that made their way inside the motor housing. But when you see plumes of smoke, that’s the motor destroying itself.