ToolGuyd > Power Tools > Saws > Thinking Aloud About the Bosch Reaxx Table Saw
If you buy something through our links, ToolGuyd might earn an affiliate commission. 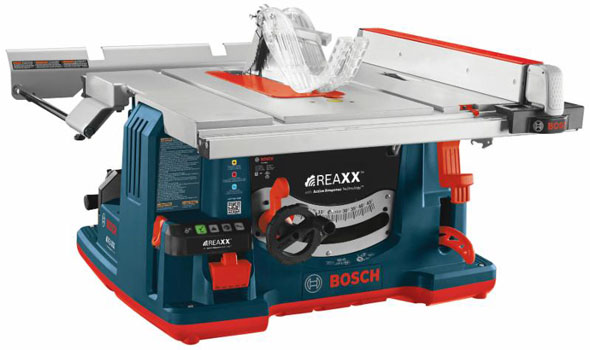 As recently mentioned, the Bosch Reaxx portable table saw, a new model that features flesh-detection and blade-avoidance tech, is expected to hit the market in just a few weeks.

When looking into the SawStop vs. Bosch lawsuit, which still seems silly to me since the Bosch tech looks completely different, I discovered some rather troubling trends.

Cases were constructed around the argument that brands were liable for users’ injuries because the saws didn’t incorporate SawStop-like flesh-detection and blade-braking technologies.

“Negligently defective” was how they described a traditional table saw.

In one of my posts about the Reaxx, someone made the analogy as to whether someone can sue an auto manufacturer if their car lacked collision-avoidance braking.

What I found, in my recent search for a new SUV, is that a lot of brands offer collision detection braking, typically only on top-end trim levels, or as part of safety tech packages. But they still offer it in some capacity.

So that got me thinking. In a table saw injury lawsuit, where the main argument focuses on whether a brand is negligent for not offering flesh-detection safety features, the argument could or should have been made that a user could have bought a SawStop if they wanted such technology and features. Brands can’t exactly say that, but perhaps their defense would be stronger if they offered such technologies in a saw.

Until now, I had assumed that Bosch’s development of the Reaxx saw stemmed from a desire for the brand to offer a saw with their own flesh-detection and blade-avoidance technologies. Step 1: Develop competitive table saw safety tech; Step 2: Sell saws; Step 3: Earn more revenue.

Makes sense, right? Most brands design and market tools because they want to sell them.

But, could it be that part of Bosch’s reasoning for developing and marketing the Reaxx saw is to reduce their potential for liability?

When a brand comes out with a new tool, selling the tools is usually going to be the biggest motivation. But it doesn’t end there. Maybe a brand wants to build brand awareness, or maybe they want to build brand loyalty. That sometimes factors into whether a tool moves past initial development and makes it to market.

Okay, so let’s say a user removes the safety guard of a different Bosch saw. Or maybe a Skil saw. They remove the riving knives too. Then they raise the saw blade to 3-inches to cut 1/2″ plywood. (Good practice says to only raise the blade as high as you need to, which is typically only slightly higher than the thickness of material being cut.)

A lapse of judgement, attention, or a combination of other factors and bad luck, and the user suffers an injury.

It has been popular for injury lawyers to claim manufacturers as being negligent for not offering table saw safety tech. In some of the cases, this seems to be supported by “expert testimony” that brands’ legal representation had passive aggressively suggested as being “conspiratorial.”

With the Reaxx table saw in Bosch’s lineup, the argument of a saw being “negligently defective” pretty much goes out the window. Bosch could make the argument that “we offer a saw with flesh detection and blade braking technology, but the user chose not to buy it.” Or something to that effect. I’m not a lawyer, but I would assume they’d make a similar argument.

So with all that in mind, and what I’ve read in table saw injury lawsuit documents, I’m left wondering whether legal protection, or reduction in alleged liability, for lack of a better description, had anything to do with the creation and launching of the Bosch Reaxx table saw.

This is all just me thinking aloud. Maybe I’m completely off base here, and this never factored into Bosch’s decision to develop the Reaxx, not even a little bit.

Here’s something else to consider: how will the Bosch Reaxx influence the industry? Will there be even more pressure now, for Dewalt and other table saw makers to come out with their own flesh-detecting and blade-avoidance technologies?

Oh, and the Reaxx is now available for ordering on Amazon. The saw is still expected to launch in June.