Home Depot: Deals of the Day on Painting Tools and Supplies 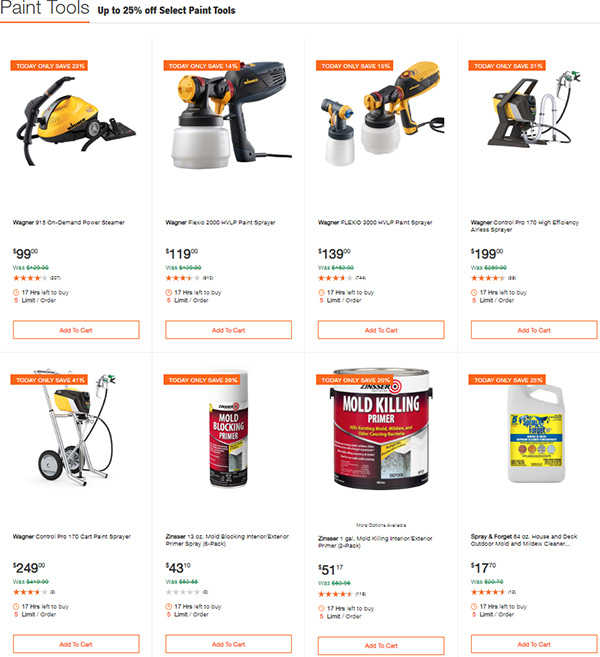 There are a ton of painting products included in today’s special buy deals of the day at Home Depot.

One of the deals that is holding my attention is a small HomeRight collapsible spray shelter. Amazon had it for $20 over the holiday season, but I missed that deal. It’s currently $21.47 at Home Depot with free delivery. Amazon’s current price is ~$29.

These deals end at 3am ET 3/4/2020, unless supplies sell out sooner. There are a couple more deals, including the HomeRight spray shelters, beyond what I could show in above screenshot. 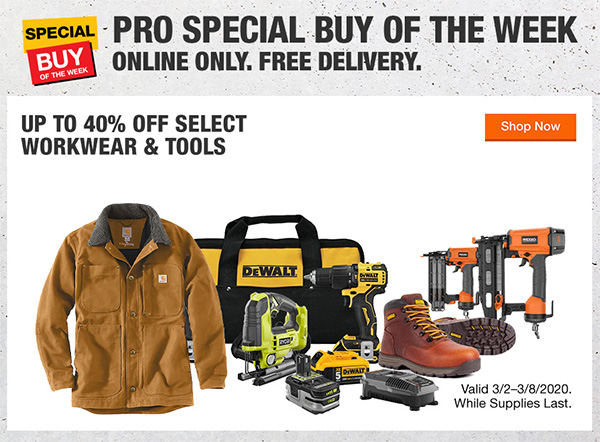 It’s worth clicking through to see what’s on sale, as there are a lot of surprises.

There are some non-deals as well. $299 for Dewalt’s brushed motor circular saw or reciprocating saw with 2x 5.0Ah batteries, a charger, and a carrying bag isn’t a very compelling deal. I’d instead spring for a 20V Max brushless circular saw kit (1 battery) for $220 via Amazon.

OR, you can buy a Dewalt cordless power tool starter kit with the same 5.0Ah batteries, charger, and tool bag for $149 via Amazon (directly, less from 3rd party sellers) and either a brushed motor circular saw for $99 or brushless for $150.

There are a lot of good deals though, you just have to either know the regular pricing or double check competitive pricing, just to be sure.

There are some exclusions, but it looks like a gross majority of CPO’s offerings are eligible for the coupon offer, even tools that are typically price-fixed, such as Dewalt’s DWS779 miter saw.

Valid on select items,qualifying items are identified on the product page.Offer not valid on Honda or SawStop items.

This is a good time to gear-up on tools and equipment that are rarely discounted.

Also keep in mind that CPO is running a similar deal to Acme’s ongoing “up to $150 off Milwaukee bare tools” deal. The discounts don’t stack. You’ll have to do some math to see which deal is better. For example, let’s say you only want to buy the new Packout jobsite radio. The Milwaukee bare tool deal gives you $30 off $299. With this new promo, you can add $3-$5 accessories or Bosch drill bits to your order to top $300 and get $50 off.

Shop This Deal via CPO Tools

It looks like Tool Nut also has a “buy more save more” deal on Milwaukee M18 cordless power tools. The deal looks to end today, 3/3/2020.

Shop This Deal via Tool Nut

Acme Tools has quite a few tool deals ongoing right now, but here are some that I haven’t seen at other retailers at the moment: 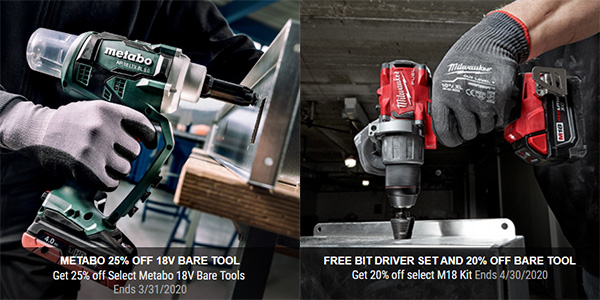 International Tool: Save 10$ on Fein Oscillating Multi-Tool Accessories, Plus Free Tumbler on $50+ Orders 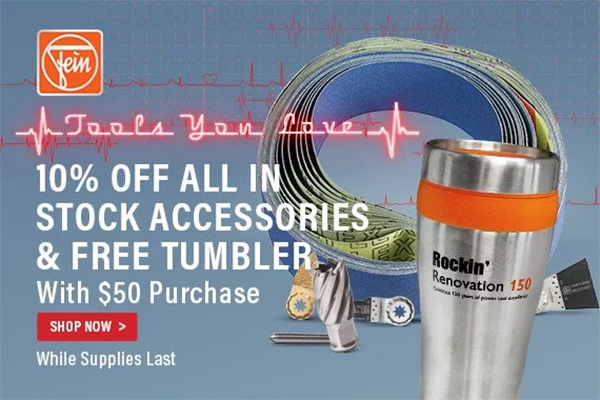 Over at International Tool, while supplies last, save 10% off in-stock Fein accessories – mainly oscillating multi-tool blades and attachments – and get a free tumbler.

I tested the promo, and see the 10% discount applied in-cart to accessories and sets priced at less than $50, and if your order of eligible items is over $50, the Fein stainless steel cup is automatically added to the cart.

Shop This Deal via International Tool

International Tool has free ground shipping on $149+ orders, and smaller orders look to be charged a flat shipping fee of $9.99.

So, for the greatest savings, either stock up on Fein accessories, or take a look at some of International Tool’s other deals.

Shop Other Deals via International Tool

To put it frankly, Amazon’s tool deals have been lackluster. Combing through pages and pages of no-name accessories, I found a page of Dewalt cordless power tool deals, plus an air compressor, miter saw, and angle grinder. These tools are at typical seasonal/holiday pricing, which isn’t bad, but it means there’s not much to see.

Shop This Deal via Amazon

If you’re willing to sort through the list, the following link is to Amazon’s other home improvement and tool deals.

There’s a Swanson 7″ speed square lighting deal that looks to end at ~ 3:10pm ET, a sponsored deal listing of a Dewalt 4 gallon wet/dry vacuum, a corded Skil drill for $30, a Craftsman benchtop jointer that’s on sale for $289 (regular $299), and a bunch of other misc tool deals.