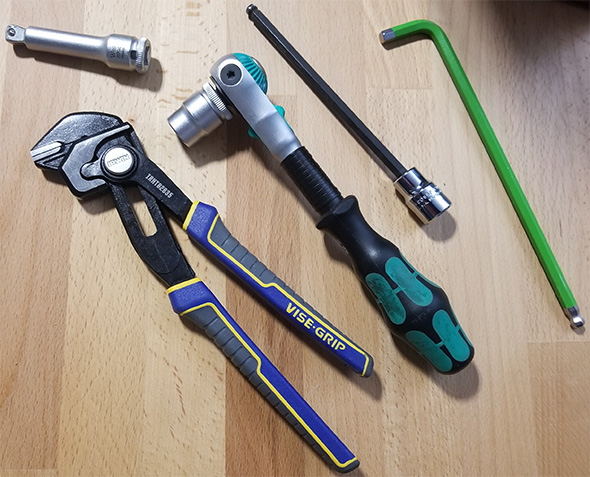 I worked on some assembly and disassembly projects yesterday, putting some new and favorite hand tools to use. Let’s talk about.

First up, I got in some testing time with the new Irwin adjustable “pliers wrench” style pliers. I like them, but they’re not on-par with the Knipex Pliers Wrench.

The two brands of tools have similar functionality – smooth parallel jaws that exert a lot of fastener-gripping power.

The Irwin pliers differs from Knipex’ design by being significantly less expensive, and also featuring a ratcheting adjustment mechanism. To adjust the Knipex Pliers Wrench, you have to use trial and error until you dial in on the perfect setting. With the Irwin, you simply slide the moveable jaw closed around the fastener.

I can use the Knipex Pliers Wrench as a sort of open-end ratcheting wrench, loosening handle pressure to open the jaws slightly for repositioning. Turn, backtrack, turn, backtrack, repeat until tightening or loosening task is complete.

With the Irwin Vise-Grip pliers, I couldn’t. The jaws wouldn’t open wide enough to clear the hex corners so that I could grab the next set of flats. So, I had to turn, reposition, turn, reposition, repeat 5 times and give up. I grabbed a 9/16″ combination wrench, and it worked much better. I overcame my laziness and went inside for a 9/16″ socket.

The Irwin Vise-Grip pliers wrench was a good match for adjusting leveling feet, however.

I also found that I liked the Vise-Grip handles, and I liked them a lot. You can get the Knipex Pliers Wrench with comfort grips, but with the Pliers Wrenches as pricey as they are, I didn’t want to spend that much when I purchased my basic-gripped versions a few years ago.

I need more time with the Irwin pliers, but so far I think it’s fair to describe them as competent, at least compared to the Knipex Pliers Wrench. Compared to other adjustable pliers, they’re quite good, and I like them.

In yesterday’s post about the new Milwaukee ratchets, someone asked about the pros and cons of a quick release button. Well, yesterday’s work was a great example.

I paired a long reach 1/4″ ball hex socket with a Wera Zyklop Speed ratchet. It’s a swivel-head ratchet with quick-release button. I should mention that it’s not a typical quick-release ratchet.

Shown here is a typical quick release ratchet, with a push-button unlock. These are Kobalt Pro90 ratchets.

The Wera Zyklop Speed has a large push button, but that wasn’t the problem. It works fine with Wera sockets, when you align the clearance hole. My ball hex bit socket doesn’t have a clearance hole, and although there are recesses, the ball detent didn’t engage well enough, and the socket kept pulling off the 3/8″ drive after final tightening of each bolt. It was an annoyance, although a mild one.

With a quick release, you have to be a little more conscious about how you apply pressure if necessary. In my case it was necessary because of how each fastener had to be accessed.

I also found myself wishing that I had a 3/8″ impact wrench on-hand. I had a compact 18V-class drill within reach, as well as a 12V-class drill and a 12V-class screwdriver, and those might have worked better for my needs due to their adjustable torque clutch. But… I don’t know where my 1/4″ hex to 3/8″ drive adapter went. I have a 1/4″ to 1/2″ adapter handy, but that wouldn’t help here.

My 1/4″ PB Swiss Tools ball hex key is starting to show some wear. Honestly, as much as I’ve used it these past two years, I’m impressed, as I expected it to show wear sooner. Still, engagement is spot-on, and as always it was a joy to use.

The last tool to be discussed from the main photo is my Wera wobble socket extension, which I pulled from the same set as my 9/16″ socket. Wobble extensions are great to have for when a fastener is so close to an obstruction that you can’t quite fit or swing a ratchet otherwise. The Wera 3/8″ drive 3″ wobble extension is $13 at Amazon. If I were building up my ratchet and socket drive tool accessories up again, I’d probably buy a Tekton set ($32 via Amazon) and then upgrade once I knew which sizes and styles I used most.

Which of these tools would you want to learn more about?

Also, minor news – I changed my Instagram name, from @toolmag to @toolguyd.