ToolGuyd > Power Tools > Cordless > ToolGuyd Giveaway: Skil His and Hers iXO Cordless Screwdriver Kits
If you buy something through our links, ToolGuyd might earn an affiliate commission. 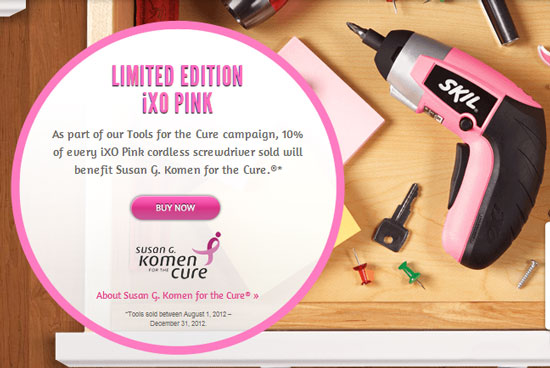 With October being Breast Cancer Awareness Month, Skil has launched a new special edition pink iXO cordless screwdriver. For every pink driver sold through December 31, 2012, Skil will donate 10% ($4) of the drivers’ unit price ($40) to the Susan G. Komen for the Cure foundation. Skil has guaranteed a minimum donation of $100,000.

We decided to partner with Skil to give away his and hers iXO cordless screwdriver kits. We will also be reviewing the pink and red iXO drivers later this month, but first wanted to kick off the giveaway.

To enter to win, simply leave a comment at the end of this post. You can talk about what you would use this screwdriver for, who you might give the pink or red driver sets to, what you think about the corkscrew attachment, or digress and remark about something else Skil or tool related. You can also tell a joke or share a story.

The pink and red iXO screwdrivers are currently available via Amazon, Lowes, and other major retailers.

Skil’s microsite for the iXO also offers details about their Susan G. Komen donations plans, as well as product information for the iXO tools and attachments.

The giveaway ends October 31st, at which time we will randomly select a winner. Eligibility to win is limited to those who have contiguous USA addresses.