ToolGuyd > Editorial > Why ToolGuyd Purchasing Decisions Do Not Always Make Sense
If you buy something through our links, ToolGuyd might earn an affiliate commission. 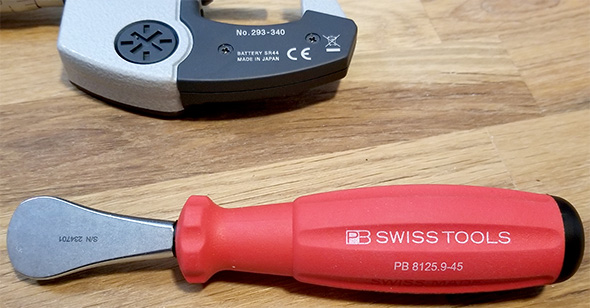 Last year I wrote about the PB Swiss “Coin Driver” screwdriver, a screwdriver meant to take the place of large coins in opening easy-access battery doors and other such devices.

It actually has come in handy, such as to open the quarter-turn glass side panel on my computer case. There, a quarter didn’t provide enough torque, and a slotted screwdriver marred the fastener a little.

But, if not for ToolGuyd, I’d never buy this for personal use.

Yesterday, I wrote about how my garden hose reel continues to leak and that I was planning to test out a rather pricey garden hose reel. Those two things, the leak and the decision to purchase a more premium replacement, are not exactly directly related.

Sometimes there’s a little pushback to the things I say, the tools I buy, or the way I do things. Yep, I go overboard at times, and other times my intent isn’t always clear or my rationale clearly articulated. But there’s a lot behind a lot of these decisions and actions.

Take the garden hose reel as an example. For purely personal use, I’d replace the end fitting or the hose itself, and that’d be fine. The cheap hose reel would continue to be as frustrating to use as it has been, but I don’t think I would replace it so quickly.

Suncast now has a couple of like-styled hose reels, but with brass fittings. I guess that for personal use, I’d see if they’d replace some of the leaky fittings on my unit with an upgraded part. If not, I’d still seek a warranty replacement part before spending money on the feeder hose or new fittings.

Even prior to the new leak, or rather the increased leak volume, I’d been eyeing reasonably priced replacements. I also have a list of models I briefly considered upgrading to last year. But, I didn’t budge.

I recently asked for reader input on garden hose quick connect fittings, and there were a lot of recommendations for Eley. I started looking into the brand, and that was before I replaced the washer in my plastic hose reel and it started spraying me in the face with water from the reverse side of the fitting.

I’d think a typical user would keep the reel operational until it broke, and then upgrade to an incrementally better model. I’ve looked at things extensively, and it seems that spending up to 2X the price, landing in the ~$60 price range, gives you a different form factor, but with just as many user complaints about quality as for the cheaper products. Going to 3X the price, with the 1X price being the ~$30 I paid for my mostly plastic hose reel, gets you added features that look to meaningfully impact the user experience. There aren’t a lot of options just above $100, with the next step-up being at ~$175 and up, all the way to $300. Above ~$250, you’re paying more for vastly increased hose capacity.

With my hose reel, I haven’t been overloading it – it has a 175 foot hose capacity, and I’ve been using it with a 50 foot hose, soon to be replaced with a 75 foot hose. The reel I’ll buy to replace this for primary use will have a 100 foot hose.

But I’m not a typical user. Many of my purchasing decisions are definitely steered by what I’ll describe as editorial curiosity.

How much better can a $200 hose reel be compared to a $25 model? What does it offer compared to a more premium (~$100) plastic model? Will a “coin driver” be a useful tool, or a single-task paperweight? Are premium ratcheting screwdrivers really that much better than less expensive alternatives?

I need to find out.

Before I started ToolGuyd, I slowly built my tool collection to suit my needs, hobbies, and work. I did a lot of research and visited Home Depot, Lowes, and Sears too often and for too long, with the goal of buying the best and most appropriate tools I could afford and justify. I stretched my small budget as much as I could – inexpensive or discounted tools were great, but cheap tools I’d have to replace later on were not.

There’s only so much that I can learn about certain tools without putting my hands on them.

Today, I still seek the “best and most appropriate tools I could afford and justify.” I can afford a little more now than I could 10+ years ago, but ToolGuyd really skews things in the justification department.

For personal use, I might have purchased say a $65 garden hose reel to replace mine once it broke for good. Since it’s been a hassle to use, I probably would have put the newer hose reel in the front and the still-working reel in back for less frequent but continued use.

I didn’t discuss that I’ve watched for sales and it must have been two times this season and maybe once last year that I almost bought the mid-level plastic hose reel at promo pricing. I say almost because the user reviews aren’t any more positive than the unit I bought two years ago. My reel isn’t universally loathed, but users report a lot of problems with these reels, and that was also true when I first bought it.

But with ToolGuyd backing me, I can answer the question that came up recently:

Are Eley’s quite pricey garden hose reels so much better than cheap plastic alternatives?

As a personal purchase, I don’t think I could justify this. Sure, the Eley would land on my wishlist, and it might have been the hose reel I purchased after the next one. Or, I might have continued inching upwards slowly, each time spending a bit more.

If the question is nagging enough, and I think there will be value in its exploration, I’ll jump up a few price levels for the sake of editorial curiosity.

It was maybe 14 years ago that I had to buy a rubber mallet. I bought a USA-made Craftsman model from Sears for maybe $12-$14, which was considerably lower priced than the white rubber Estwing I wanted instead.

These days, instead of wondering about which one would better suit my needs, I might buy both, as it’s something I could report on. For one, I do often need to use rubber mallets in different places, and having two has proved to be beneficial and justified. If I bought two and only needed one, that unneeded tool would have been donated or given away once the exploration and reviews had been complete.

I am lucky to be able to test and have tried out a lot of the latest and greatest tools that have come out in the past couple of years. But, there are certain tools where a review sample or even a loaner might be inappropriate, for lack of a better word. ToolGuyd policy also requires me to purchase tools needed for use, with few exceptions.

A lot of my purchasing decisions are “loaded,” with there being a lot of background research and intertwining editorial constraints or influences, but I don’t always go into the details for the sake of brevity.

I realize that it might look like I’m considering a $200+ hose reel to replace a $25 plastic hose reel that needs minor repairs or replacement parts, but it’s not as simple as that. Heck, if not for ToolGuyd, I wouldn’t have even purchased that plastic hose reel, I would have used what the previous homeowners left behind.

ToolGuyd has fueled and furthered my editorial curiosity, and it can be tough to draw distinct lines when talking about things.

Where possible, I like to be able to experience tools at opposite ends of a spectrum, or at least at multiple pricing levels. Doing so provides context and insights. If there’s interest and opportunity, and our sample budget can afford and justify it, why not?

It has perhaps become too natural and ingrained in me to explore questions and products of reader interest (or potential interest) and suited for ToolGuyd content plans, that I sometimes forget how my intent and thought processes are not as transparent as I’d hope them to be. Or maybe I’m lazy – my thought processes can be difficult to navigate at times, and even when as well-sorted as possible, who wants to read that?

I’m going to have to be better about explaining some of my/ToolGuyd’s purchasing decisions or paths in the future, but it’s always been hard to do. “Brand A sent us a [tool review sample]” and “Thank you to Brand A for providing a review sample” are clear ways to make it known when a tool was provided at no-cost for editorial coverage.

How could/should I describe or differentiate tools or products that are purchased with editorial coverage and exploration purposes in mind? Perhaps intent and actions would be clearer if I more often described ToolGuyd as a separate entity? It’s not me that buys or reimburses for test samples or supplies for contributors, it’s ToolGuyd.

While I separate self and ToolGuyd in my tool purchasing actions and intent, maybe it would be appropriate for me to describe things as if I were a contributor and not owner/editor? I’m starting to feel that this distinction in my writings has not been as clear or present as I assumed or tried to maintain. I’ll work on it.

Also, look for a “what do you want to see reviewed?” post in coming days. Our budget is tighter this year, but I always leave room for some requests. I don’t think I would have learned about Eley if not for reader recommendations – I would have focused on home center brands and availability. What other unfamiliar tools or brands will your interests and questions steer me towards?