ToolGuyd > Power Tools > Saws > Updated Look at the New Festool SawStop-Equipped Table Saw
If you buy something through our links, ToolGuyd might earn an affiliate commission. 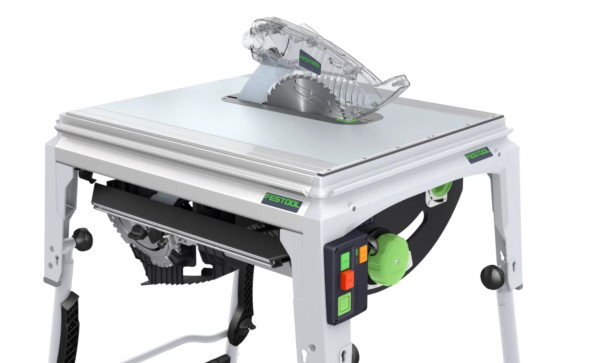 We still don’t have details on availability, and whether this saw will even come to the US market, but there are still plenty of details to look at.

Update 11/13/19: Festool has informed us that this product will be released in the European market and that at this time a USA launch is not planned. SawStop will continue to be the exclusive TTS-owned solution for North America.

Closer Look at the Top

Starting at the top of the new Festool table saw, it has a relatively simple design. Size-wise, it looks to have about the same tabletop space as a compact 10″ portable table saw.

Notably, it doesn’t look to have a traditional miter slot, but a closer looks shows a miter gauge stored under the top, which must attach to the side of the table. It could also be a sled-based mechanism, which Festool has available for their CMS router table and European-market table saw setup.

Festool does already have a CMS mobile table saw configuration and a “Precisio” table saw, and the new SawStop-equipped model looks to borrow from those designs.

The saw sits on four legs that appear to be broken into two sections. The top 12″ or so of the legs are permanently attached to the top and have rubber feet, and so I imagine you can use the table saw directly on these short legs. Below these there foldable adjustable legs, which I would presume are designed to line up with the top of a Festool MFT table, so you can use their system to expand the cutting area. 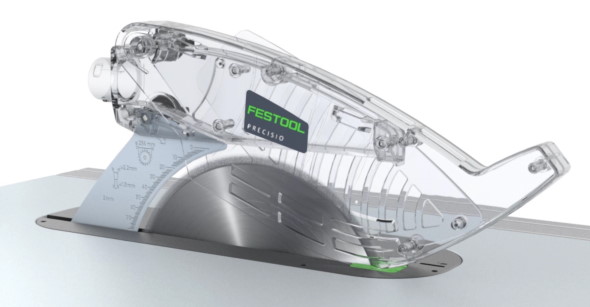 The saw blade is shrouded in a clear plastic safety guard, with a vacuum port at the back. There’s almost certainly a dust port below the table as well. The riving knife has a cutting height guide, which is nice detail. 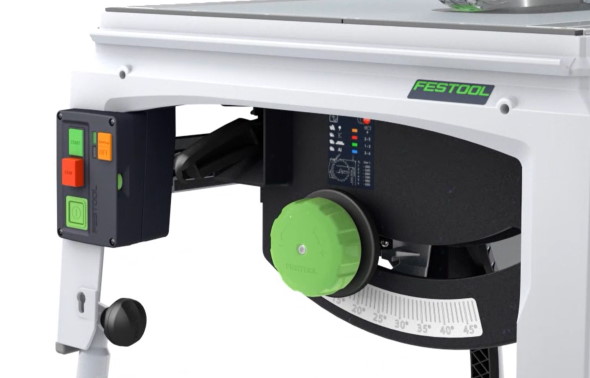 The front panel has a prominent “off” button, and a flush “on” button. The panel also has an indicator that the safety brake is correctly engaged. SawStop table saws also have override buttons, for when cutting wet lumber

The big green dial looks to allow you to adjust the height of the blade, and perhaps the angle as well, but it’s not clear. 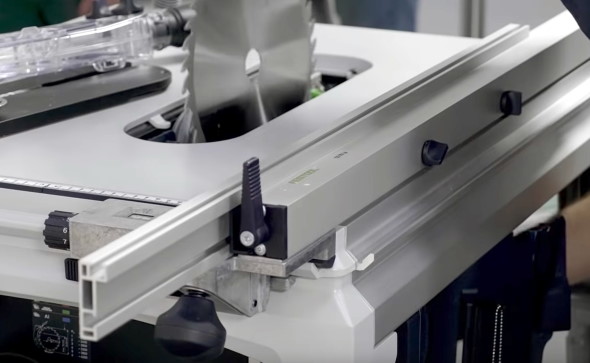 The fence shown in the most recent video appears to have some extras features that increases its functionality. It appears that you can slide the face of the fence outwards a bit, giving you more contact area for your workpiece. On the left there’s a micro-adjuster for fine-tuning the cutting width.

It doesn’t look like the fence can extend beyond the table, which implies the cuts are limited to ~12″. This might be logical given that the audience for this saw are likely to have a track saw already, and so the table saw might be mainly used for trimming long cuts of material instead of breaking down large sheet goods. 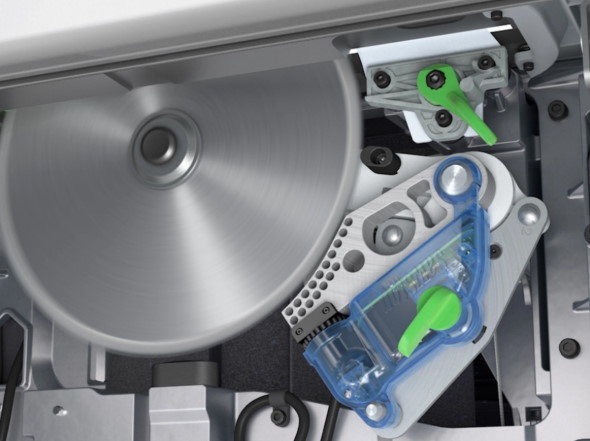 Looking beneath the table surface, you can see the SawStop braking mechanism. This is likely for illustration purposes because the video shows the break cartridge being replaced from the top of the table.

Festool says that after the protection system is activated, it only takes a few minutes to replace the brake cartridge and saw blade.

My fingers are very important to me. Table saw injuries are often horrific life-changing events, and they happen more often than they should. I’m happy to invest in tools that increase the safety of my workshop. Table saws in particular are tools that I approach with a lot of care. While there’s a lot of controversy surrounding SawStop, their patents, and their practices, having their safety technology more widely available is great. There’s a lot to like about what Festool is are doing here, and there is bound to be a good market for it.

Some of SawStop’s patents look to be expiring soon, and it remains to be seen if or how other brands, such as Dewalt and Bosch, will take advantage of this to integrate similar safety technologies into their own table saws. For instance, will Bosch’s short-lived Reaxx table saw, which used different braking technologies, return to the market, or will we see new and different designs?

As a reminder, Festool’s parent company acquired SawStop in 2017.

SawStop recently updated their jobsite table saw, and this new Festool model looks like it will be aimed at finish carpenters and others who deal with final and finer construction projects. SawStop teased about a $400 saw back in 2017, but that project has not yet come to fruition.

It will be interesting to see what will happen after more brands than just SawStop and Festool can produce table saws with flesh detection and active injury mitigation technologies.

Update 11/13/19: Festool has informed us that this product will be released in the European market and that at this time a USA launch is not planned. SawStop will continue to be the exclusive TTS-owned solution for North America.