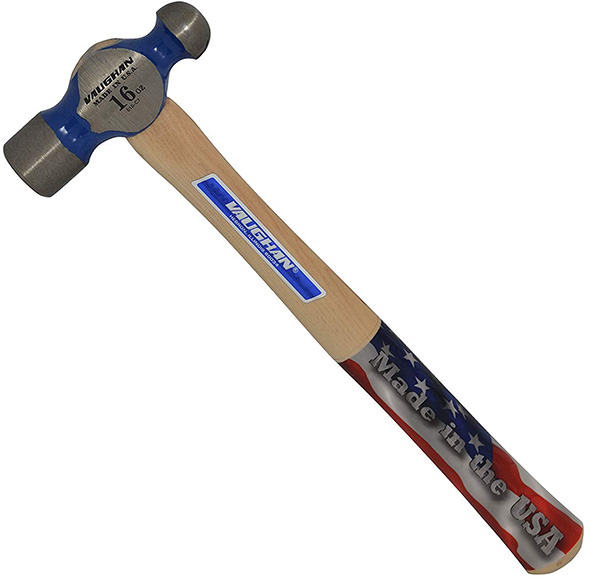 I can’t tell you when I bought my first Vaughan ball pein hammer, but I can tell you why. When I started working on more serious hobby and DIY fabrication projects, I knew I needed a center punch to lay out my holes to higher accuracy. And what do you need for striking center punches to set their mark? A ball pein hammer. (Some brands will advise that a drilling hammer be used for this.)

At the time, I did a lot of reading into the matter and learned that claw hammers, for driving nails into wood, are often very hard and should never be used to strike metal tools. A ball pein hammer is not hardened to the same level, and as such they should be less prone to chipping. Is this still true? Honestly, I can’t say. Also, while I’ve marred the polished faces of my hammers, I’ve yet to deform them. My ball peins aren’t so hard that metal-metal strikes caused them to chip, but they’re definitely not soft either.

You can *probably* get away with using claw hammers for some tasks although it’s not advised. It is often recommended that claw and framing hammers be used to drive nails, with their claws used for nail-pulling and other prying tasks, and ball pein (or ball peen) hammers for striking metal chisels or for other metalwork.

Ball pein hammer heads have a standard flat striking face on one end, with the edges often beveled, and a ball-shaped face on the other.

I like ball pein hammers for metalwork, and have always had an affinity for Vaughan’s wood-handled ball pein hammers. They’re inexpensive, and mine are well-made and still comfortable to use.

I started off with a 16 oz hammer, which is a good size for a lot of different metalworking tasks. I use lighter ball pein hammers with smaller punches and chisels, and heavier ones for bigger tools and tasks. But, 16 oz still strikes me as a good all-around size. If I had to go back in time, it might still be my first ball pein hammer size.

I have used the ball end on occasion, but rarely.

It took me some time before I bought a 12 oz hammer, because it wasn’t proportionally less expensive than 16 oz ball peins. It still irks me a little, but it makes sense. There’s not much of a difference in material, but the production is largely the same. Maybe lower demand affects the pricing too. I do feel that 16 oz is a good “starter size” ball pein hammer, but if you think that a slightly lighter hammer will serve you better, consider the 12 oz.

I got over the psychology of it by buying a metal-handled 12 oz hammer.

I tried a few different ball pein brands and styles over the year, and now have a couple of sizes and styles up to 32 oz. I tend to use the smaller sizes most. I don’t feel too bad since the larger sizes were ordered on sale (e.g. the 32 oz was less than $11 on Amazon back in March 2008), and still come in handy for heavier striking and metal-forming tasks.

Even though 16 oz is probably the heaviest ball pein hammer I use very regularly, I feel it was and still is a good place to start. I have found that a lot of people have either “just one” ball pein hammer, or several. The 16 oz size is heavy enough while still being manageable, and you can usually choke up if you need a lighter strike.

Personally, I don’t like the idea of owning “just one” ball pein hammer, but if I had to, it would probably be this size.

For those of you that use ball pein hammers regularly, what would your recommendation be?