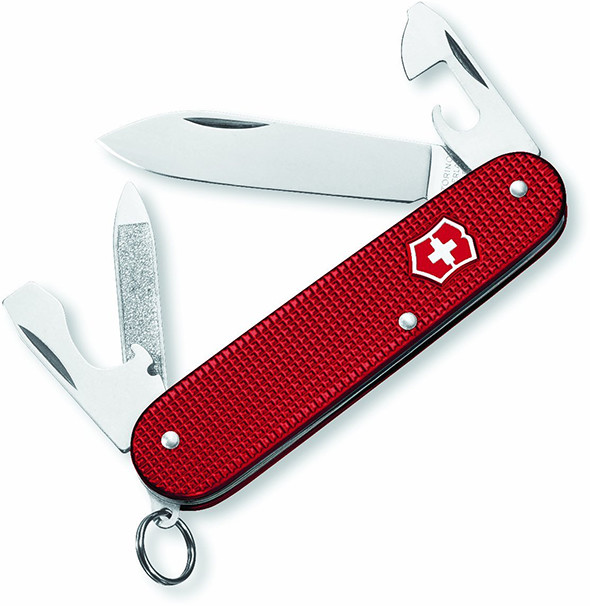 I don’t see anyone using that wire stripper notch, but maybe it’ll come in handy in a pinch.

I was also surprised to find that the larger slotted screwdriver can lock in at 90° or the usual 180°. I’m guessing the right angle position is for higher torque applications?

My new Victorinox Cadet only just arrived from Amazon, and I can’t wait to start putting it to use. The knife blade looks to be a useful size, and the other tools might see some use too.

I chose the red color, and it’s more vibrant than I anticipated. Silver and black handles are also available. If you’re willing to spend a little more, you can find the 2016 special edition, with purple (“Orchid Violet”) handles.

This was my first Victorinox purchase in a few years. I’ve used the mini “classic” keychain Swiss Army Knives plenty of times, but I really prefer Leatherman’s Style CS better. Anyways… the Cadet is quite a bit larger.

I don’t see myself adding the Cadet to my keychain, but it’ll serve nicely as a compact pocket knife, in rotation with the Moki Ezo Red Fox that I reviewed some time ago.

One of the best parts is that the Cadet weighs almost nothing.

Its textured handle gives a good grip, the knife and tools are well-made and useful, and it’s highly pocketable.

I have 2 regrets. The major regret is that I didn’t buy one sooner! But ask me again after I’ve used it some more. Right now the only use has been the typical “ooh, I’ve got a new knife/tool” checkout, and I’m still in the honeymoon phase.

Second – I kind of wish I went with the silver or black color. I didn’t go silver because I have too many bare metal-colored pocket knives. I debated about black or red, and went red because that’s the traditional Victorinox Swiss Army Knife color.