ToolGuyd > Hand Tools > Mechanics' Tools > Deal: Wera 9pc Ball-End Torx Key Set for $13
If you buy something through our links, ToolGuyd might earn an affiliate commission. 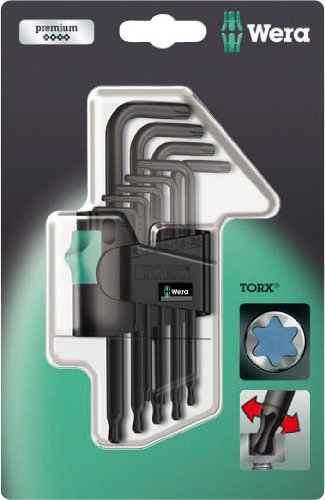 Last week we posted about a hot deal on Knipex mini pliers that we found using ToolGuyd’s Amazon Deal Finder search tool. We asked readers if they could find other great deals, and received a couple of good deal mentions.

Tom found a deal on these Wera ball-end Torx L-wrenches. I couldn’t pass up the deal, and my ordered set arrived yesterday. They’re actually pretty neat.

While I have plenty of Torx drivers, I could use another L-key set, and the deal price was too good to say no to.

Regular Torx keys have straight tips on both short and long ends. These have ball-end tips on the long end. I use ball-end hex keys almost exclusively, and figure it might be worthwhile to have similar features on Torx keys.

The ball-shaped Torx end should be useful for accessing fasteners from anything other than head-on angles. They can also of course be used head-on.

I have found that, even when a fastener is not obstructed, and is easy to access from straight head-on, ball-end hex keys offer easier engagement. I will usually use the short straight end of an L-wrench for initial loosening or final tightening, or a socket, or other non-ball-end tool.

I haven’t used these Torx wrenches at all yet, but will let you know what I find out. Will they be as useful as ball-end hex keys? I hope so. And if not, maybe they’re at least as useful as regular double-straight-end Torx keys.’

The Wera set I received yesterday was made in the Czech Republic. It also arrived in a small easy-open product box, and not the plastic card packaging as shown in the photo.

If you want a USA-made version, Bondhus has a number of BallStar L-wrench sets, starting at $30 for 8 pieces.

This Wera 967 PKL/9 Torx key set seems to be priced at $27 to $32 elsewhere, leading me to believe the low Amazon price is temporary.