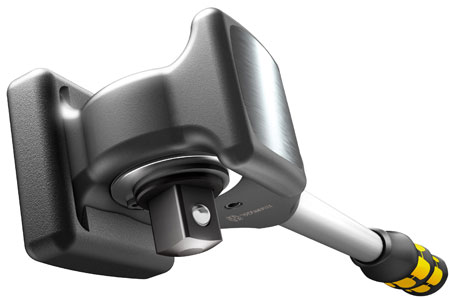 Wera has recently announced the Koloss, a new heavy duty 1/2″ drive addition to their lineup of innovative ratchets. Even stranger in appearance than Wera’s swivel-head Zyklop ratchet, the Koloss features a ratchet built into a hammer head. Yes, that’s right, the Koloss is a real ratchet-hammer combo tool that is said to be unbreakable.

While the notion of a ratchet-hammer combo tool previously seemed outlandish and bizarre, Wera’s new Koloss ratchet actually looks to be a solidly built and useful tool.

In order for the Koloss to be as indestructible as possible, Wera implemented a push-through reverse mechanism instead of a traditional reversible selector switch. To change ratchet directions, one must simply push the double-ended male square drive from one side through to the other. 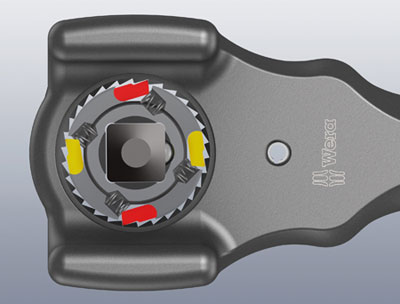 The Koloss also features a fine tooth double pawl mechanism with a return angle of 6°, allowing the tool to be used effectively in cramped environments.

To prevent accidental loosening or separation, the Koloss’s ratchet-hammer head is form-fit and pinned to the round shaft. The hammer head can be used as-is, but Wera has also designed a slip-on removable rubber protective pad that can be used to help prevent marring or damage to target materials and surfaces.

Lastly, the ratchet mechanism is easily disassembled for easier cleaning and maintenance.

I have never been one to use my ratchets as hammers, but I have seen others do this on more than one occasion. Apparently such improvisation happens somewhat regularly, or at least enough to have inspired Wera engineers to develop the Koloss.

Hammering capabilities aside, the Koloss heavy duty ratchet does look incredibly rock solid, and I bet that it can handle a LOT of abuse. On the downside, this ratchet is not exactly low-profile or suitable for use in compact areas, but given its sheer awesomeness this can be easily overlooked.

The Koloss is available for purchase from ChadsToolbox or Amazon.com.

Credit goes to reader Uthscsaedu for the find – thanks!