ToolGuyd > DealGuyd > Hot Deal of the Day: Save on WERA Tools (2/21/20)
If you buy something through our links, ToolGuyd might earn an affiliate commission. 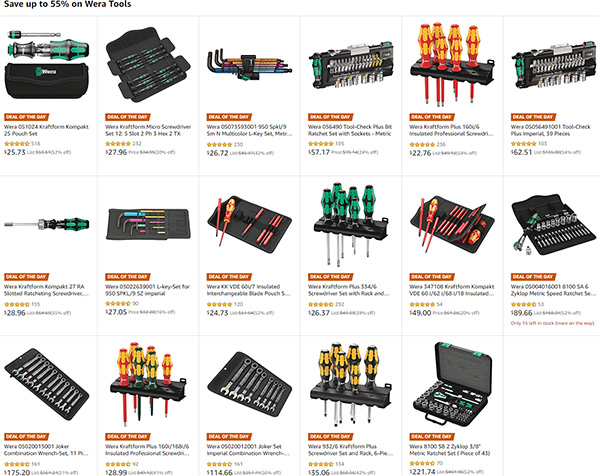 Today only, Amazon is holding a Wera Tools deal of the day where you can save up to 55% on 17 select tools and sets.

As you might know, I’m a big fan of Wera hand tools, and I purchased quite a few of my Wera tools from Amazon deals of the day just like this one.

A lot of these tools are at great pricing.

Other than that, I’d buy my Wera screwdrivers (large and precision), bit sets (they come with a mini bit ratchet and compact screwdriver handle), socket set, and hex keys all over again.

According to Amazon, I bought my 6pc Lasertip screwdriver set 10-1/2 years ago, in July 2009. I haven’t used the slotted screwdrivers very much, but the Phillips drivers see frequent use and are still going strong.

I actually don’t have a set of Wera hex keys, just a couple of loose sizes, and am struggling to find justification for another set. Maybe I’ll wait on those until another deal of the day comes around in July or so, for Prime Day.

If you’re new to Wera tools, consider the Kraftform Kompakt multi-bit screwdriver as your first taste of the brand’s quality. It has a locking bit holder that can extend and even be removed for cordless drill/driver use, and on-board bit storage. Or, the Tool-Check Plus is a nice little kit, with mini bit ratchet, screwdriver handle, and an assortment of screwdriver bits and sockets. I bought a mini bit set first, and later these versions which come with the added handle option and a couple of sockets.

Are you going to take advantage of this deal to pick up something from your wishlist?

I’m still eyeing the imperial hex key set, and am wondering if I need a second multi-bit driver or 6pc set.