ToolGuyd > Storage & Organization > Western Dovetail Mobile Tool Cabinet Assembly Log
If you buy something through our links, ToolGuyd might earn an affiliate commission. 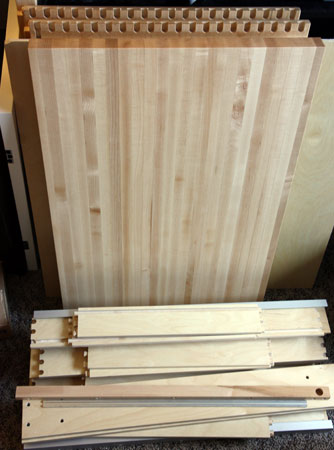 As I mentioned the other day, I recently assembled a Western Dovetail mobile tool cabinet that I had won in a contest. Most of the photos taken during the build process was during the “before” and “after” stages, but they should still be able to give you a good picture of how everything fit together.

Following is my project-log for the cabinet assembly. For the sake of keeping this short(er) and more focused, a full review of the cabinet will come later on. 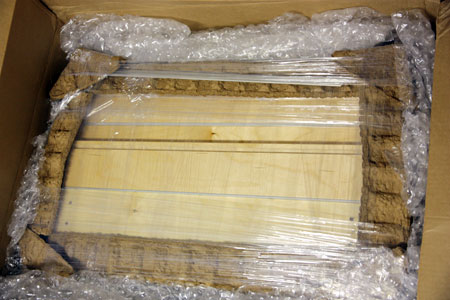 This packaging was among the best I have ever seen. Althought each bundle was “flat packed”, the cabinet’s 1/4″ backing board managed to suffer a minor ding at one corner during transport, but it was easily hidden during assembly. 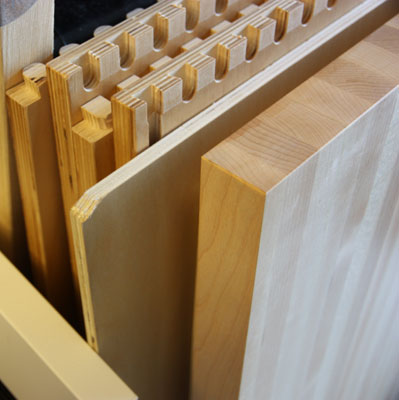 Max emailed a complete set of assembly instructions prior to the cabinet’s arrival. They were clear and easy to understand, and the photos came in handy at times. Max was also very responsive to emails, so it was good to know that help would be readily available if I ran into trouble.

Very few tools were required for the cabinet’s assembly, but I used a few others to make the job a little easier. In case you were wondering, the tools are arranged on top of the cabinet’s awesome maple work surface! 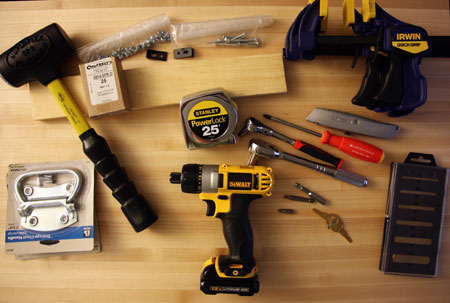 The tool cart’s construction is broken down into a few basic steps: 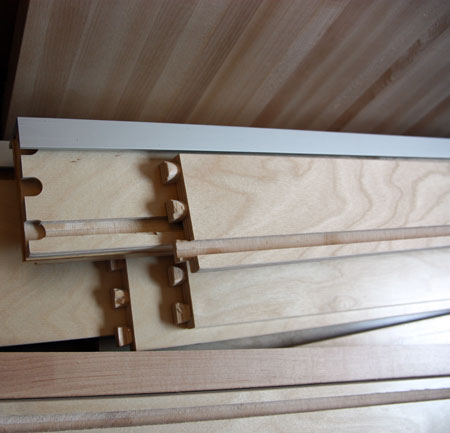 The dovetailed drawers were quick and simple to assemble, and the ball bearing slides were easy to attach to their sides. To assemble the drawers, the sides are attached to the drawer backs one by one. The bottom support is slide into a routed groove, and then the drawer front is added. A block of wood and dead blow hammer made this a rapid process.

To attach the drawer slides to the drawers, all I had to do was align them to pre-marked lines spanning the length of each side, drive in a few screws, and they were good to go. The finger-pulls came pre-installed.

The cabinet itself was somewhat more difficult to assemble due to the long row of dovetails that needed to be matched up. As with the drawers, the cabinet’s dovetails were gradually hammered together and the parts fit together snugly and evenly. While the glue dried, the cabinet was clamped together with pipe clamps and right angle clamps, although the assembly was tight enough that I don’t feel that this was entirely necessary. 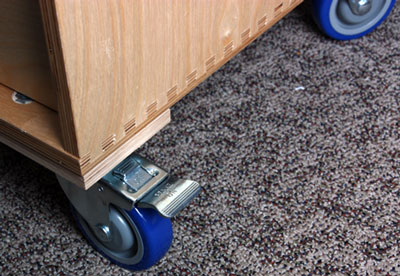 For extra support, cleats are attached to the bottom of the cabinet. Two casters were first half-attached to each cleat using bolts and T-nuts. Next, two longer bolts per caster passed straght the cleats and attached to T-nuts on the cabinet base. This way of securing the cleats and casters in two steps made the assembly extremely quick and precise.

At this point, I installed the drawers into the cabinet for a test-fit. Some alignment was necessary, but it didn’t take too long. Once I was satisfied with the drawer spacings and positions, I removed the drawers and installed the locking system. This is where I ran into a snag. 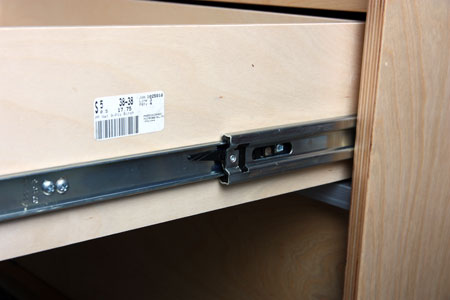 The way the slides on the top two drawers were positioned, the stops for the drawers kept hitting them when the drawers were closed. I had adjusted the height and alignment of the drawer slides and secured them with additional screws prior to installing the locking system, so it was too late to go back and fix things. My options are to shave the plastic triangular lock blocks, or install customized blocks in the future. I am fairly certain that this issue could have been avoided had I planned ahead better or installed the locking bar and drawers at the same time. For the time being, I’m leaving the top two drawers unlockable.

Last but certainly not least, it was time to install the maple butcher block top. And oh, what a fantastic work surface it is! The installation kit included large washers and flat head screws. I decided to use identically sized pocket hole screws instead. There was either one extra mounting hole or one missing washer, so I used a self-tapping truss head screw at this location.

I did not install the included handles yet, and will keep that final step on hold until I decide how I want to accessorize the sides of the cabinet.

Overall, the build process was a LOT of fun, and everything went along quite smoothly. There is also a LOT more to say about the cabinet, which is why the review will be written up separately.

Thank you to Max Hunter and Western Dovetail/Drawers on Wheels for the awesome prize! You can be sure that I’m putting the cabinet to good use!

You can find out more about this RTA kit over at Drawers on Wheels. For an in-depth build log and DIY how-to, check out Max’s writeup over at Extreme HowTo.

A few additional photos can be found in the gallery on the next page: